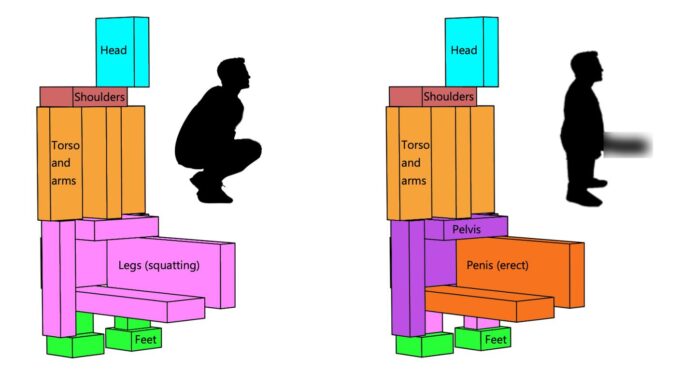 Plans to install a sculpture by Antony Gormley at Imperial College in London have caused concern among the university’s students who claim the work to be “phallic”.

ALERT, a six-metre-high stack of cantilvered steel blocks meant to resemble a squatting human figure, is scheduled to be placed in the newly built Dangoor Plaza as part of a major redevelopment of the university’s South Kensington campus.

But according to a motion released by the Imperial College Union that aims to prevent its installation, the work may “hurt the image and reputation of the college”. This is due to the “obvious” interpretation of its form as that of a person bearing their sizeable erect penis, the motion argues. The motion continues, under this interpretation, that the phallus—which Gormley intended as a protruding knee—extends “approximately three meters horizontally”, which is around half the total height of the sculpture.

“While the artist’s intended form may ‘[evoke our] community of scientific research’ the phallic interpretation does not,” the motion reads. “The name ALERT could also be understood as referring to the statue’s phallus being erect,” it continues.

Of key concern to the union is how the phallic interpretation may be considered “exclusionary”, considering the gender imbalance of both students and staff at Imperial College. The university has one of the highest male to female student ratios in the UK, with just 39% of fulltime students at the university identifying as female in the 2020-21 academic year, according to official university statistics.

Students were not consulted about the sculpture, and now are moving for its installation to be blocked. The motion stresses that there is “nothing inherently wrong with phallic imagery in art” but that the “phallic interpretation’s preoccupation with the penis could be considered inappropriate for a grand public display, especially given the statue’s size”.

It adds that official publicity for the statue has chosen an angle in which the sculpture does not appear phallic, suggesting that this interpretation, and its current backlash, was “not unforeseen by some individuals within the college”.

In a statement about his sculpture published on Imperial College’s website, Gormley said “Balancing on the balls of the feet while squatting on its haunches and surveying the world around it the attitude of this sculpture is alive, alert and awake”. The sculpture is a gift to the college from the billionaire venture capitalist and alumnus Brahmal Vasudevan.

“Despite the support within the Union, and that the paper has apparently been seen by senior college staff and Gormley’s team, I doubt that it will affect the installation of ALERT,” says Alex Auyang, a research prograduate at the university who submitted the motion. “I think that this is not the sort of thing that the college would pull out of or listen to students about.” Imperial College did not respond to a request for comment by the time of publication.

This is not the first time Gormley’s sculptures have been subject to lewd interpretation. Last year, a quartet of iron sculptures by the artist installed on a beach in the English seaside town of Aldeburgh were found to violate local planning laws and were described by local residents as resembling “sex toys”.