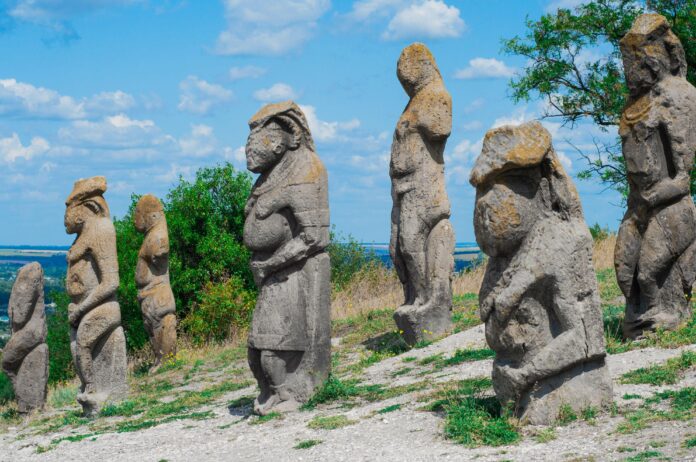 Several sacred Polovtsian statues known as stone babas, dating from the ninth to the 13th century, have been destroyed during Russia’s six-month occupation of Izyum. A strategic city in the Kharkiv region, Izyum was liberated by the Ukrainian Armed Forces on 10 September. Hundreds of mass graves were also found, underscoring calls for charges of war crimes against Russia.

On 18 September, the art historian and journalist Oksana Semenik, who posts under the Twitter handle Ukrainian Art History, posted photos of the stone babas on Mount Kremenets before and after the occupation, spurring comparisons to terrorist organisations. “Reminds me of the Taliban destroying Buddha’s statues in Afghanistan,” wrote one commenter in response to Semenik’s tweet. “Just like ISIS destroyed Palmyra,” wrote another. However, it has not been established who was responsible for the destruction of the monuments.

In her post, Semenik also described the sacred significance of the stone babas: “Sanctuaries with effigies were a place for performing the memorial cult of ancestors, not directly related to burials.” Polovtsian is another name for the Turkic Cuman nomads who populated the area.

She also noted that “many of the Polovtsian [stone] women depict men”. While “baba” means grandmother in Ukrainian, in reference to the statues it “comes from the Turkic word ‘balbal’ meaning ‘ancestor’ or ‘grandfather’” and so stone babas “portray both male and female figures.” They are also referred to as kurgan stelae.

As part of Arsenale 2012, the first Kyiv International Biennale of Contemporary art, the cultural venue Mystetskyi Arsenal featured an exhibition of nearly a hundred authentic stone babas titled Ancient forms: a Modern Point of View. A number of these came from museums that are currently in Russian-occupied areas of Ukraine, such as Kherson and Zaporizhzhia, and from Crimea, which Russia annexed in 2014. The goal of the stone babas exhibition at the biennial was to present Ukraine’s artistic heritage “as a significant and equal part of the world cultural achievement,” wrote Art Ukraine magazine explained in 2012.

Tymur Bobrovskyy, a Ukrainian archeologist, pointed out in a Facebook post this week following the outcry that the stone babas were destroyed on 24 March and in April were listed in Culture Crimes, the Ukrainian culture ministry’s online database of cultural heritage destruction caused by the Russian invasion, “but for some reason no one was interested until now”, he wrote. Kateryna Chueva, Ukraine’s deputy minister of Culture and Information Policy, commented on Bobrovskyy’s post that the ministry will soon receive new photos from the site.

In 2016, Ukraine’s official Twitter account posted the Izyum statues with the hashtag #BeautifulUkraine and compared them to one of the world’s most famous monuments: Wonder what Ukraine and Easter Island have in common? Their stone babas!”