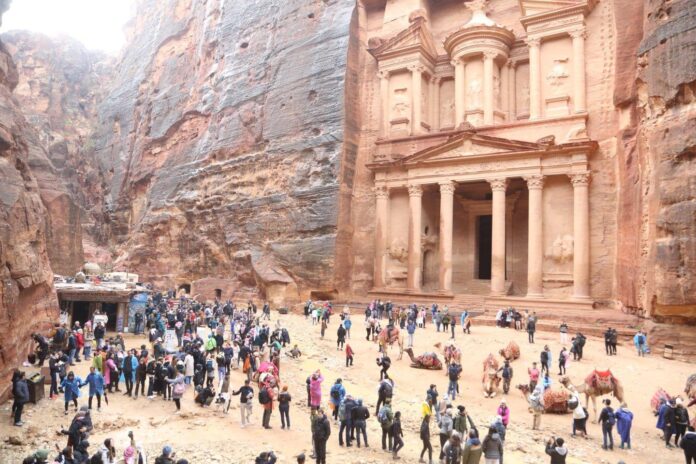 Tourist routes have reopened at the ancient site of Petra in southern Jordan after flash floods engulfed the Unesco world heritage site earlier this week. A video posted on social media by Joyce Karam from the Middle Eastern news website Al-Monitor shows water cascading down cliffs, turning into a river of mud in the walkways of the popular tourist destination.

A spokesman for the Petra Development and Tourism Region Authority, says: “The site is in the best condition and tourists have been entering the site as usual since yesterday morning [27 December]. On Monday we had 1,790 tourists, [on] Tuesday around 3,000 tourists and today [28 December] a little more.”

In a statement posted on Facebook, authority officials add that they are “periodically maintaining the early-alarm [floods] system and operate about nine monitoring stations that measure the height of the water”. New aerial observation stations are due to be installed at appropriate locations in the Petra region.

Raed Al-Khattab, the director of the Jordanian Meteorology department, stressed that the topography of Petra “helps floods [to develop] and the amount of rainfall that fell on the area—80 millimetres in some parts— is considered large”.

It is unclear whether the flash floods caused lasting damage to the site but Karam writes that “Petra dates to around 3,000 BC [and] has withstood human and natural disasters. Current storm not believed to be a threat to the structure.” In 2018, more than 20 people were killed in floods in the area according to the BBC.

Petra is known for its elaborate tomb facades carved into sandstone cliff by the Nabataeans between the first century BC and the fourth century. In 2003, a French and Saudi-led archaeological excavation began on the site, which was a key stop on the incense and aromatics trade routes; it was added to Unesco’s World Heritage List in 1985.

According to Unesco, the monuments at Petra, are “vulnerable to flash flooding along [the town of] Wadi Musa through the winding gorge (Siq) if the Nabataean diversion system [comprising an ancient dam] is not continually monitored, repaired and maintained… there is a long-term need for a framework for sustainable development and management practices aimed at protecting the property from damage resulting from the pressure of visitors, while enhancing revenues from tourism that will contribute to the economic and social viability of the region.”

Yes, Mr Doodle Did Cover Every Square Inch of His 12-Room Mansion With Doodles