Home News ‘We are stepping out and owning the space’: Santa Fe Indian Market’s... 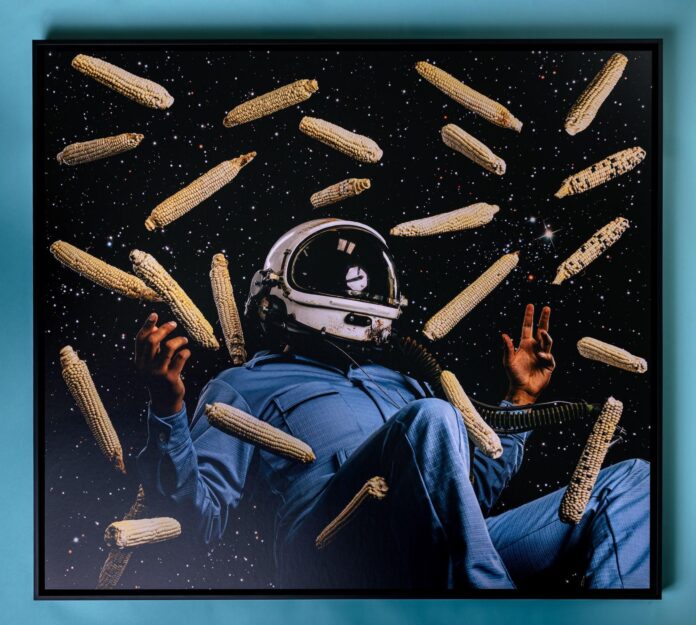 Even rain couldn’t keep the Santa Fe Indian Market from springing to life.

On 20 August, thousands of visitors—under brightly-coloured coats and with umbrellas in hand—stormed the city’s historic Plaza for the Southwest Association of American Indian Art’s (SWAIA) centennial milestone.

In keeping with tradition, the organisation held all of the usual ceremonies, opening the sprawling annual fair for Indigenous art with a morning prayer and proffering this year’s juried “Best-of-Class” awards across ten categories. Russell Sanchez, a San Ildefonso Pueblo potter native to the region, took home the event’s “Best-of-Show” prize for his bejewelled polychrome jar, 100 years in the making! (2022).

Local arts pillars beyond the Plaza augmented the weekend’s festivities. SITE Santa Fe hosted a multi-decade survey of Jeffrey Gibson and a debut solo exhibition of Nani Chacon’s work. At the Center for Contemporary Arts, curators Danyelle Means and Kiersten Fellrath assembled works by 13 rising Indigenous artists in the group show Self-Determined. And the Museum of Contemporary Native Arts at the Institute of American Indian Arts (IAIA) hosted a number of hard-hitting programmes, including a critically-acclaimed set of Athena LaTocha’s Mesabi iron pour sculptures.

According to a SWAIA spokesperson, more than 800 artists from across the Americas participated in this year’s edition of Indian Market (20-21 August)—all of whom belong to one of the federally recognized tribes in the United States and Canada. Altogether, more than 200 nations were represented at the Market, a figure SWAIA’s current leadership intends to grow in future iterations.

Through a partnership with IllumiNative, which bills itself as a Native women-led social justice organisation, conversations about the previous century and plans for the next were conducted in panel-style discussions throughout both days of the event. Should SWAIA have its way, meaningful success for the Market and other events like it hinges on partners, allies and collaborators who are ready to let Native and Indigenous peoples take the lead.

A tale of two art worlds

The Santa Fe Indian Market’s raison d’être, currently the subject of a year-long exhibition at the New Mexico History Museum, has been to preserve Native and Indigenous art amid paternalistic concerns about the perceived threat of demographic and cultural extinction. Since its inception in 1922, during the assimilationist period of Federal Indian Policies, SWAIA’s leadership has largely steered the Market through this lens—an anxiety that has echoed through the decades and perpetuated a bygone era’s attitudes.

Angelique Albert (Confederated Salish and Kootenai), the chief executive officer of Native Forward—which claims to be the largest scholarship provider for Native youth—tells The Art Newspaper that in spite of incremental progress in recent years, mainstream media continues to ensnare Native and Indigenous artists in antiquated narratives. “The problem is how Native art is framed,” Albert says. “It’s trapped in time: historical, not contemporary.”

In a broader effort to seize control of the narrative, SWAIA had previously explored the possibility of sponsoring and hosting a contemporary art-focused offshoot called Art Indigenous. Plans for that event have not yet materialised, due in large part to administrative conflicts and internal expectations. But according to Jamie Schulze (Northern Cheyenne and Sisseton Wahpeton Oyate), SWAIA’s operations director, Art Indigenous remains a top priority for the organisation.

“Art Indigenous is an avenue for SWAIA to branch out into a contemporary voice,” Schulze says. “This contemporary Native voice needs to be included during our market. We are going to do this well, just not this year. What we need is for partners to see us as an ally. Santa Fe Indian Market, because of its beginnings, hasn’t always been able to be an ally to the rest of the world. We’re stepping into allyship with cultures across the globe.”

Attempts to break through popular perception and into contemporary art conversations can be traced in a lush, cross-generational exhibition at the Santa Fe gallery Trotta-Bono. Two remarkable pieces on view belong to Lloyd Kiva New (Cherokee), who is credited for co-founding the IAIA, a school that has nurtured artists including Neil Parsons (Pikuni), Larry Ahvakana (Inupiat) and Linda Lomahaftewa (Hopi and Choctaw). The school, which continues to train Native and Indigenous artists today, has created precious inroads into the contemporary art world, giving artists like photographer Leah Rose (Anishinaabe) a chance to innovate beyond labels and limitations.

Rose, who was raised on a reservation in Michigan, tells The Art Newspaper that while her work is formally disconnected from the visual traditions of her people, the medium of photography enables her to effectively pursue other avenues of storytelling, like dispelling harmful stereotypes and documenting the impact of climate change on Indigenous communities.

“My family lost a lot of knowledge because they went to boarding school,” Rose says. “So my work and my way of finding that path back is totally contemporary.”

Since taking over as executive director of SWAIA in 2020, Peone has leveraged her expertise in business and finance to approach the position from a content marketing perspective, accounting for SEO, data analytics and market opportunities. During her first year at the helm and in the thick of the pandemic, she spearheaded an ambitious (and, ultimately, successful) initiative to bring more than 450 artists and their work online, which entailed building websites and developing educational modules to close key knowledge gaps.

“That was the genesis of us thinking about how we support artists from a digital perspective,” Peone says. “Look at the digital divide in reservations. We feel we can be mobile with this initiative, and have a mobile unit that takes the technology into those spaces and helps individuals with pricing, marketing and imagery.”

“We are all natives from different communities, but we have the same underlying aspects,” Peone adds. “So it goes back to content marketing. What is the story? We are stepping out and owning the space, and it has so many different forms of expression and individuality.”

To accomplish this, Peone has adopted a multi-pronged, digital-first strategy, which includes building an e-commerce platform called Indigenous Collections (which has yet to launch), and brokering a partnership with a blockchain-based intellectual property (IP) security service called Imprint, which announced its launch on the first day of the Market. The company, which runs on the Stellar blockchain, has provided discounted rates to a number of Indigenous artists as part of its trial run.

“[Imprint is] a security tool,” co-founder Dogan Perese says. “There’s legally binding stuff here that’s creating a trail that’s enforceable. [Artists] have immediate IP protection. They have additional safeguards, like using the system to consign a piece. The artist creates the consignment, specifies the terms, specifies the discounts and galleries have to accept it, which is legally binding. Only if those terms are fulfilled does it go through.”

Peone emphasises that the impetus for securing these protections stems from economic necessity. “The idea comes from the Indian Arts and Crafts Act of 1990, a federal law that protects artists from the perspective of intellectual property,” Peone says. “But there’s a difference between the law and coming forth with an option to overcome the potential of being infringed upon. As we begin to penetrate new markets on a global level, we want to come alongside the artists with protection.”

Art dealer Ruth-Ann Thorn (Luiseño), who introduced the Imprint project to SWAIA’s leadership team, explains that legal and financial protections for commercial artists only comprise half the story. She says the technology is also compatible with Native and Indigenous artists whose practices fall outside the realm of market participation, citing as an example a woman from the Lower Sioux tribe who intends to document her grandmother’s quilts (which are only gifted as a cultural practice) for posterity on the blockchain.

“Protection of intellectual property for Native artists is important,” Thorn says. “As a Native woman and art dealer, we’re the group that gets ripped off the most. We haven’t had the money to fight about this in court. Some of these artists are coming from very remote places. If their design gets stolen at commercial websites, they don’t know what to do. And even if they did, how are they going to hire an attorney?”

SWAIA’s efforts to help artists cross the digital divide aren’t without their growing pains. Robert Dale Tsosie, a Picuris Pueblo and Diné sculptor, tells The Art Newspaper that alternative fairs like the Free Indian Market, where he set up his booth, capture integral contingents of the Native and Indigenous arts communities, including elderly artists who were unable to navigate SWAIA’s new electronic application system.

But Tsosie is quick to describe these oversights as a necessary part of the Market’s evolution. “Things change,” he says. “The people that come to Indian Market need to see more diversity from across the United States. Everybody is welcome.”

That the Market has a specific “Youth” class contender for Best-of-Show reflects a unified pan-tribal commitment. The importance of young people was emphasised at every turn during SWAIA’s events. Artist Juanita Growing Thunder Fogarty (Assiniboine Sioux), whose intricate Walking this Good Way of Life Together (2022) won Best-of-Class for beadwork and quillwork, said during her acceptance speech that she prays everyday for “future generations to find good partnerships in life”.

For some, like Kelly Holmes (Mnicoujou Lakota), the path forward comes down to “positivity”. Holmes founded Native Max Magazine, which promotes Indigenous artists across visual arts, fashion, and culture at large. The magazine celebrates its tenth anniversary this September and serves as a rare resource extending opportunities to artists often working in isolation. Les Fly (Lakota), a sculptor and jeweller who lives in South Dakota, told The Art Newspaper that the platform enabled him to travel to the Indian Market and promote his own work—an otherwise expensive financial investment.

Others, like Leon Misak Kinneeveauk (Inupiaq), are organising location-specific spaces dedicated to Indigenous artistic experimentation. As founder of Alaska Arts Alliance, which supports local artists, Kinneeveauk told The Art Newspaper he hopes to start a regional counterpart to SWAIA, adding that the availability of other events like Indian Market might ease the financial burden of artists travelling to Santa Fe without representation or knowing if they will make enough sales to break even.

Cara Romero (Chemehuevi), who won Best-of-Class in the painting, drawing, graphics and photography category, also spoke at length about the future. Her work, The Zenith (2022), is a photograph of an obscured figure wearing an astronaut’s helmet, surrounded by floating ears of corn and distant stars. Romero, whose Water Memory (2015) series was acquired by the Metropolitan Museum of Art, described this figure as an icon of Indigenous futurism.

“We have already been through an apocalypse as native people,” Romero said. “This piece has a sense of fun, fantasy and hope […] that imagines him in a wonderful future.”