Home News What I Buy and Why: Ed Cross on Collecting African Artists Before... 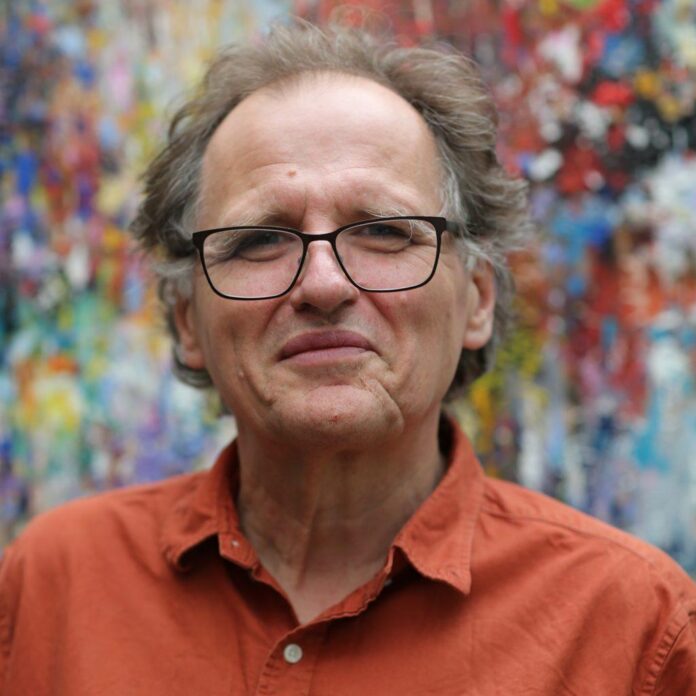 Ed Cross has been championing the work of African and African diaspora artists since he founded his eponymous gallery 13 years ago. A former artist himself, he has also long been a collector—though he started out with a considerably more modest budget than he has now.

In May, Cross opened the gallery’s first permanent space at 19 Garrett Street in London. The gallerist has just debuted the inaugural summer show at the new digs, which presents work by seven artists including Pabi Daniel, Leah Gordon, and Abe Odedina.

We caught up with the gallerist, collector, and artist about his adventures buying and selling African art before it became a market force, how he stores his own impractically scaled works, and why he missed out on the chance to get in early with Jadé Fadojutimi. 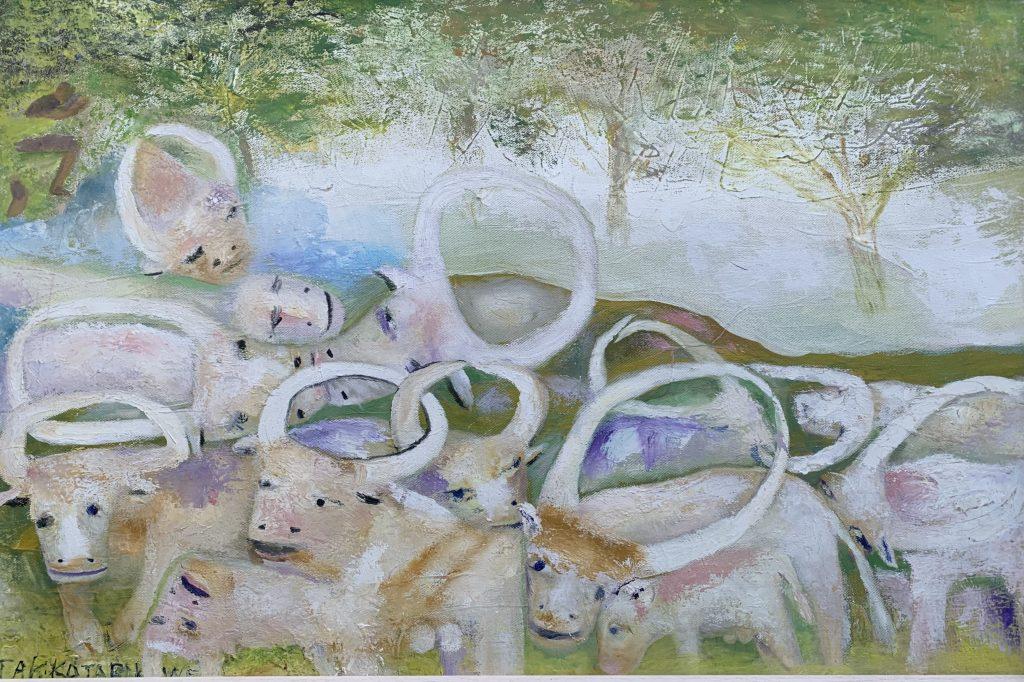 My first purchase was a woodcut by the Ugandan master Jak Katarikawe. I stumbled on a show of his in a hotel in Nairobi in around 1989 and fell in love with his work, whose expressive brushstrokes and lush vegetation reminded me in part of the work of Australian artist Arthur Boyd that I’d admired as a child whilst living in Melbourne. I tracked Jak down to a seedy hotel called the Pigalle, living in a room stuffed full of his own work, and I bought a print, which I gave to my sister for her wedding present. I went on to buy two of his paintings in the following years.

Jak, who was uneducated in the Western sense and could only write his name, was a former traditional dancer turned painter—his paintings were full of Ankole cows, who have a sacred status in his community. I was delighted when Michael Armitage paid homage to Jak and other East African masters who influenced and inspired him in his recent show at the Royal Academy.

As an art dealer, a lot of gems pass through your hands and it really is tragic when one doesn’t acquire at least some of said gems. For a long time, I was rolling a ball up a hill with contemporary African art—prices were low and my earnings for a man with family commitments were modest, so collecting my own artists only became a serious thing in the past few years.

Early this year, I signed up a truly brilliant artist from Accra, Pabi Daniel, an exceptional painter just 22 years old, whose work is intense and surreal to reflect the times we live in—an old head on young shoulders, one could say. One of the first things I did was buy two of his paintings for myself and my wife, Chinwe. One of these is illustrated here. 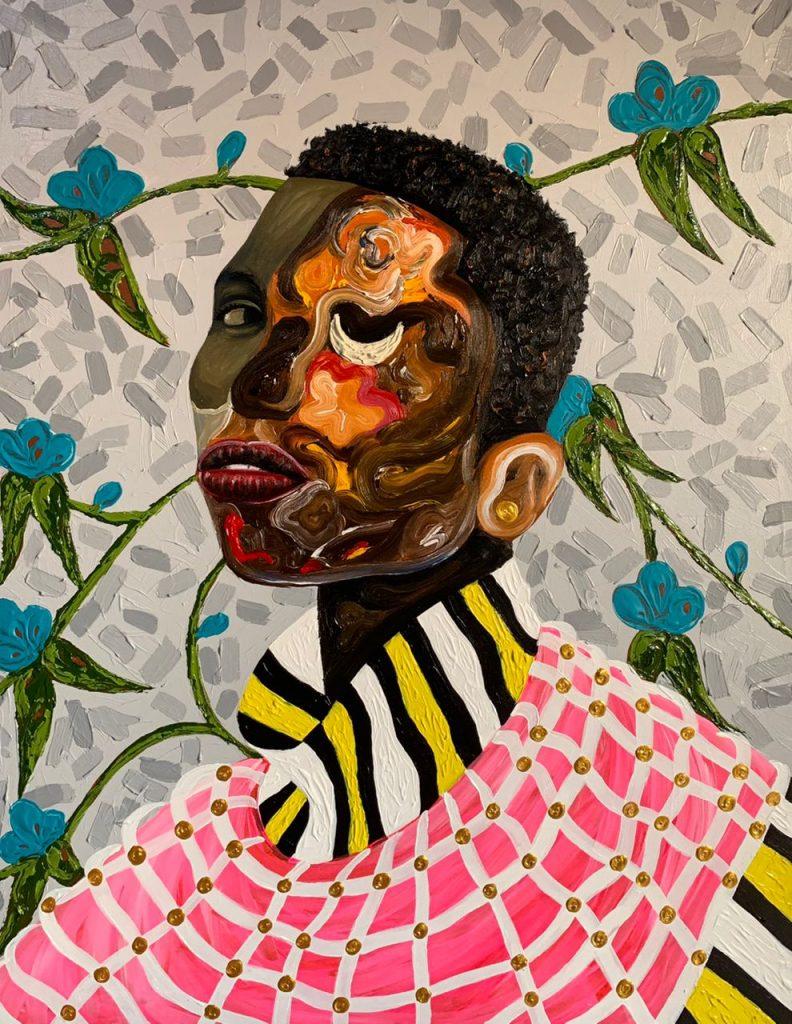 Last year, I came across the work of Miranda Forrester after a tip-off from my friend, the Israeli collector Serge Tiroche. Miranda is now represented by Tiwani Contemporary and I acquired one of her works from them. I am interested to see her next show and, if the stars are in alignment, to buy another piece. Looking close to home as usual, I think it’s high time I bought works from Wole Lagunju, whom we will show in September, and the formidably talented and overlooked British/Jamaican artist Eugene Palmer, whom we are showing in November.

One of the highlights of last year was launching the career of the incredible painter Sahara Longe. I bought one of her best earlier works, Sally and Amadu, and the value of that is really anyone’s guess. A really tiny work from her sold at a Whitechapel Gallery charity auction for around £60,000. 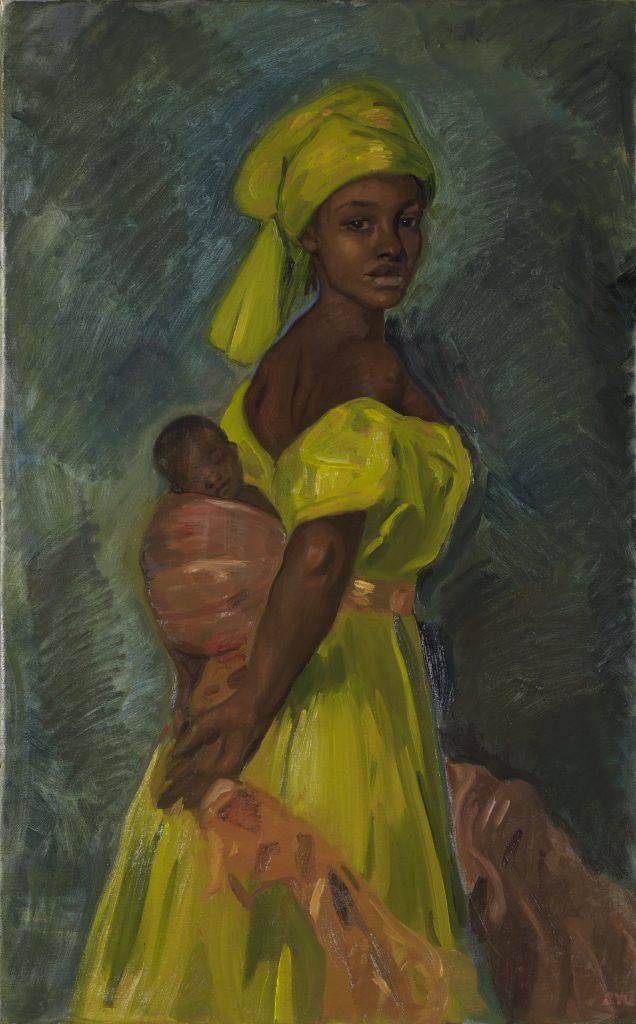 From myself/the artists that I work with. 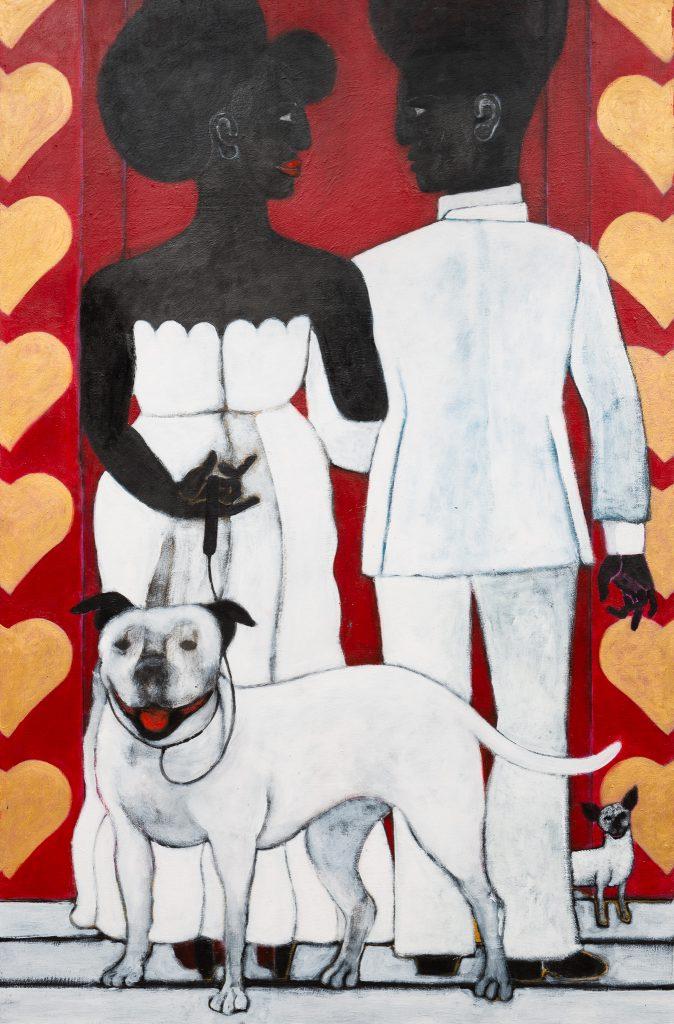 Near my sofa is Abe Odedina’s Eye to Eye, which, to my surprise and delight, Abe and Sarah gave to us as a wedding present.

In the bathroom, I have a lovely seascape on a plate by my oldest friend’s daughter, India Dewar. It was an invitation to her Dad’s 60th birthday. Underneath this is by my seven-year-old son, Ikenna. 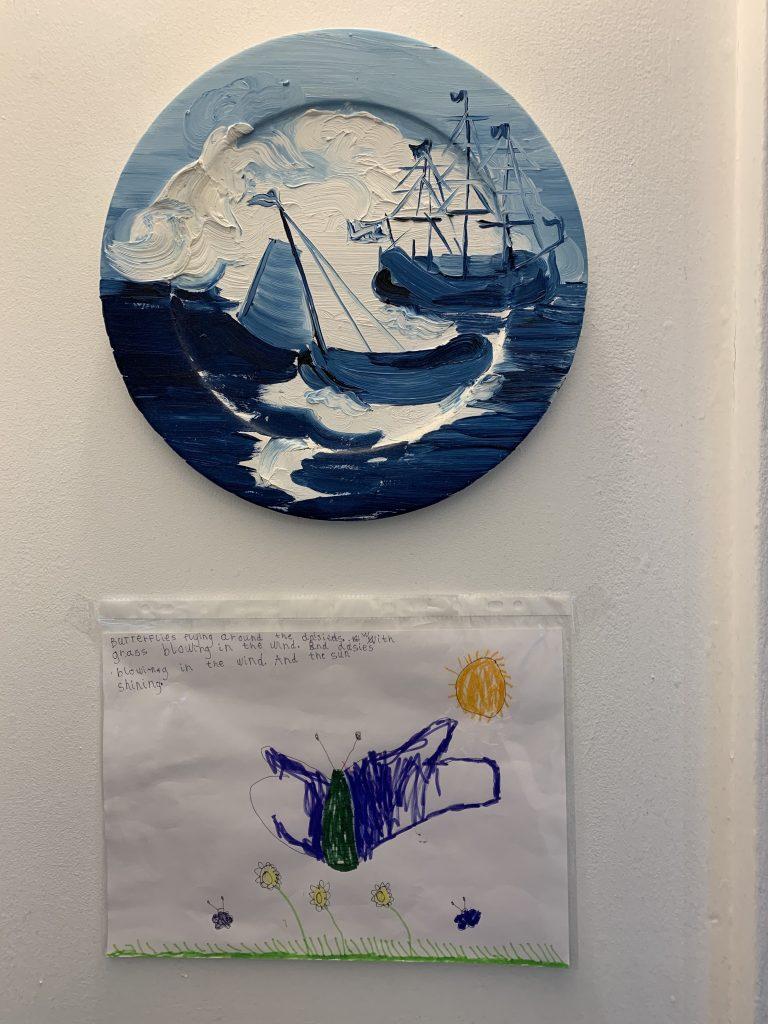 Probably my own sculptures created during the seven years when I called myself a sculptor. I created a body of work from ruined and abandoned Indian Ocean canoes in a collaboration with termites and sea slugs, etc. Some of these were very big and very heavy—need I say more?

A few years back, I noticed the work of Jadé Fadojutimi via Instagram and asked if I could come and see her to talk about potentially collaborating. Several busses later, I got to her studio in South London and very quickly established that, as she had no wish to reference Nigeria or Africa in her work in any shape or form, I was never going to work with her—and, indeed, she was already represented. As I was leaving, I asked about the price of her fabulous large canvases stacked against the wall. I thought £20,000 was a fair price, but a little out of my range.