Home News Banksy mural, and the Los Angeles building he painted it on, head... 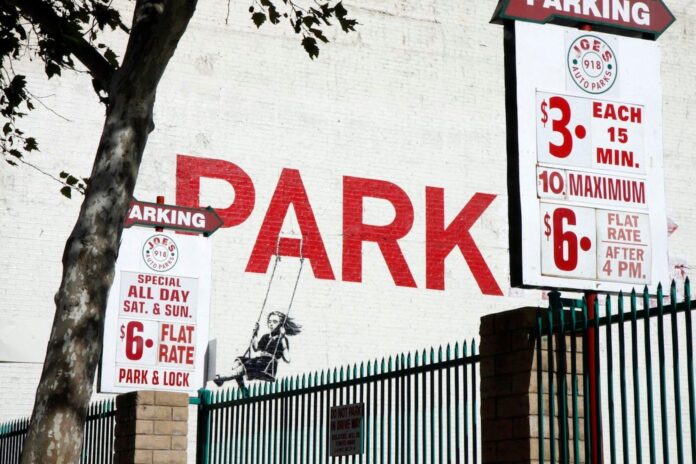 A famed building in downtown Los Angeles featuring a large mural by the secretive artist Banksy is headed to auction. The Banksy at 908-910 South Broadway features a girl swinging from the A in a pre-existing “parking” sign. It appeared on the building in 2010 not long before the Los Angeles premiere of the artist’s documentary Exit Through the Gift Shop.

The Banksy adorns one side of the seven-storey building, which was purchased by designer Tarina Tarantino and Alfonso Campos of the brand Tarina Tarantino for $4m in 2007. As part of a bankruptcy filing in April of this year, they agreed to sell the building at auction. The sale is being handled by national real estate firm Hilco, which is accepting bids until 20 October 2022.

But unlike Banksy editions, prints and paintings intended for the art market, the artist’s public art pieces are notoriously difficult to extract and sell, or even have appraised, in no small part because the artist has denounced the practice. “This is free public art. It is not meant to have a commercial value and be resold,” dealer Jeffrey Deitch told the New York Times. “That’s not the intention of the artist.”

According to their bankruptcy filing in April, Tarantino and Campos estimated the building’s worth at $16m, though they told the Times they hope the allure of prime downtown real estate augmented with a famous artist’s work could send bidding up to nearly double that figure.

The current auction record for a Banksy work, set by his half-shredded Love is in the Bin at Sotheby’s in London last October, is £18.5m (including fees).

“This isn’t your typical real estate transaction,” Campos told the Times. “We understand the intrinsic value that the Banksy adds to the building.”

The mural’s value is especially challenging to assess because it may be difficult (and costly) to extricate from the building itself, as a book by Robin Barton released last year made clear. Earlier this year, the Banksy mural known as “Crowbar Girl”, which had been cut from the wall of an electrical shop in Lowestoft, was rumoured to have been sold for up to £2m in a private sale. In 2020, the owners of a house in Bristol that had been on sale for £350,000 took it off the market after Banksy created a mural on its exterior wall of a figure sneezing out her dentures.

That said, 908-910 South Broadway has more than a Banksy mural going for it. The 1914 building, designed by storied Hollywood architecture firm Meyer & Holler, was originally home to the L.L. Burns’s Western Costume Company, which supplied the costumes used in most of the Western films of the silent era. The building had a star turn of its own in the 1923 film Safety Last!, in which silent film star Harold Lloyd famously dangles from the hands of a clock on the building’s façade.

“This sale presents an unprecedented opportunity to own a treasured Banksy mural, a unique piece of Hollywood history and an icon of Los Angeles culture contained within a beautifully restored art nouveau landmark,” Jeff Azuse, Hilco’s senior vice president, said in a statement.