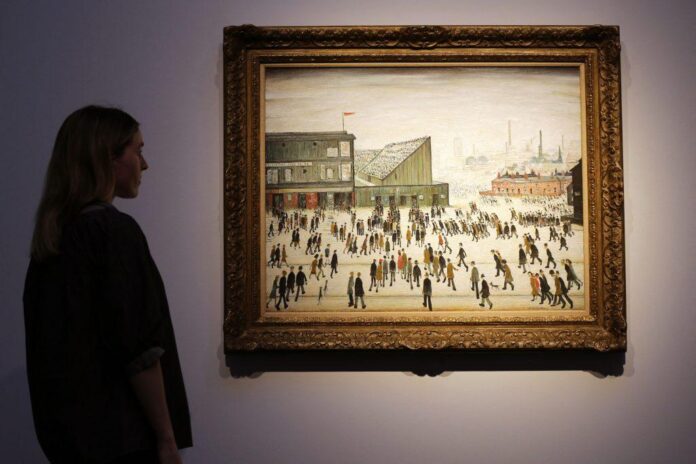 Wednesday night’s sale of modern British and Irish art at Christie’s in London put an end to the contentious saga over the fate of L.S. Lowry’s painting Going to the Match.

The mayor of Salford, England, stepped in last week to plead with wealthy donors to purchase the painting at auction so that it could stay in the artist’s hometown museum, the Lowry, where it has been housed for since 2000.

Ultimately, the Law Family charitable foundation donated approximately $8.7 million to help the Lowry museum in Salford purchase the work, ensuring it will remain on view for free on the late artist’s home turf. Going to the Match had been estimated to fetch between $5.6 and $8.9 million.

Operating as part of the Professional Footballers’ Association, the Players Foundation charity originally bought Going to the Match at auction for nearly $2.2 million in 1999. They loaned it soon after to the Lowry, where it’s hung ever since.

Earlier this year, the Players Foundation separated from the association due to an ongoing investigation into its management.

“In order to maintain the services we provide, the charity must achieve maximum returns from their investments,” Chris Hollins wrote in an email to Artnet News of its plan to consign the work at auction. After the sale, Hollins noted that the foundation was “pleased” with the outcome.

What? You didn’t already own this? How?

PS Congratulations on your new acquisition. I love the Lowry. My wife and I had our second date there.

Bidding on Lowry’s work opened around $5.6 million, the Guardian reported. A Christie’s auctioneer told bidders it was “selling for a good cause.” Proceeds will support current and former footballers with education, pensions, health, and legal issues.

In the end, Julie Fawcett, CEO of the Lowry, said the museum was able to purchase the work “thanks to an incredibly generous gift from the Law Family charitable foundation.” The paper described Andrew Law as a “hedge fund manager and Conservative party donor.”

The work will now live at the Lowry’s Andrew and Zoë Law galleries, though it’s not clear if these are new or existing dedications.

“This L.S. Lowry painting belongs in Salford on public view, close to his birthplace,” Law told the Guardian. “Place matters.”