Home News Who let the lots out? A pack of 19th-century dog paintings is... 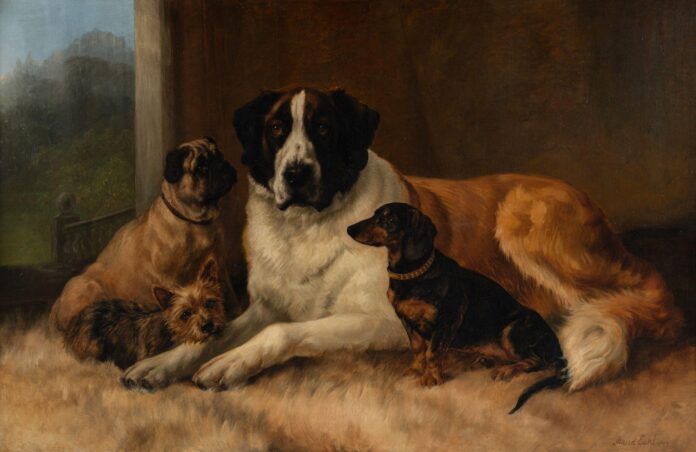 Puppy-loving collectors may find themselves barking bids at the auctioneer next month, when a unique collection of 19th-century English and American dog paintings goes up for sale at Hindman in Chicago.

The 14 paintings, which are from the collection of Palm Beach, Florida-based collector and philanthropist Frances G. Scaife, represent one of the most significant and comprehensive collections of this genre of painting, featuring works primarily by English artists such as John Sargent Noble, Maud Earl and John Frederick Herring the Elder, as well as the American Alexander Pope. The dog paintings are one part of a larger presentation of objects from the Scaife collection, which includes fine art, decorative arts and furniture, and will be presented across three auctions.

Scaife’s interest in dog paintings is an extension of a lifetime of animal advocacy and philanthropy. “Mrs. Scaife and her family are passionate benefactors of animal shelters and charities,” says Madalina Lazen, Hindman’s director and senior specialist of European art, who is overseeing the sale. “As a dog enthusiast, her love for animals has extended beyond philanthropy to her inspiring art collection, in addition to permeating other elements of her life. Mrs. Scaife has collected paintings and sculptures representing dogs over the course of many decades.”

Scaife’s collection offers a uniquely holistic view of a style of painting that thrived during the 19th century. “Increasing numbers of people began to have the time and money to take the dog beyond the role of companion and to make it a creature to be exhibited publicly and for the scrutiny of others,” according to a Hindman catalogue essay, and that newly reconfigured relationship led to an explosion of paintings featuring furry friends. The paintings could range from straightforward portraits, such as Herbert William Weekes’s diptych Pet Dogs (1879, est $1,500-$2,000), to sentimental scenes like Earl’s Four Friends and more virtuoso, technical displays of hunting ability, as seen in Edwin Armfield’s Two Hounds Chasing a Pheasant (est $1,000-$1,500) or Arthur Wardle’s Look Out! (1885, est $10,000-$15,000).

English dog paintings are not the only canine portraits having a paws-itive impact on auction house balance sheets this season. Last month, Edouard Manet’s Tête du chien “Bob” (around 1876) from the collection of Ann and Gordon Getty leapt above its $600,000 high estimate at Christie’s in New York, fetching $1.3m (with fees).