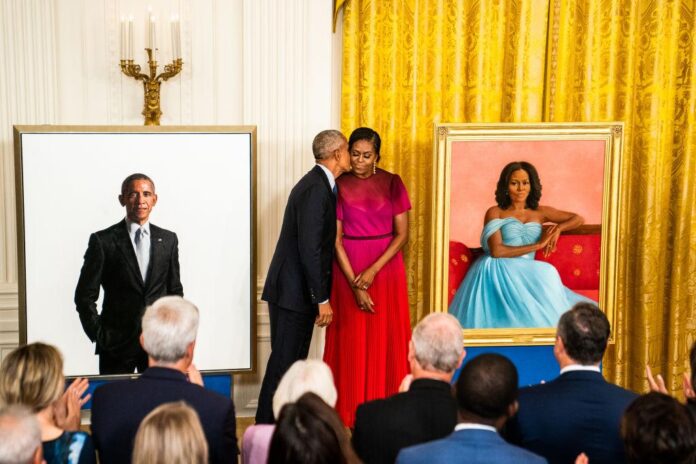 America went wild this week when former president and first lady Barack and Michelle Obama returned to the White House for the first time in five years to at last debut their official presidential portraits.

Normally, they wouldn’t have waited so long. The ceremony is usually held towards the end of the first term of a president’s successor. Given the rancor of recent U.S. politics, neither the Obamas nor former president Donald Trump wanted such an event.

Commissioned at the same time as the National Portrait Gallery’s vibrant portraits of the Obamas by Kehinde Wiley and Amy Sherald, these two new works by Robert McCurdy and Sharon Sprung required a more traditional style.

In the wake of the unveiling, Artnet News caught up with both McCurdy and Sprung, who painted Barack and Michelle respectively, to learn more about their historic experiences.

None of the four artists—Wiley, Sherald, McCurdy, or Sprung—got to see each others’ work until after they were done. While McCurdy noted his hyperrealistic portrait differs substantially from Wiley’s surrealist composition, Sprung found shocking similarities between Sherald’s depiction of Michelle and her own.

“It’s the same person,” Sprung told Artnet News. “There’s a certain grace and simplicity and quietness and presence to both paintings.” The poses even echo one another. Sprung said she hopes that all four works can go on view together someday.

The former president and first lady collaborated with Thelma Golden (director at the Studio Museum in Harlem) to select the artists for all four portraits, inviting prospective painters for interviews at the Oval Office before making final choices.

“We had actually been in the process of reaching out to [Barack] to see if he would sit for me when his office reached to me,” McCurdy recalled, saying that the president had been on his short list of dream subjects. “It worked out perfectly.”

McCurdy is no stranger to training his unflinching eye on famous faces. His previous subjects include Jeff Bezos, the Dalai Lama, and Toni Morrison. 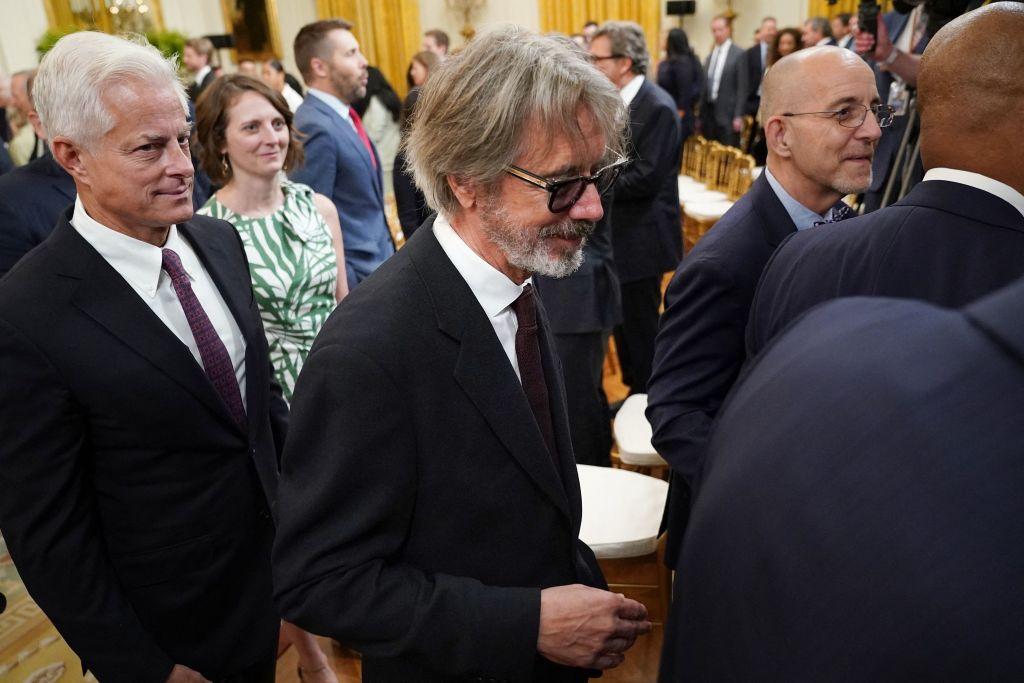 U.S. artist Robert McCurdy (C), who painted the official White House portrait of former US President Barack Obama, departs after attending the unveiling ceremony of the Obama’s portraits, in the East Room of the White House in Washington, DC, on September 7, 2022. (Photo by Mandel Ngan/AFP via Getty Images)

Sprung, also, has had a distinguished career. “I’ve always painted women,” she explained. “I intuitively understand women more, and [painting] is a way of expressing my own feelings through other women.” Earlier in her career, she painted hired models or people within her social orbit. But as Sprung’s career gained steam, her subject matter evolved into commissions for the likes of politicians Jeanne Rankin and Nancy Pelosi (both Democrats).

“As you age, you’re also less self-involved—your interest is in a wider world,” she continued. “I’ve become more interested in portraying women whom I respect, women of prominence, women of intelligence who make valuable changes to our world.”

McCurdy’s portrait of Barack gives him with a stoic demeanor. The painter has a detailed artistic process, starting with an involved photoshoot and ending with months of working on a canvas.

“There’s always something new. But since all of my paintings are quite similar, the process is more or less the same,” McCurdy explained.

He has a strict policy about not letting his sitters explicitly shape the final image. At the White House unveiling, Obama joked that McCurdy ignored his requests to omit gray hairs and reduce ear size, and even advised Obama to skip his tan suit.

We asked McCurdy if the joke was true. “He doesn’t need fashion advice from me!” the artist replied. 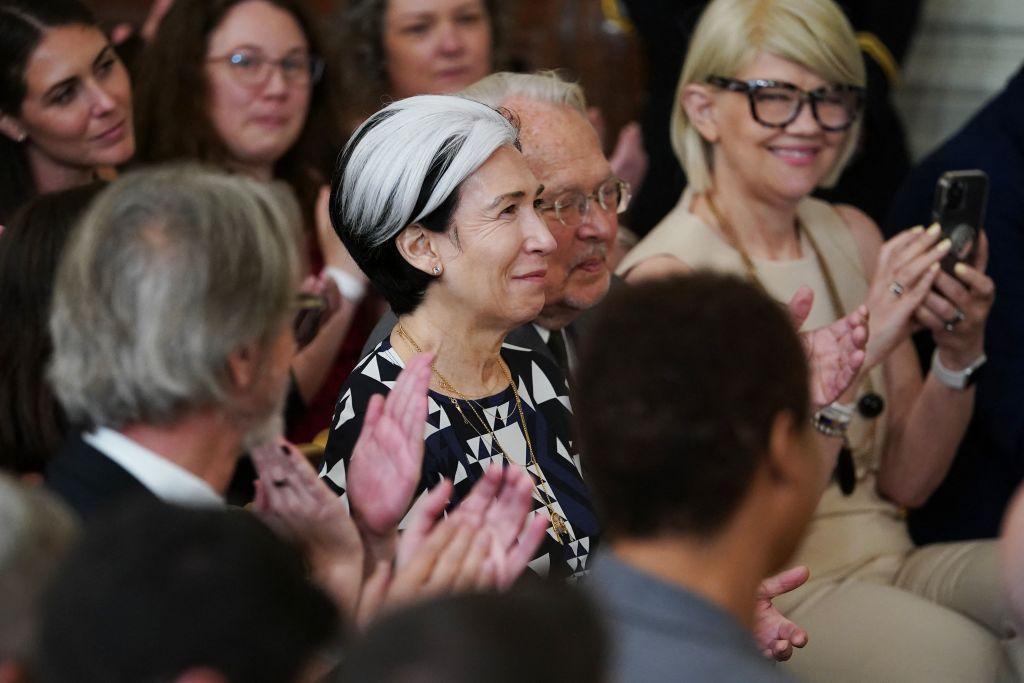 In Sprung’s painting of Michelle, the vivid colors are obvious—but pattern is a huge part of her thinking as well. “All of our world is patterns,” she said. “If you look at the animal kingdom, if you look at nature, we’re inundated with patterns. I think they reflect, unconsciously, a lot about how we feel.” While the patterned couch behind Michelle Obama draws attention, Sprung considers the pleats of the first lady’s blue dress her real tour de force.

In both images, the sitter’s gaze dominates. In McCurdy’s untitled work, the president smiles affably at the lens without a distracting background. In Sprung’s painting, Michelle Obama, well-known for her smile, looks to the camera with a look that is knowing, challenging, and amused all at once.

“It was a big choice asking her not to smile,” Sprung said—but a necessary one. “A portrait is a combination of hundreds and hundreds of expressions and minutes and changes. When you paint somebody with a full smile, it’s not reflective of a painting. It’s reflective of a photograph.”

Both artists took plenty of time to make sure they got it right. “The reason a painting takes so long, of this realistic level, is that you go over layers over layers to get the skin tones,” Sprung said. “Even though you’re emotionally involved with it, you have to have the distance to step back and see how it’s working together.”

Though in some ways, being commissioned for the White House portraits is one of the highest honors for a painter, and required extra time and research, in other ways, according to the artists, it was just another job. As McCurdy put it, “no one piece should impact a body of work more than another.”

Are charity art auctions, not donations, the new model for offsetting taxes?

The Back Room: Surreal Season