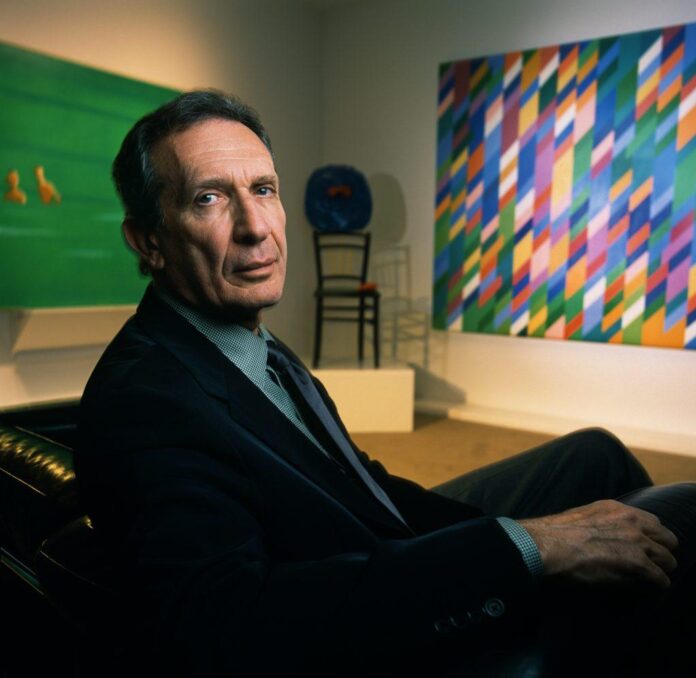 A New Story of Incarcerated Artists – The documentary , directed by Alysa Nahmias, follows the artist Jesse Krimes as he leaves prison and works to forge a career as an artist. He and other creatives he met serving time are now starting to gain traction in the art world. “Society can’t really visualize prisoners as even human beings,” artist Jared Owens said. “I’m going to bring your attention to that.” ()

Tracey Emin Plans Sale to Boost Artist Residency – The artist is putting , a painting she created upon recovering from bladder cancer, on the auction block to raise funds for TKE Studios, her new art school and arts center in Margate. The work, which will be sold Christie’s London next month, carries a high estimate of £700,000 ($774,382). ()

Arne Glimcher Goes Back to the Front Desk – The 84-year-old founder of Pace Gallery is expected to be spotted occasionally working the front desk at his new outpost Gallery 125 Newbury, which opens next week. It is technically under the Pace umbrella but will be operated separately by the legendary dealer and a small team. As it turns out, the idea for the project was born when Glimcher brought a proposal for a show to his son, Pace CEO Marc Glimcher, only to be told there wasn’t any room on the schedule. Glimcher has a 10-year lease on new space, which will feature around four to five shows a year. ()

Queen Elizabeth II Mural Painted Over in Australia – British artist Stuart Sale painted over a mural of the late Queen in Sydney’s Inner West with the colors of the Aboriginal flag. The image captured ongoing debates about the the legacy of British colonial history in Australia. ()

This Year’s Heinz Award Winners Announced – Artists Cauleen Smith and vanessa german are the recipients of one of the art world’s biggest prizes, an unrestricted $250,000 cash prize given annually by the Heinz Family Foundation. North Carolina-based german makes assemblages that address violence, racism, and healing; Smith is an experimental filmmaker who has expanded into painting and sculpture. ()

Ralph Lemon Wins Whitney Biennial Award – The choreographer and conceptual artist, who was awarded the MacArthur “Genius” award in 2020, is the recipient of the $100,000 Bucksbaum Award for his installation at the Whitney Biennial. Lemon contributed hundreds of small, colorful geometric abstractions made over the course of 25 years that he described as “mapping akin to an anthropological practice.” ()

A Former North Sea Gas Platform Is Now the U.K.’s Biggest Public Artwork – , a climate change-themed public art installation made from a decommissioned North Sea gas platform that weighs 496 tons, opens to visitors this weekend. The spectacle is part of the £120 million ($133 million) public event “Unboxed: Creativity in the U.K.” (also known as as “Festival of Brexit“). Located in the British seaside of Weston-super-Mare, the installation is 115 feet tall, with a 33-foot waterfall and a shimmering facade. ()

National Gallery of Canada reopens after tumultuous end to 2022

How To Integrate Art Into Your Wedding