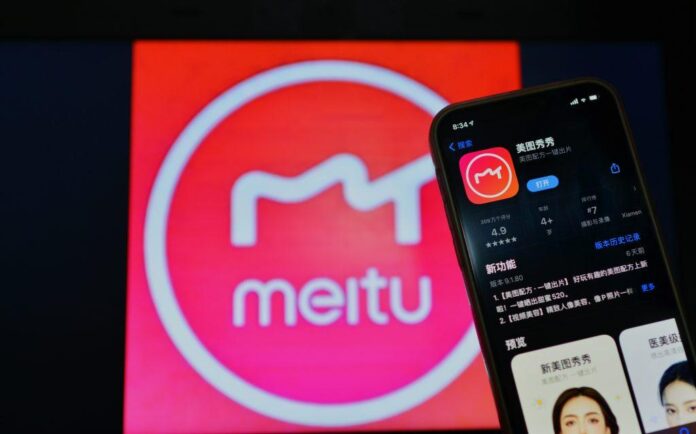 In China, the photo app Meitu is a go-to tool for retouching selfies. Its cutesy filters—think petals, pearly skin, and dramatic blush—have long been staples of social-media feeds in China. It’s only now, however, that the app is making an international impression.

The cause? Meitu’s A.I. anime filter, which has shot the Honk Kong-listed application up the Apple and Android app charts.

Meitu, which translates from Mandarin as “beautiful picture,” allows users to transform pictures they upload into anime-style images. The feature is the latest in a series that the Xiamen-based company has been releasing since 2018, when it created a real-time product called “Anime Avatar,” considered an industry first at the time.

So far in December, the app has been downloaded more than 6.5 million times, a six-fold increase from the previous month. In Japan, it has been a top-three photo app since November. Twitter and Instagram have been awash with images of Meitu users alongside their dreamy and artistically coiffed avatars. The company’s share price has duly jumped more than 60 percent since mid-November.

Meitu is the latest A.I. image generator to have achieved mainstream usage in 2022. The likes of DALL-E 2, Midjourney, Lensa AI, and Dream Studio (which runs on open sourced Stable Diffusion) have all carved out their own aesthetic niches and loyal followings. Their popularity has sparked concern among artists who claim the image generators exploit their work without credit or compensation. In the case of Meitu’s anime images, however, such pushback seems yet to have entered the discourse.

While much of the underlying technology used by these A.I. image generators isn’t new, the ease of use is, given that they require neither coding nor a high-powered computer. It’s a point succinctly captured by Meitu’s claim to generate “creative anime style photos with one tap.”

Though China’s digital ecosystem is largely self-contained, its size and the amount of data it generates—Meitu, for example, has 52 million daily active users on the Mainland — confers developers with advantages when it comes to iterating new features. Occasionally there are crossover successes, most notably TikTok, which is the international version of Bytedance’s Douyin.

China’s Cyberspace Administration recently laid out directives that will make the creation of A.I.-generated media without labels or watermarks illegal beginning in January 2023. It previously issued regulations that made deepfakes illegal in 2020.

Meitu did not respond to a request for comment.

Possibly the Oldest Known Pair of Levi’s Jeans, Salvaged From an 1857 Shipwreck, Fetched More Than Gold Nuggets at Auction

The Leaning Tower of Pisa Now Leans Less, Its Infamous Tilt Having Been Reduced by 1.6 Inches Over the Last Two Decades