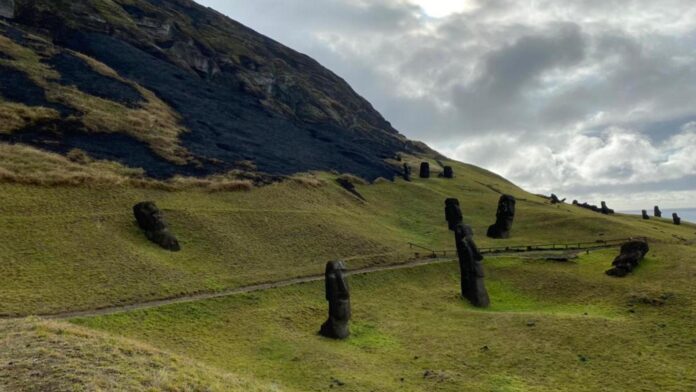 A potentially deliberate wildfire on Easter Island has wrought irreparable damage to the ancient moai head statues that dot the landscape of the Rapa Nui Natural Park, near the island’s Rano Raraku volcano, which is a designated Unesco World Heritage Site.

The statues, some of which are up to 4m in height, were created by the indigenous Polynesian tribe the Rapa Nui more than 500 years ago.

The fire started on 3 October near the Rano Raraku volcano, and may have been started deliberately, the island’s mayor, Pedro Edmunds Paoa, said in a broadcast on the island’s radio station, Radio Pauta. “The damage caused by the fire can’t be undone,” he said.

Ariki Tepano, who serves as the director of the indigenous Ma’u Henua community that manages the Rapa Nui National Park, described the damage as “irreparable” and warned that the “consequences go beyond what the eyes can see”, in a statement Thursday. Carolina Pérez Dattari, Chile’s cultural heritage undersecretary, also confirmed the news.

It is not yet known how many of the island’s almost 1,000 statues have been damaged by the fire, which has spread across 148 acres of the remote island. The area of the island in which the statues reside has been closed to the public while a conservation team assess the damage, the Rapa Nui council confirmed in a statement on social media.

The Rapa Nui carved the moai statues from basalt and tuff, a form of compressed volcanic ash, before positioning them to form a ring around the island, facing inland and looking over clan territory. Almost all moai have heads comprising three-eighths of the size of the whole statue; in Rapa Nui spiritualism, modern-day archaeologists believe, the moai are the “living faces” (aringa ora) of deified ancestors, an incarnation of their spirits. The largest weighs 74 tonnes and stands 10m tall.

A 2019 study published in the Journal of Archaeological Science concluded that the tribe who created the statues believed they improved soil fertility and thereby aided critical food supplies. Other recent peer-reviewed studies have suggested the statues were placed to denote and locate freshwater springs on the island.

Easter Island was inhabited by Polynesian groups for centuries before the nation state of Chile annexed it in 1888. The island lies 2,175 miles off of Chile’s coast in the Pacific. The island was first discovered by Europeans when the Dutch explorer Jacob Roggeveen arrived on its shores in 1722; the island is called Easter Island because he landed on its beaches on Easter Sunday.

Over the next century, many of the maoi statues were toppled from their original resting places. It is unknown whether this was a result of conflict with European pioneers or internecine wars among Indigenous groups.

Qatari sheikh’s rare ivory mask, stolen from Benin City by the British, is one of five on public display—none in Nigeria