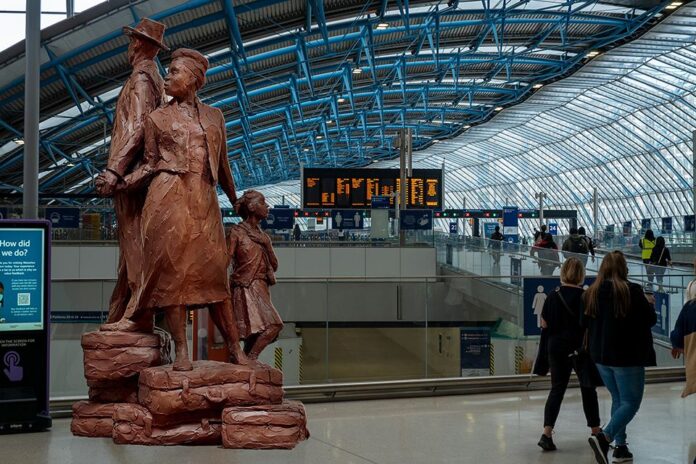 Two major public art works honouring the Windrush generation of workers who came to the UK from the Caribbean between 1948 and 1971 have been unveiled in London. The works—by Basil Watson and Thomas J Price—mark Windrush Day, the 74th anniversary of the arrival of the passenger ship HMT Empire Windrush at Tilbury Dock on 22 June 1948, bringing hundreds of passengers from the Caribbean seeking a new life in the UK.

Watson was commissioned to create the National Windrush Monument, which now stands at Waterloo Station. The monument was funded by the UK government Department for Levelling Up, Housing and Communities which provided £1m. “[The monument] will pay tribute to the dreams, ambition, courage and resilience of the Windrush pioneers who arrived in Britain after the Second World War and the generations that followed over the years,” a department statement says.

Watson’s work shows three smartly dressed figures—a man, woman and child—climbing a mountain of suitcases, hand-in-hand. The artist tells The Art Newspaper that the work takes on extra resonance in the wake of movements such as Black Lives Matter. “I think it speaks to an integration of cultures and races and so on… [it is about] respect for people’s culture, respect for people’s ambitions. It also reflects that we all, basically, have the same aspirations of progress for ourselves or families or communities. It speaks of all of that.”

Asked if the work chimes with the war in Ukraine, which has led to millions of people fleeing the country, Watson says: “I see the definite link and the repetition. The suitcases might change a bit, but the basic concept is the same. The suitcases, which are a key aspect of the concept and composition, came from an actual suitcase that was under my mother’s bed for years.”

The artist explains also how the creative process evolved. “One possibility was presenting a single figure that represented the achievements of the generation. But eventually, it came back around to the family and representing that aspect of it,” he says. But how will people react at Waterloo station? “The impact, the meaning and significance of it will slowly seep into the consciousness of the public,” Watson adds.

Watson has created several large-scale sculptures including Emotional Cliff (2013) along with representations of the Jamaican athlete Usain Bolt and the civil rights leader Martin Luther King. He was selected following a consultation process with the British-Caribbean community, managed by the contemporary public art organisation UP Projects. The process engaged with more than 250 international and British cultural leaders in the Caribbean community, who helped to develop a long list of artists. A public consultation was also undertaken.

The London-based sculptor Thomas J Price was on the shortlist for the Waterloo work. His work, Warm Shores, has been unveiled outside Hackney Town Hall; the piece represents a multi-generational cohort of Hackney Windrush residents and their descendants, say the project organisers.

Price’s work—and another Windrush piece by Veronica Ryan—were commissioned by Hackney Council in partnership with the arts organisation Create. The selection panel was chaired by Mark Sealy, the director of the Hackney-based gallery Autograph ABP.

The Eclectic Collection of the Late Joseph Hotung, a Member of One of Hong Kong’s Most Prominent Families, Could Fetch $100 Million at Sotheby’s