Home News With the threat of cuts, unions get militant in UK museums—and their... 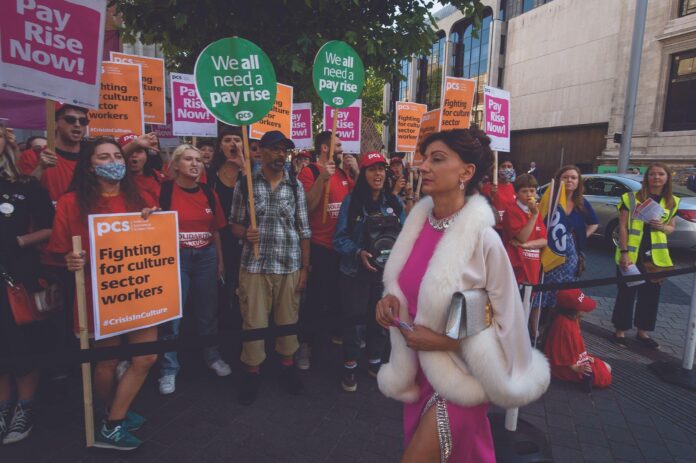 In autumn 2020, as Britain’s cultural institutions reeled under the pandemic, Claire Prendergast and Richie Metcalfe, both part-time, front-of-house workers at major UK museums, found themselves threatened with redundancy and having to go through reselection. Both were required to complete an application form that saw their answers scored by senior management. Prendergast found the experience “embarrassing” and hated having to compete with colleagues who were friends. Metcalfe, who is Black, said he found the process to be “discriminative”.

Both workers kept their jobs, an achievement they in part ascribe to membership of the PCS union. “In some ways, I’m a good communicator; in others, I struggle to articulate. The union helped me express myself clearly,” Prendergast says. Metcalfe says his union representative “raised red flags around discriminatory language” in the application process.

The pair are part of a growing body of British heritage workers to join a union. At the PCS Culture Group—which represents 4,000 members including front-of-house, catering, cleaning and security personnel—membership has increased by 20% between 2020 and 2022.

Membership has also climbed within Prospect’s heritage sector. With more than 10,000 members drawn from curatorial, conservation, archaeology and visitor services, the union has seen “two-thirds net growth” across its 30 branches, according to national secretary Ben Middleton. Membership has grown particularly at the Science Museum, the British Museum, the Victoria and Albert Museum (V&A), the Natural History Museum and the Archaeologists’ Branch, who act for employers at a number of companies.

Job losses incurred during the pandemic are a key factor in this surge. In March of this year, the Museums Association reported that Covid-19 had triggered over 4,800 redundancies. “The dismissals focused people on the worth of trade unions again,” says Steven Warwick, the secretary of the PCS Culture Group. “We now have a core of new members. They were good at their jobs. They had always done well. They didn’t think they needed a union. That has changed.”

That sense of security was entwined with the traditional view that working in culture is a privilege; heritage workers’ wages are, in the words of the Museums Association, “notoriously low”. A recent report by Prospect found that one in ten museum jobs paid £9.50 an hour or less. The median salary for an assistant curator is £20,395: £11,000 below the national median salary for 2021.

Today, fewer heritage workers are prepared to accept poverty just because they love their job. “My trust has been eroded,” says Gareth Spencer, who works as a duty manager at the Hayward Gallery in London’s Southbank Centre. In 2020, as PCS’s Southbank branch organiser, Spencer found himself in the thick of a fierce battle to save jobs and secure terms when the organisation announced a 50% cut to the workforce.

The government’s decision to “make an issue of contested heritage” has also boosted membership, says Middleton. He notes the threat from the Department for Digital, Culture, Media and Sport (DCMS) to withhold funding if museums removed objects that, arguably, glorified slavery and imperialism. “It’s triggered a surge in younger members who see their desire to properly present and curate collections linked to transparent threats to job security, funding and livelihoods,” he says. Indeed, Prospect has recently secured union recognition rights at the Museum of the Home, where museum director Sonia Solicari admitted to feeling pressured by the DCMS into retaining the statue of the slaver Robert Geffrye.

Union recognition brings many advantages. Before Covid-19, negotiators had achieved the London Living Wage—a voluntary payment of £11.95 an hour, over £2 an hour more than the National Living Wage—for virtually all workers in the capital’s museums and galleries. During the pandemic, unions negotiated better health-and-safety conditions for their members, including early closures, and achieved fewer job losses and better redundancy packages.

At the V&A, where around 100 redundancies were made, PCS negotiations achieved “a two-year re-engagement guarantees for staff, an enhanced redundancy package and an extended notice period, so staff received more money”, says Warwick. The union also managed to protect some jobs from proposed redundancies. The PCS’s presence at the V&A has, as a result, “significantly increased”.

The spectacle of sacked workers protesting vociferously outside institutions might suggest that museums and unions are constantly at odds. But Middleton attests to “very good relationships with the bulk of employers”. Solicari says she “welcomed” the union’s arrival at the Museum of the Home. “The conversations we have with Prospect are always really productive,” she says. “The Prospect representative is particularly impressive. I’d want them fighting for me.”

Unions acknowledge that cultural institutions are at the mercy of state funding. Between 2010 and 2014, DCMS funding for national museums was cut by 15% and has continued to dwindle. Meanwhile, local authority funding between 2010 and 2020 was reduced by 27%.

In June, Prospect sent a signal to MPs when it launched its fair pay report in Parliament Square. The report highlights the value of culture to the British economy; bringing in £14.7bn in gross value added (GVA), heritage is more valuable than either pharmaceuticals or the agricultural sector. If indirect impacts, such as regeneration, are added in, heritage’s total GVA rises to a staggering £36.6bn. “It doesn’t make sense that the sector is so poorly funded,” says Middleton.

The cost-of-living crisis has intensified the problem. At the launch, Prospect’s Tate representative spoke of the museum’s announcement of a 3% pay rise in a year when inflation has topped 10%: “For one colleague, that is an extra £62. But her rent has gone up by £100 and her bills by £150.”

Middleton says that the Tate has since agreed to a 4% to 5% pay rise. “But museums are constrained by pay remit limits, with only limited freedoms,” he says. “Any offers above 5% would require business-case approval from DCMS and Cabinet Office, with DCMS informing unions these could take a long time to be approved. That means museums are coerced into a position where they can only offer a maximum 5% pay rise. But staff are in need of greater help now.”

A major tension is the outsourcing of workers to private contractors, which Warwick describes as a way of “cutting costs and ripping up terms and conditions”. Gareth Spencer, meanwhile, calls the practice “a scourge on UK culture”. Often it is the lowest paid jobs—such as catering, retail, cleaners and security guards—that are outsourced. But in 2016, the V&A museum transferred all new staff, including curatorial, to their trading company, V&A Enterprises (VAE). VAE contracts, particularly with regard to pension schemes and sick pay, are “significantly worse”, according to Warwick, than for those staff still directly employed by the museum on civil service contracts. Warwick says the PCS signed the current recognition agreement with VAE as “a temporary measure” to ensure members would have representation during the [Covid-related] restructure”. Although the museum promised to renegotiate terms when it returned to business as usual, it is “refusing to re-engage on the issue”.

A V&A spokesperson describes VAE as a “longstanding and vital part” of the museum’s operations. All staff, “irrespective of which contract they are on”, are covered by “a single set of management practices, and procedures, common policies and a set of values and behaviours”. As for the failure to return to the recognition agreement, the spokesperson says the museum “regularly engages” with unions and “recognise[s] the value and importance of maintaining a constructive and flexible working relationship with open channels of communication”.

Unions would love to see museum directors fight harder for their staff. “The government is not faultless,” says Steven Warwick. “But we’ve said for a long time, you need to be more outspoken. The National Museum Directors Council could fight back more,” he continues, adding that he thinks museum leaders “fear retribution”.

One thing is certain: as budgets are trimmed to the bone, unions have a new role to play in the UK museum sector.

• To protect their identity, Claire Prendergast and Richie Metcalfe are assumed names