Home News Workers at the Philadelphia Museum of Art are on strike ‘until we... 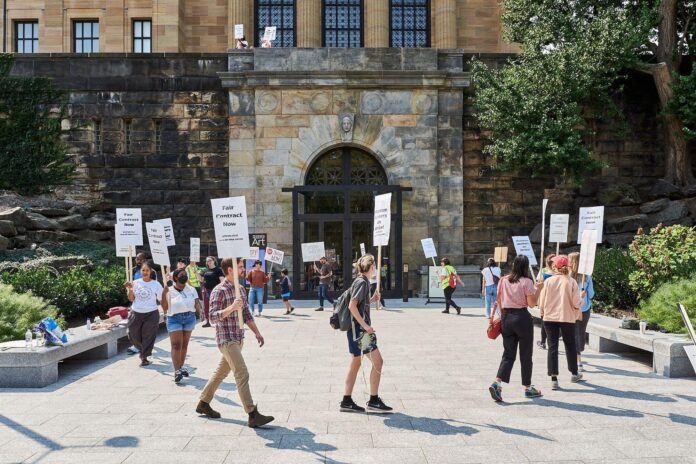 Unionised workers at the Philadelphia Museum of Art (PMA) began a strike against the museum today (26 September). This is the latest action that the museum’s union has launched since contract negotiations began in the fall of 2020. Over 100 members of the union, which includes people from across almost every department of the museum, formed the picket line. They were joined by representatives of other unions, local and officials.

The union is prepared to strike “until we get the contract we deserve”, says Adam Rizzo, president of Local 397, which represents the PMA workers, though he is hopeful that a contract agreement could be reached by the end of the week if the museum administration is willing to come back to the negotiating table. However, union members are “prepared to stay out longer if we need to”, Rizzo says.

The beginning of the strike coincides with the first day on the job for the museum’s new director and chief executive, Sasha Suda. “I’m really hopeful that [Sasha Suda’s] arrival will shift the culture of senior management around these negotiations,” Rizzo says. “But I think ultimately it really comes down to [board chair] Leslie Ann Miller and the board of trustees. Because my sense is that they’re the ones who are saying, ‘No, we can’t move on any of these issues.’”

The museum’s union, which is part of the American Federation of State, County and Municipal Employees (AFSCME), previously staged a one-day strike on 16 September. The latest bargaining sessions were held on 22 and 23 September. Following the Friday negotiation meeting, the union issued a press release announcing its planned strike and outlining some of the issues that remain unresolved in negotiations, including wages, healthcare and paternity leave.

Over the summer, the museum’s union began crowdfunding via social media for a strike fund in anticipation of negotiations reaching an impasse. The fund was started in the event that workers would forgo compensation in order to strike. The fund allows workers to still be paid and not lose wages as a result of the picket line, which will remain in place until a contract is reached.

“I was bargaining Thursday and Friday as a part of the table team. We put a lot of effort into putting forward sincere compromises, not all of which we were happy about. However, even then, the management team did not show any of the same interest in genuine compromise,” Nicole Cook, programme manager for graduate academic partnerships at the museum and a member of the union bargaining team, says. “They’ve released some misleading percentages around what their offers are right now. Their proposal amounts to roughly 11% wage increases spread over 3 years, amounting to a little over 3% per year, with zero movement on soaring healthcare costs. This is not enough for our members, who have been working without any increases for over 2 years, as inflation skyrockets.”

Despite the strike the museum remains open to the public. “The museum remains committed to reaching a collective bargaining agreement that is both fair to our staff and responsible to the long-term sustainability of this important Philadelphia institution,” a spokesperson for the museum said in a statement. “We have worked hard to do so, and we have reached tentative agreements on more than 25 substantive issues during the negotiations. We remain committed to the collective bargaining process and hope the union is open to finding a collaborative way forward.”

The strike also comes after the union filed an unfair labour practice charge with the National Labor Relations Board (NLRB) in August. In the complaint, the union alleged that museum administration has engaged in union-busting actions.

“We’ll be out here on the picket line until management sees what we all see, that workers are part of the PMA community and we’re trying to make things better for visitors and workers,” Cook says. “To fellow arts colleagues and any potential visitors of PMA: please don’t cross the picket line. You can’t stay neutral in a fight.”

On Monday, elected officials voiced their support for the striking union members, including John Fetterman, Pennsylvania’s lieutenant governor who is currently running for the US Senate, and state senator Senator Nikil Saval, who joined the picket line with his son.

Crisis, what crisis? Global import and export of art set to hit record levels by the end of 2022, according to Art Basel/UBS report

The landmark exhibition ‘Sensation’: who were the big buyers of Charles Saatchi’s art collection?