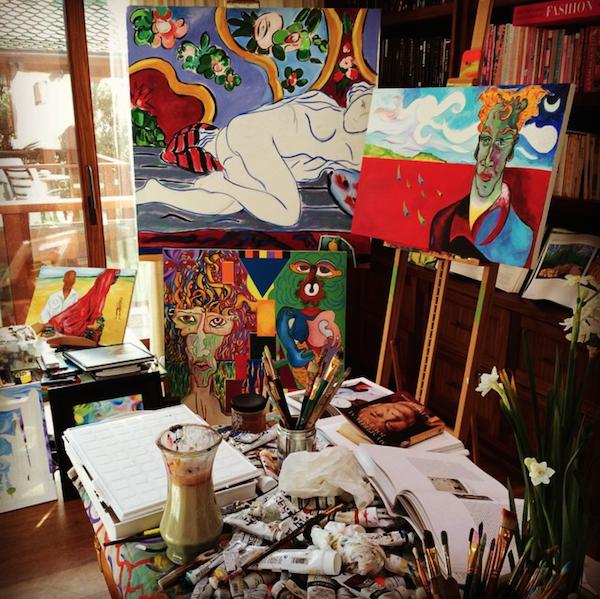 Actor and one-time James Bond star Pierce Brosnan has revealed to the world, via Instagram, an intensely personal painting he made in 1987 relating to his late wife’s cancer d of his wife, Australian actor Cassandra Harris, to whom he was married from 1980 to 1991.

The actor has said that he started painting while Harris was undergoing treatment for ovarian cancer.

“Carrying the weight and pain and the fear of that illness, I took out the paints,” Brosnan told GQ. “And started painting. With my fingers. With my hands, actually.”

The painting, which includes “repetitions of symbols, self-portraits. Emblems of some Celtic past,” the actor said, will be part of an upcoming show at the gallery Seasons L.A.

“That’s how we start [the exhibition] – heavy. But beautiful, beautiful,” the Thomas Crown Affair star said.

Brosnan makes colorful, Pop-like paintings that playfully integrate symbols with figures in a variety of poses.

Brosnan apparently took up painting again alongside his 21-year-old son, Paris, whose mother is the actor’s current wife, Keely Shaye Smith. “He just devours these canvases,” Brosnan told . “It just fills me with the greatest pride, fatherly pride, to be painting alongside him, just to be quiet in the garage or wherever we’ve painted. It’s a really beautiful experience.”

Paris, too, had kind words to say about his father: “He’s, like, evolving into a legit artist and taking it to the top.”

Seasons L.A., where Brosnan’s show is set to open next spring, is part of the Art Room development in L.A., a multi-use site that is also home to an all-day cafe, office spaces, in addition to the 1,000 square-foot gallery.

The gallery recently included several of the actor’s works at the inaugural edition of Contemporary Art Now, an art fair in Ibiza. In December, it showed works by Brosnan and his son Paris in a curated sale put together by NFL star Odell Beckham, Jr.

Brosnan is the latest in a series of A-list actors who have turned to the canvas, including Brad Pitt, whose previously unseen sculptures recently went on view at a museum in Finland.