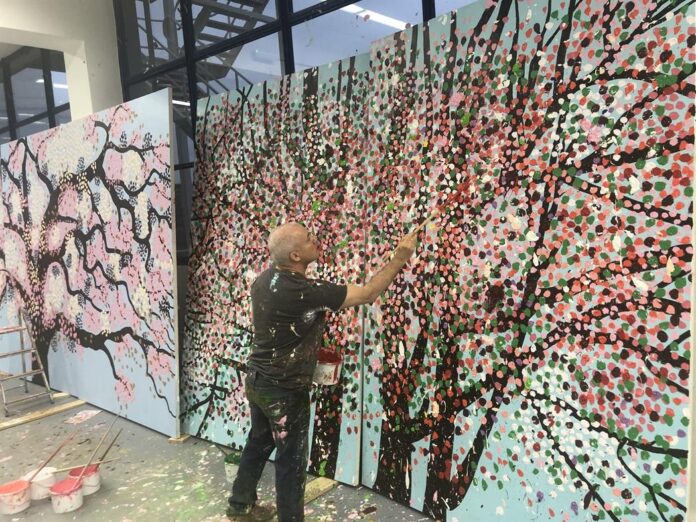 A new digital marketplace called Palm has debuted. It happened because there were claims that the sale of NFTs consumes too much power.

Its goal is to make the new digital market more environmentally efficient. To launch the platform, Palm brought artist Damien Hirst on top.

His work for Palm will be “Currency Project”. The Currency Project, created in five years, consists of 10,000 oil paintings on paper, each accompanied by its own NFT, or non-fungible token, a digital file that is authenticated by the blockchain.

The series explores the fusion of art and wealth. This is a fitting theme for the artist who is known for his diamond-encrusted skulls that have broken records at auction. The pricing model has not been disclosed yet.

Damien Hirst said Palm is by far the best platform for him. Since it is art-oriented, it is the most environmentally friendly, faster, and cheaper to use. With Palm, artists can reinvent the future. Created by Joe Hage, owner of Heni Publishing, and David Heyman, founder of Heyday Films, NTF platform Palm claims to be 99 percent more energy efficient than Ethereum. Meanwhile, Ethereum is also in the process of moving towards a greener model.

This isn’t Damien Hirst’s first foray into blockchain. Earlier, he unveiled a series of eight prints titled Virtues, which can be purchased with cryptocurrency from Heni Leviathan, an online contemporary art marketplace.

The artworks, each depicting cherry blossoms, priced at $ 3,000, were only put up for sale for one week. Damien Hirst was one of the few well-known artists whose sales are usually done by blue-chip galleries or auction houses that have adopted cryptocurrency.

The NFT mania began in March this year when Mike Winkelmann, an artist working under the pseudonym Beeple, proposed the digital collage Everyday: The First 5000 Days at Christie’s. Bidding started at $ 100 and exceeded $ 69 million. In the past, galleries have struggled to sell art only online, but the sale of Beeple provided a blueprint for future ventures.

NTF platform Palm is joining other relatively new online platforms such as Nifty Gateway (another Ethereum-based site), SuperRare, and the Foundation, which provide artists with a unique signature that represents their artwork.

The total environmental cost of NFT is still being determined, although current data indicate that the sale of these works could have a negative impact on the environment. According to research by artist and computer scientist Memo Akten, a single NFT dropped onto a platform such as SuperRare produced about 211 kg of CO₂. 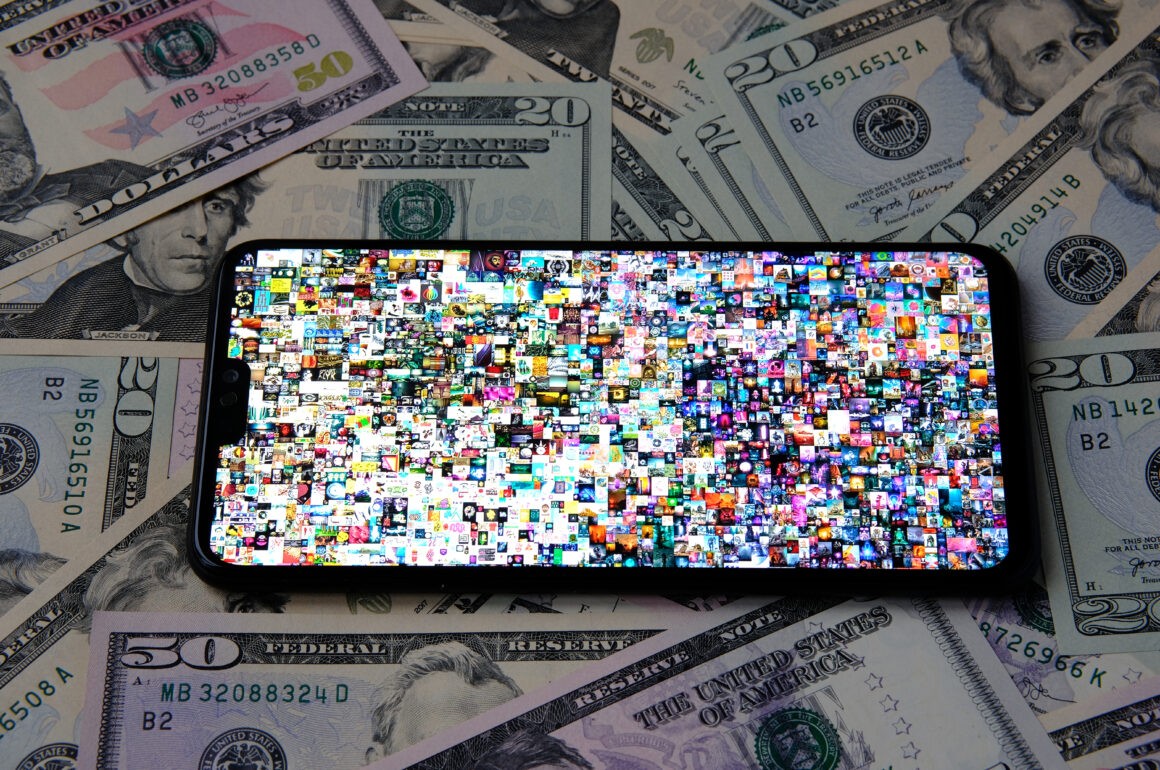 ConsenSys, HENI Group, and Heyday Films unveiled the Palm NFT platform, an innovation lab created to collaborate with artists, marketplaces, and copyright holders to bring projects and platforms to the Palm ecosystem.

Damien Hirst said that ever since he made the diamond skull, he has been thinking about wealth and value. For the last five years, Hirst has been working on a secret art project. According to the artist, the project is aimed to challenge the notions of value and money.

Over the past three years, the project has expanded to blockchain and NFT. Damien Hirst is working closely on this project with HENI, which in turn is partnering with a leading technology company in the crypto world.

These are 10,000 original works of art on paper, which Hirst calls “Currency”. The artist made them all five years ago and they are in storage but are about to come to life thanks to their blockchain launch.

They also exist as NFTs and related cryptocurrencies. The entire project is a work of art, and anyone who buys Valyuta will participate in this work, not just owning it. According to Damien Hirst, this is the most exciting project he has ever worked on. 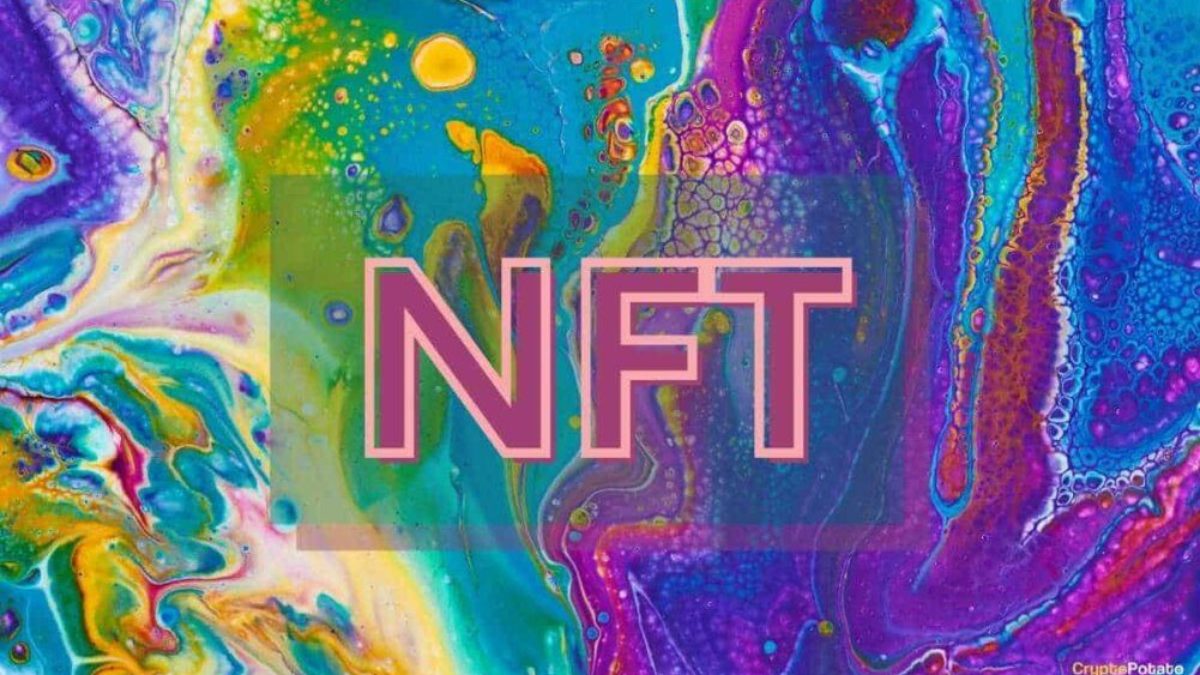 Besides Damien Hirst’s first project, Palm is also announcing several launches of partners from the crypto space today that will support the Currency project and other future releases on Palm: the Defi Uniswap trading protocol, which will deploy Uniswap v3. a protocol to support the trading of artistic assets in the Palm ecosystem; $ MEME, a popular NFT experimental project; Nifty’s, a new social media platform focused on NFT; and Protocol Labs for decentralized storage of NFT metadata in IPFS.

The Palm sidechain will be available via a configurable web on MetaMask. This is the most popular Ethereum wallet in the NFT space.

In recent months, NFTs have grown in popularity with artists and creators because of their transformative role in property, trade, and the way creators connect directly with buyers, fans, and collectors. The Palm ecosystem is designed to provide artists and creators with an optimized work experience today, including low gas costs, fast transaction completion, and 99% energy efficiency.

How NFT platforms are changing the digital art market 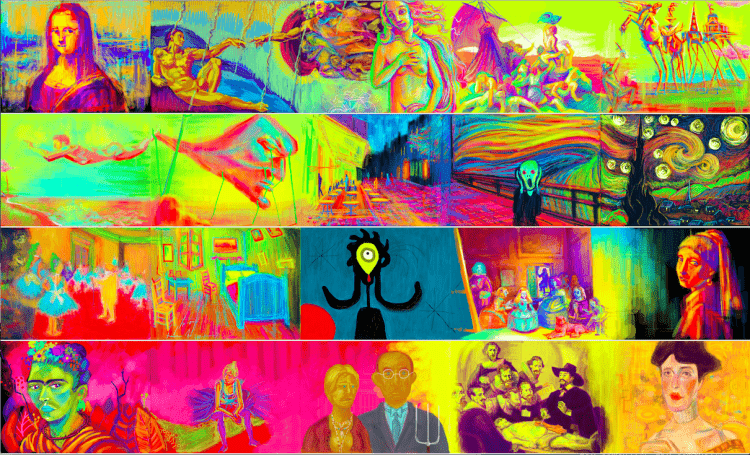 According to experts, 30% of the NFT market is now occupied by digital art. The latest big news was the sale of The First 5000 Days by American digital artist Beeple. The deal amounted to $ 69 million. The auction was arranged by the famous auction house Christie’s, which is an event by default.

Until last year, everyone knew Beeple as a designer, but suddenly he became a great artist. The role of Christie’s is insanely important, the auction linked the crypto world with the traditional offline space.

By the way, a Singaporean crypto-entrepreneur Metakovan became the buyer of Bipla. And it was a big gesture from the crypto community to wipe its nose with the conservative art community.

In recent years, digital art has been developing more and more actively. In particular, this can be seen in the 2019 Venice Biennale, where about half of the works were presented in multimedia formats.

For trading floors, this way of presenting art objects for a long time has remained inconvenient, and even now you can count the real stars on one hand.

Except for Bill Viola and 5-6 other names, no one will name any major digital artists. It was not profitable for galleries and auctions to sell digital works. The question arose – who actually owns the digital original? But the NFT mechanism solved this problem and gave impetus to a new business.

The average cost of an artist’s work on the NFT market is now 1.5 ether (the cryptocurrency of the Ethereum blockchain), which at the current exchange rate is $ 3000.

The NFT art market began to take shape not so long ago but has already undergone some changes. At least the content has gotten much better.

First on our list of awesome NFT illustrations is Quantum – the first NFT created back in 2014. Quantum is in some way the oldest record, and it was collected when Anil Dash and Kevin McCoy created the first blockchain-enabled system for sale NFT. 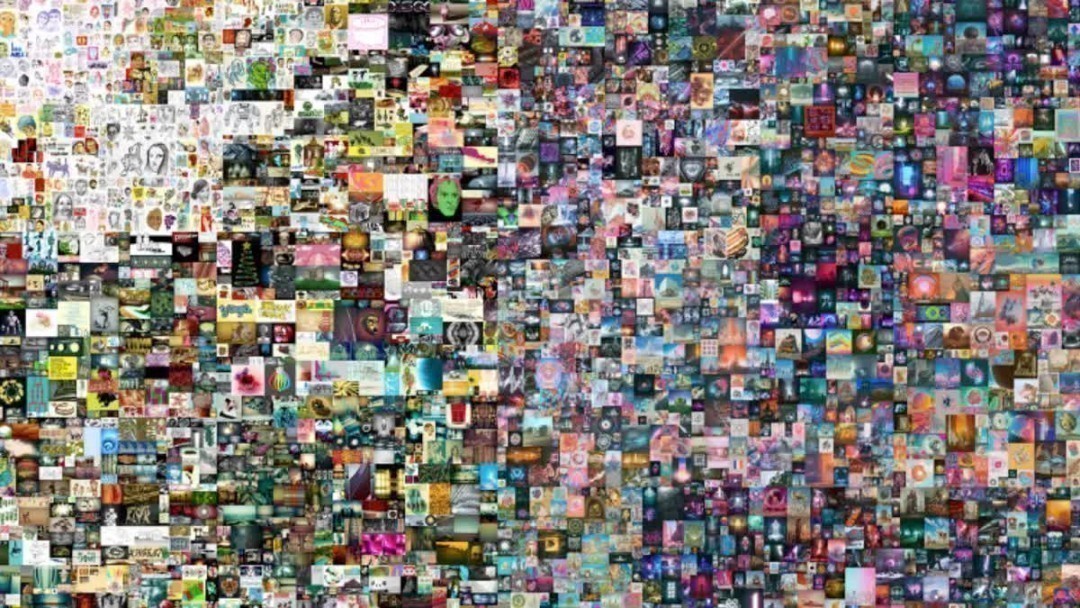 Beeple, aka Mike Winkelmann, sold his work Daily – The First 5000 Days in March 2021. It went for an impressive $ 69.3 million, the highest price paid for an NFT to date. 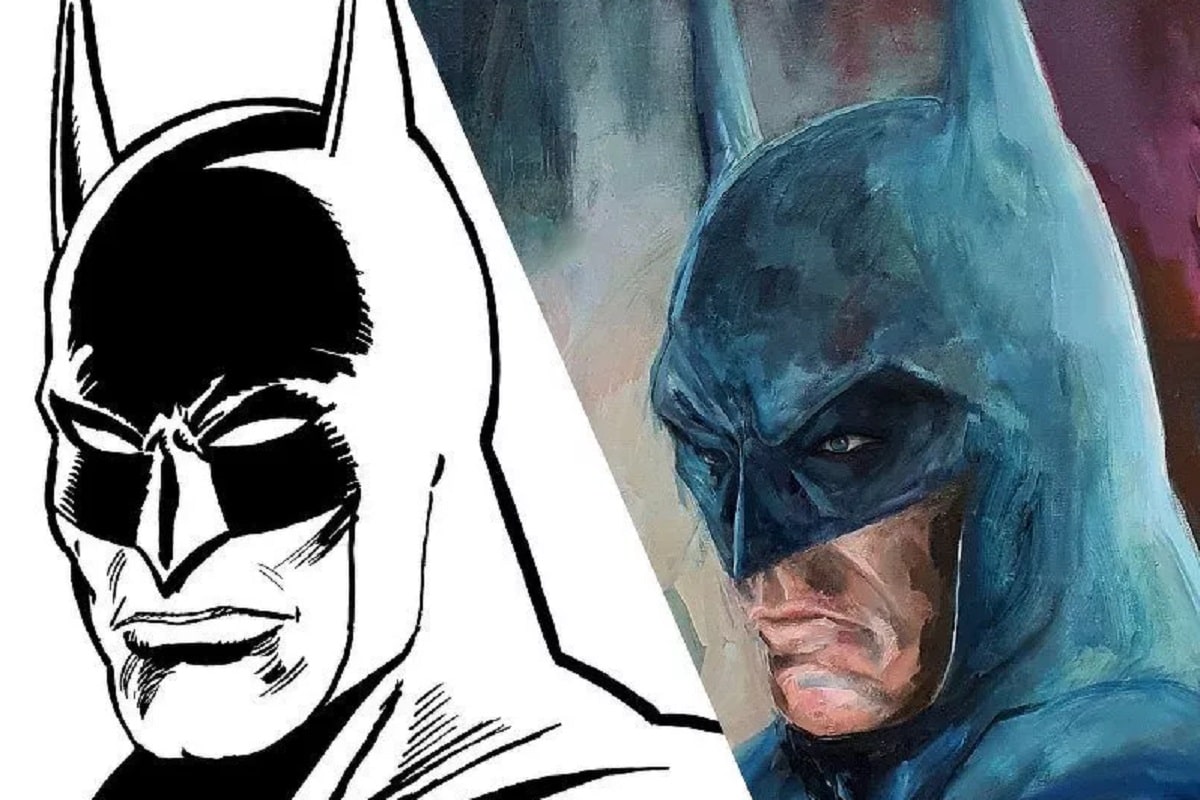 This ominous depiction of Batman is from a five-part collection called Genesis, which sold out in 2020. A stunning pencil and ink sketch that has been interpreted in oil on canvas to create a duo, this entry on our NFT art list is a collaboration between comic artist Jose Delbo.

As the name suggests, this is a hand-drawn Gucci ghost that wasn’t even created by Gucci, but by multidisciplinary artist Trevor Andrew. 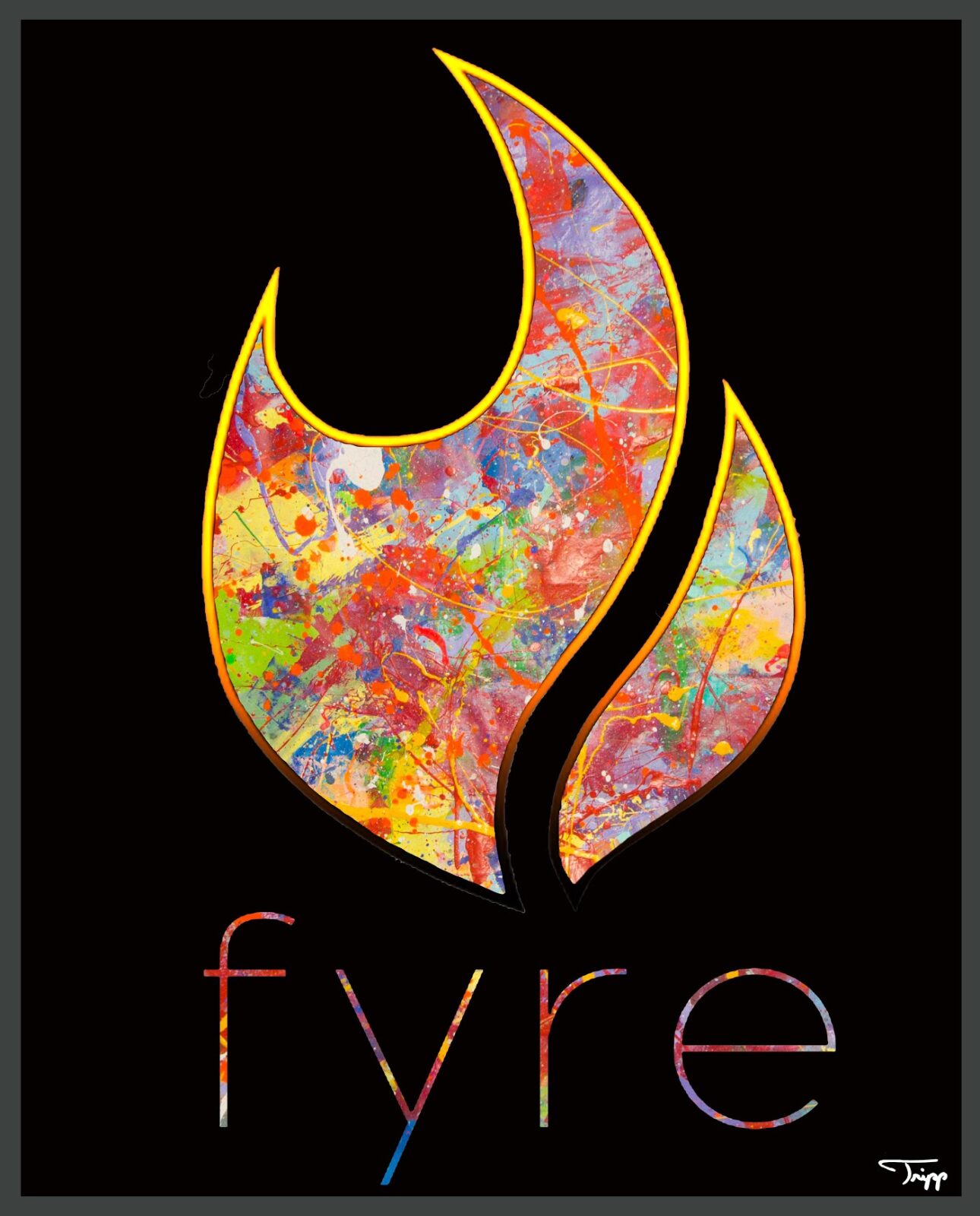 The $ 122,000 price tag, one of the most controversial in the history of NFT art sales, indicates that the symbol has become an important part of cultural history.