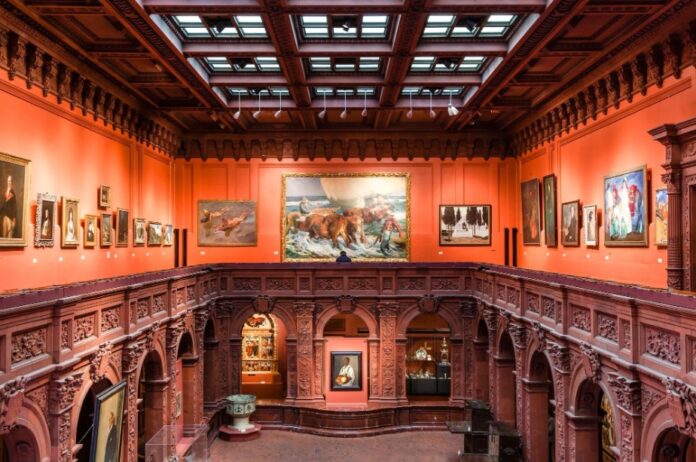 Hispanic Society Museum & Library (HSM&L) in New York City started out in 1904 as a research library and rare book collection before curating one of America’s finest caches of Spanish Old Masters. Its mature mission eventually expanded to the entire Spanish- and Portuguese-speaking world, and now the HSM&L is announcing a series of ten new acquisitions stretching from 16th-century Portugal to 20th-century Mexico.

In recent months, collectors have donated Portrait of Angel Cansino (1933) by the Spanish painter José María López Mezquita, as well as a few portraits of a Mexican couple (1847-48) by Pelegrín Clavé y Roqué, a Spanish painter active in Mexico. All three works were donated by the sitters’ families, says HSM&L director and chief executive Guillaume Kientz, which include a French-based descendant of Cansino, a celebrated dancer — and, coincidentally, the uncle of Hollywood legend Rita Hayworth.

Kientz says the bequests coincided with a number of purchases, including a Mexican secretary (1650-1700), made of mixed wood and wrought iron, bought from London-based collectors, and an allegorical portrait of Francisco Goya painted in 1860, about three decades after the Death of the Spaniard, by another Romantic painter, Eugenio Lucas Velázquez (1817-1870), who has a number of works in the Prado Museum in Madrid. The HSM&L bought the painting for an undisclosed price from the Nicolás Cortés Gallery in Madrid. To enrich the collection of rare books and manuscripts, the HSM&L also purchased an early 17th-century patent with an unusual decorative band for an undisclosed price.

Kientz says the HSM&L has been particularly excited to expand its Portuguese holdings, and this new round of acquisitions includes a rare announcement in ink on paper by Fernaõ Gomes, a Portuguese artist of Spanish descent who created the only known portrait of the national poet of Portugal, Luis de Camoes.

The licorice secretary may need some conservation, Kientz says, but 20 charcoal drawings by Mexican muralist José Clemente Orozco are set for display in early 2023, when the HSM&L will put on a show about the artist.

The set of drawings, donated by California collectors Michael and Salma Wornick, includes studies for Orozco’s mural man on fire (1939) in Guadalajara, Mexico. An important work by Orozco, the huge fresco fills the neoclassical dome of the main chapel of the city’s Hospicio Cabañas complex. In addition to Wornick’s new bequest, the upcoming show will feature works tracing Orozco’s influence on other artists.