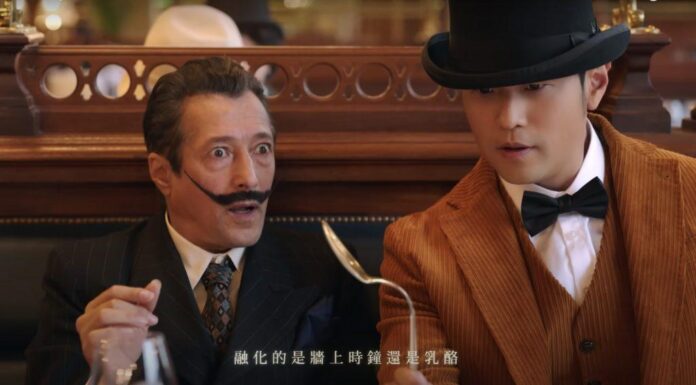 It may be every art lover’s dream to spend time with their favorite artists, especially those who are no longer alive. In his new viral music video for the song “Greatest Works of Art”, Taiwanese mega pop star and art collector Jay Chou has made the impossible almost possible, spending time with some of the most famous artists in history—thanks to a touch of special effects magic.

Chou directed and stars in the music video, which was released on July 6 and racked up nearly 10 million views on YouTube in just two days. In the piece, Chou disguises himself as a security guard at the Samaritaine department store in Paris, to sneak himself into the historic building in order to play what appears to be a magic piano.

The music kicks off a time travel journey, transporting Chou and his partner to 1920s Paris, where he encounters artists including Salvador Dalí (one of his mother’s favorites), René Magritte, Claude Monet, and Chinese-French painter Sanyu. He also meets Chinese poet Xu Zhimo, and engages in a piano battle with a mysterious musician played by Chinese piano superstar Lang Lang.

Chou also performs magic in front of all the artists, while singing how, in his imagination, these artists’s most iconic works were inspired by his tricks. For instance, the melting clocks in Dali’s (1931) were inspired by Chou’s spoon bending magic, while the hovering green apple that obstructs a person’s face in Magritte’s (1964) was based on another illusion.

Besides singing about these blue chip masters, Chou has included a few verses about himself. “In this wild era, as the king of music, I think I do not need a picture frame,” he said. “My musical notes are all the future of art.”

The R’n’B number is the first single from Chou’s 15th solo album (and his first musical offering in six years), which is set to be released on July 15. While the elaborate music video and the long awaited song from the star has been a hot topic of discussion among the Chinese-speaking community around the world, not everyone has fully embraced the title. One Twitter user wrote: “Greatest works of art are all foreigners? It’s painful to see such name-dropping at a high school level.”

Chou, 43, has recently become one of the biggest young collectors from Asia. He often posts pictures of works of art he has purchased or is interested in on his social media platforms. Last year, he acted as a curator of Sotheby’s Hong Kong’s “Contemporary Curated: Asia” sale, which was orchestrated by the auction house’s former Asia head of contemporary Yuki Terase. (She has since embarked on a new career, partnering with Amy Cappellazzo, another former star executive at Sotheby’s, to form the art advisory firm Art Intelligence Global.) The auction was a white glove sale, totaling $109 million and setting nine artist records.