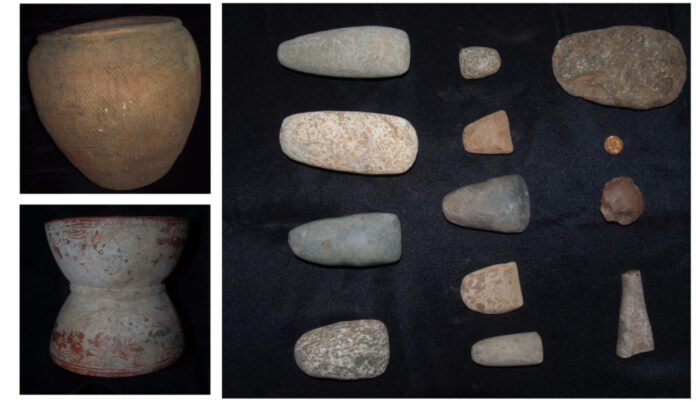 On Monday, officials in the United States returned 921 stolen artifacts to the West African country of Mali.

Per a statement, the cache of presumably looted goods first roused suspicion in March 2009, when authorities intercepted an illegal shipment at the Port of Houston on Texas’ Gulf Coast. Listed as replicas, the artifacts initially appeared to be authentic ceremonial and mortuary objects, writes Zachary Small for the New York Times.

Among the artifacts returned were 913 ground and flax stones and ax heads dated to the Neolithic period. The trove also included six large funerary urns dated to between 900 and 1700 C.E.; a high-necked polychrome pot dated to between 1100 and 1400 C.E.; and a red slip double cup vessel marked with the impressions of a comb and dated to between 800 and 1500 C.E.

“No one has the right to loot or destroy … heritage and history,” says HSI special agent Mark Dawson in the statement. He adds that the government agency will continue to “aggressively target anyone who pilfers the priceless cultural treasures of a nation and work tirelessly to return them to their people for future generations to enjoy.”

U.S. authorities first returned a handful of the stolen objects to Mali in 2011 and 2012, reports Alex Greenberger for ARTNews. The two countries share a long-standing legal agreement regarding the protection of Mali’s cultural property.

Ratified in 2007, the agreement aims to prevent illegal trafficking of items from Mali’s culturally rich but vulnerable regions. These areas include the Cliff of Bandiagara (also known as the Land of the Dogons), an ethnically diverse locale with striking plateaus and cliffside towns; the city of Djenné, a former hub of Islamic scholarship renowned for its earthen Sudanese architecture and grand mosque; and the historic city of Timbuktu, the onetime home of the famously wealthy medieval emperor Mūsā I of Mali, also known as Mansa Musa.

European powers such as France and Britain colonized most of West Africa in the late 1800s, looting many of the region’s culturally significant sites. More recently, powerful militias and terrorist organizations in Mali, which achieved independence from France in 1960, have wreaked havoc on the country’s cultural heritage. The violence has threatened irreplaceable artifacts, including fragile medieval Arabic manuscripts, as Joshua Hammer reported for Smithsonian magazine in 2014.

In 2012, a civil war broke out in Mali, delaying the return of the remaining 900 or so items, say U.S. officials in the statement. Ongoing instability—most recently, a May military coup that ousted Mali’s civilian leaders—has also hampered authorities’ ability to regulate the smuggling of cultural heritage items.

Last June, the State Department issued a grant to Mali that financed the repatriation of the 900 objects and their eventual exhibition in the country. Mohamed Traore, an adviser with the permanent mission of Mali to the United Nations, tells the Times that repatriation negotiations officially resumed this year.

The artifacts will eventually go on display in Mali’s museums, including the National Museum of Mali in the capital of Bamako, notes Traore.

“We put a great deal of care into culture,” he says. “We considered these objects as part of our history that was not present anymore.”

The Home of Ronald Lauder, Along With Its Vast Private Art Holdings, Has Been Faithfully Reproduced Inside the Neue Galerie