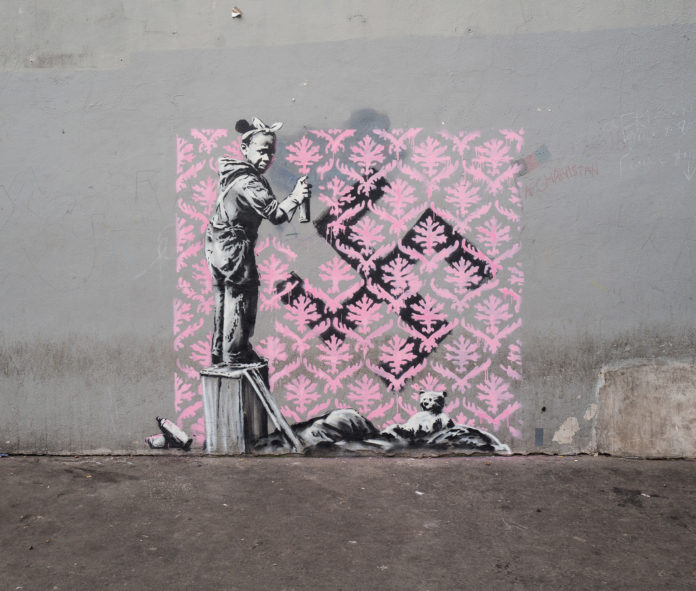 Against the backdrop of Paris Fashion Week which introduced several collaborative projects between high fashion brands and big names from the art world (Dior partnered with KAWS and Takashi Murakami continued collaborating with Virgil Abloh, the new artistic director of Louis Vuitton’s menswear collection), the French capital was hit for the first time hit by the world’s most elusive street artist—Banksy.

Without previous announcement or warning, Parisians began to discover several new street pieces that quickly materialized in the urban/street art galaxy of the social media universe and were eventually confirmed on Banksy’s official Instagram account.

The first piece was found near the Porte de la Chapelle metro station, where Paris’ refugee centre “La Bulle,” was located until August 2017. A city within a city, it was home to a makeshift camp of some 2,700 refugees and was dismantled an estimated 35 times before 2,000 migrants were bussed to temporary shelters. This was done as part of Emmanuel Macron’s wish to remove the refugees “off the streets, out of the woods,” as stated during his campaign.

With this in mind, Banksy revisited his “Go Flock Yourself” piece from 2008, and created a new version as commentary on the current political situation in France and throughout Europe. Depicting a black girl painting a Victorian wallpaper pattern over a swastika, the artist is commenting on the way politicians are concealing wrongdoing and potentially fascist policies.

The second and third pieces appeared soon thereafter. One depicts a suited man luring a three-legged dog with a bone while hiding a saw behind his back, a metaphor for politicians tricking people with promises that often have a masked, devastating agenda. The other is Banksy’s take on the iconic painting “Napoleon Crossing the Alps” by Jacques-Louis David, a symbol of French power and influence. By covering the rider with his own cape, the artist is commenting on the current misguided way the government is leading the country, blinding people with propaganda and false promises.

The last three pieces introduce Bansky’s signature rats to their genesis—Parisian artist Blek Le Rat and his rat stencils were a great influence on the Bristol-born artist, or as he stated in one of his recent IG posts: “The birthplace of modern stencil art.” Placing them around the city in ways that interact with local graffiti and building facades, it may appear as though they’re having fun blowing things up. But in reality, they are a reminder of a volatile period of civil unrest that took place in May 1968 when the government temporarily ceased to function.

In one piece a rat is propelled by a popping champagne cork. Using this symbol of affluence as their vehicle to overtake obstacles, the rodents are once again Banksy’s metaphor for working class people making significant change when they join together and fight for similar cause.

Of particular note in this Banksy “invasion” was that some of the works were miraculously revised overnight, allowing the artist to highlight one of the biggest advantages of stencil technique–its ability to be applied quickly and precisely. With this in mind, a small rat prepared to blow up a Pompidou Center sign suddenly morphed into a much larger rat with bandanna covered face. It now wields a large X-Acto knife, a common symbol of stencil cutting.

Included here are many of the works that have since emerged in Paris, but you can see several more here. 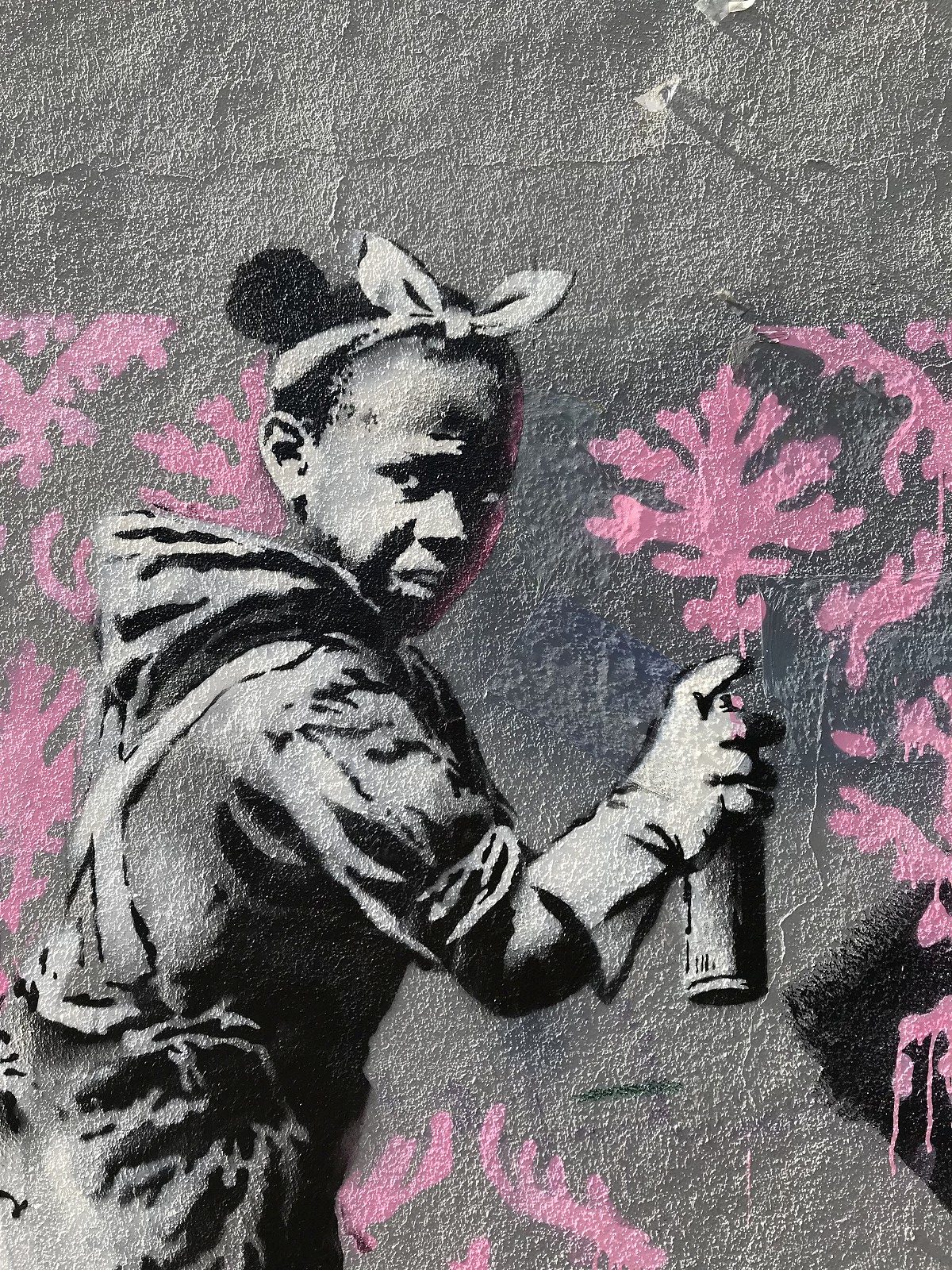 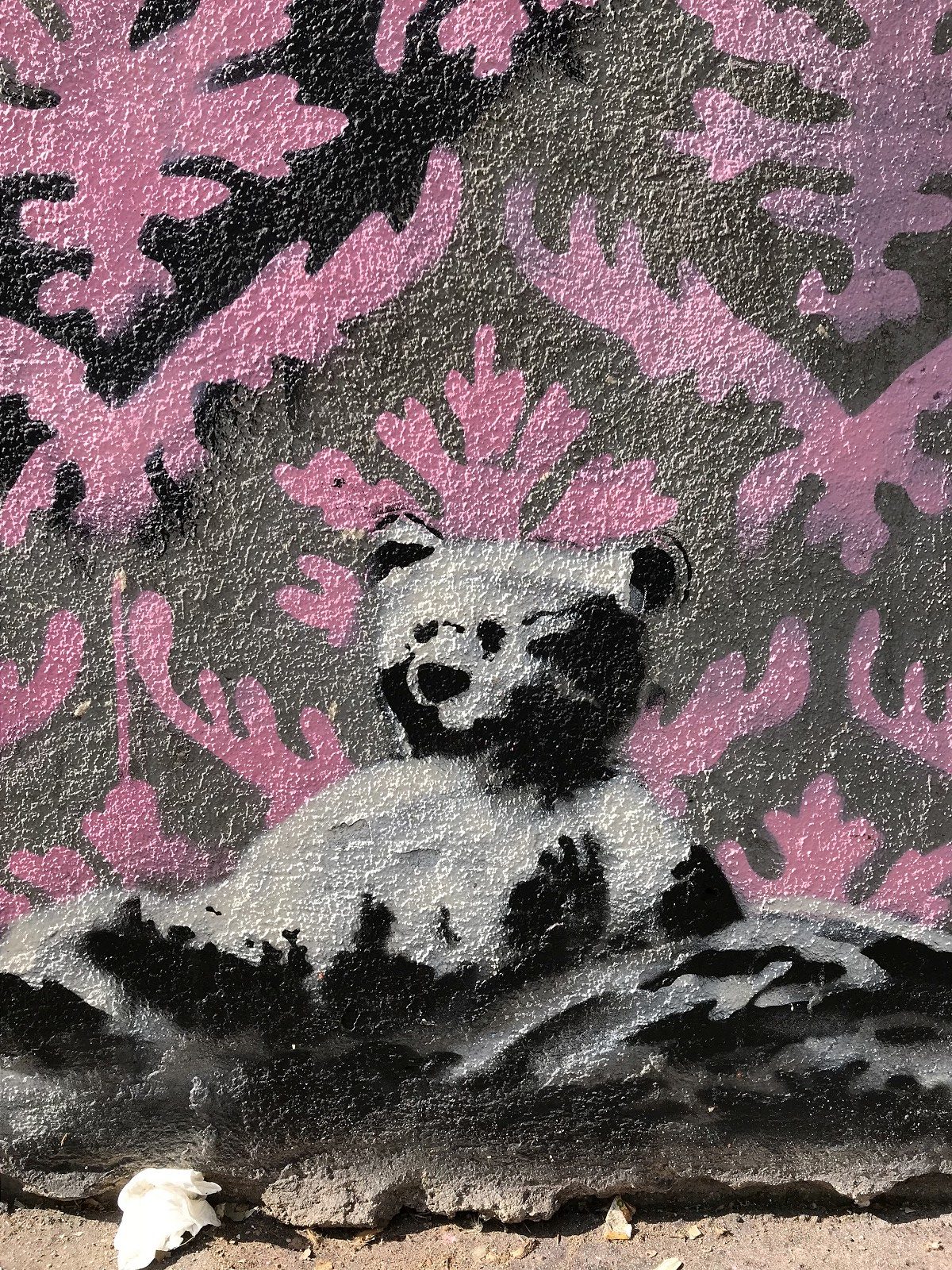 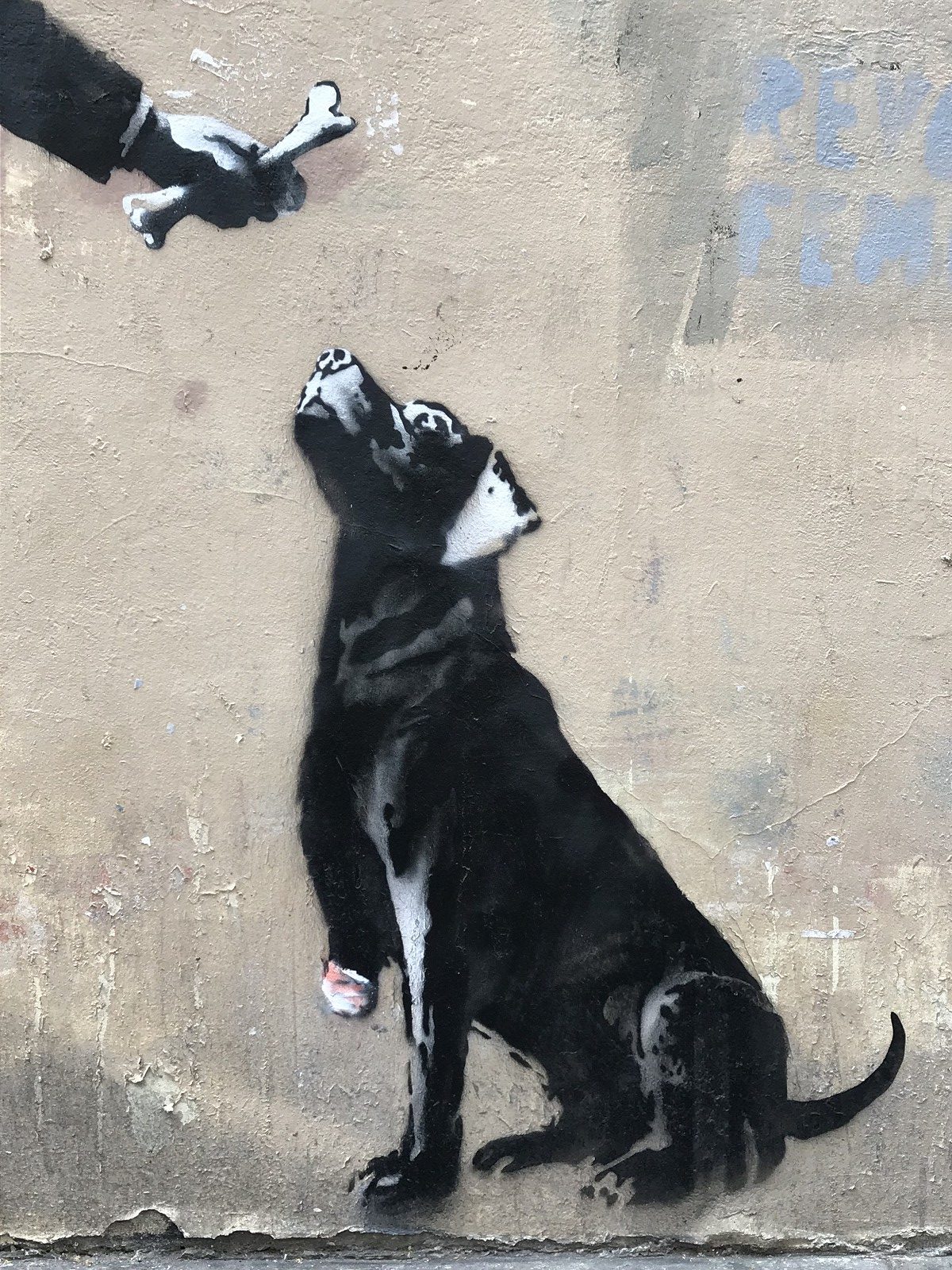 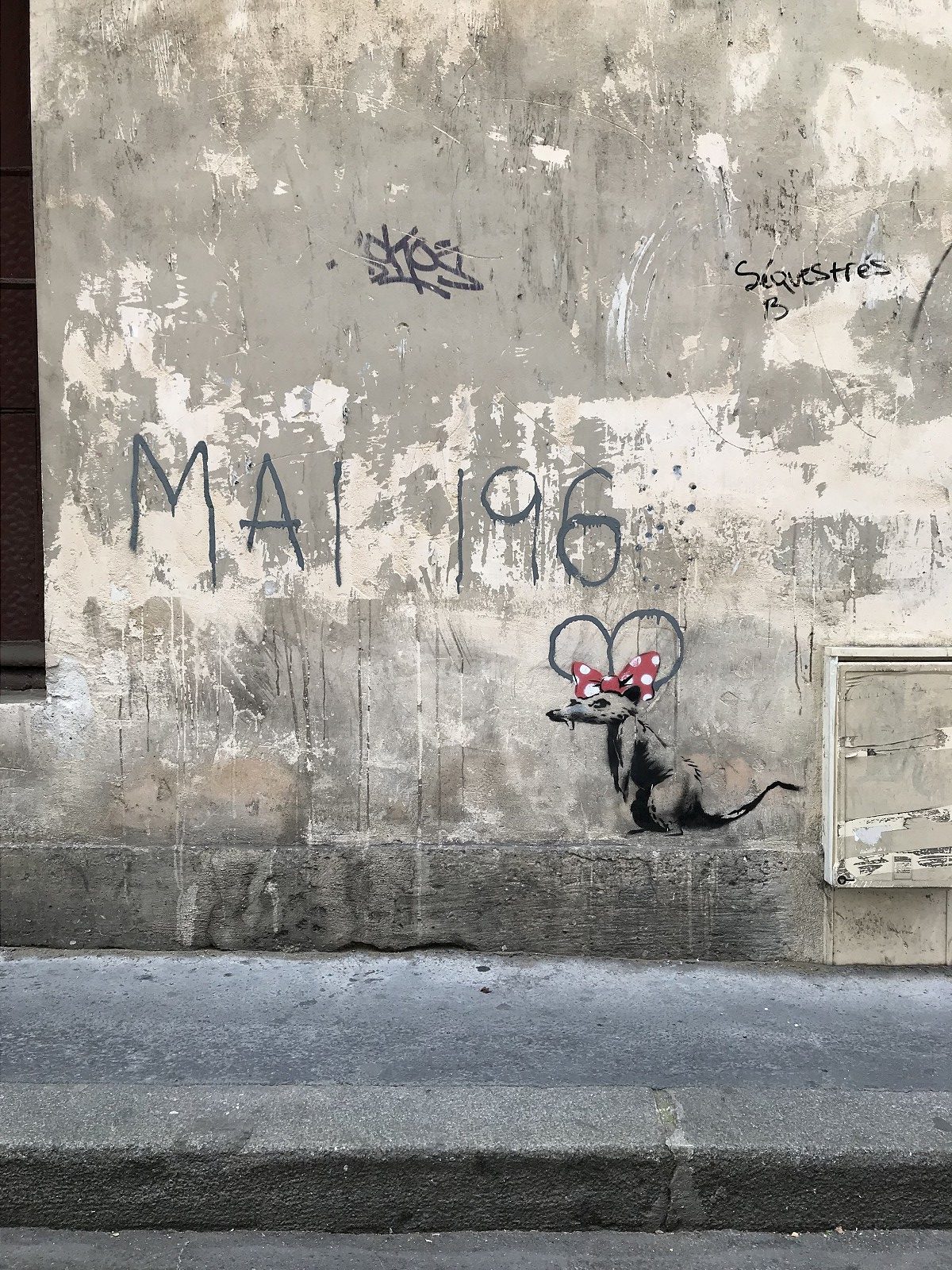 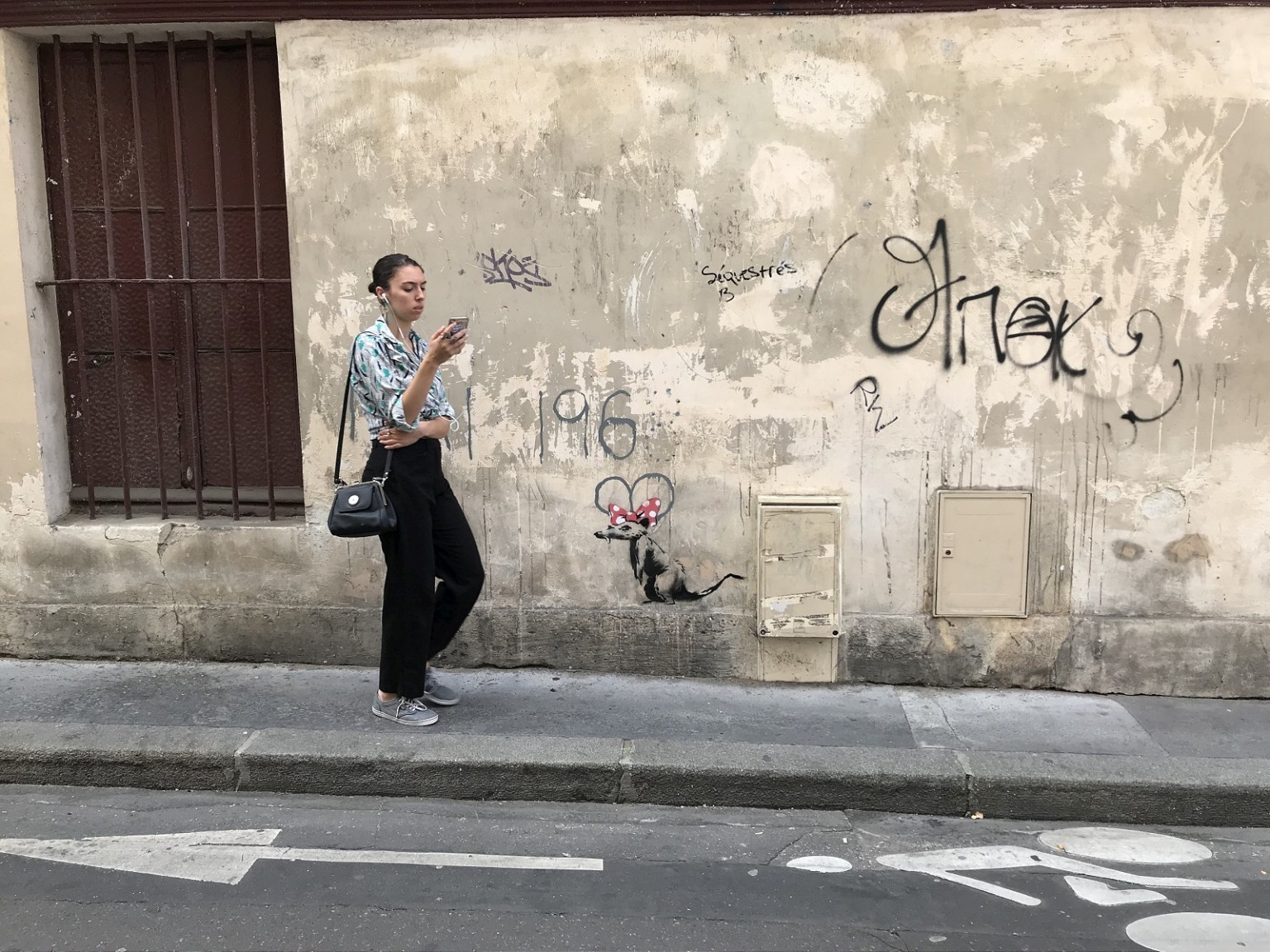 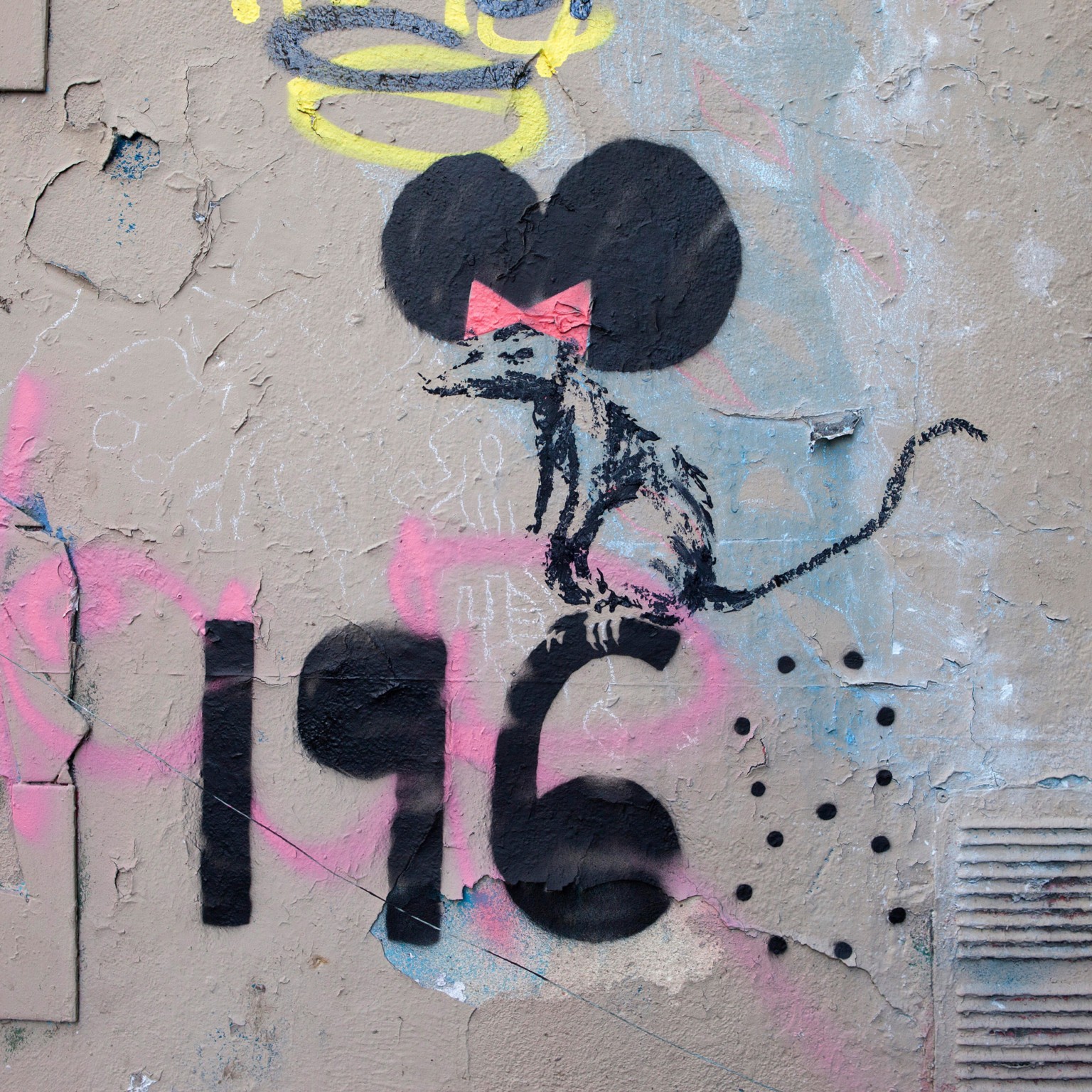 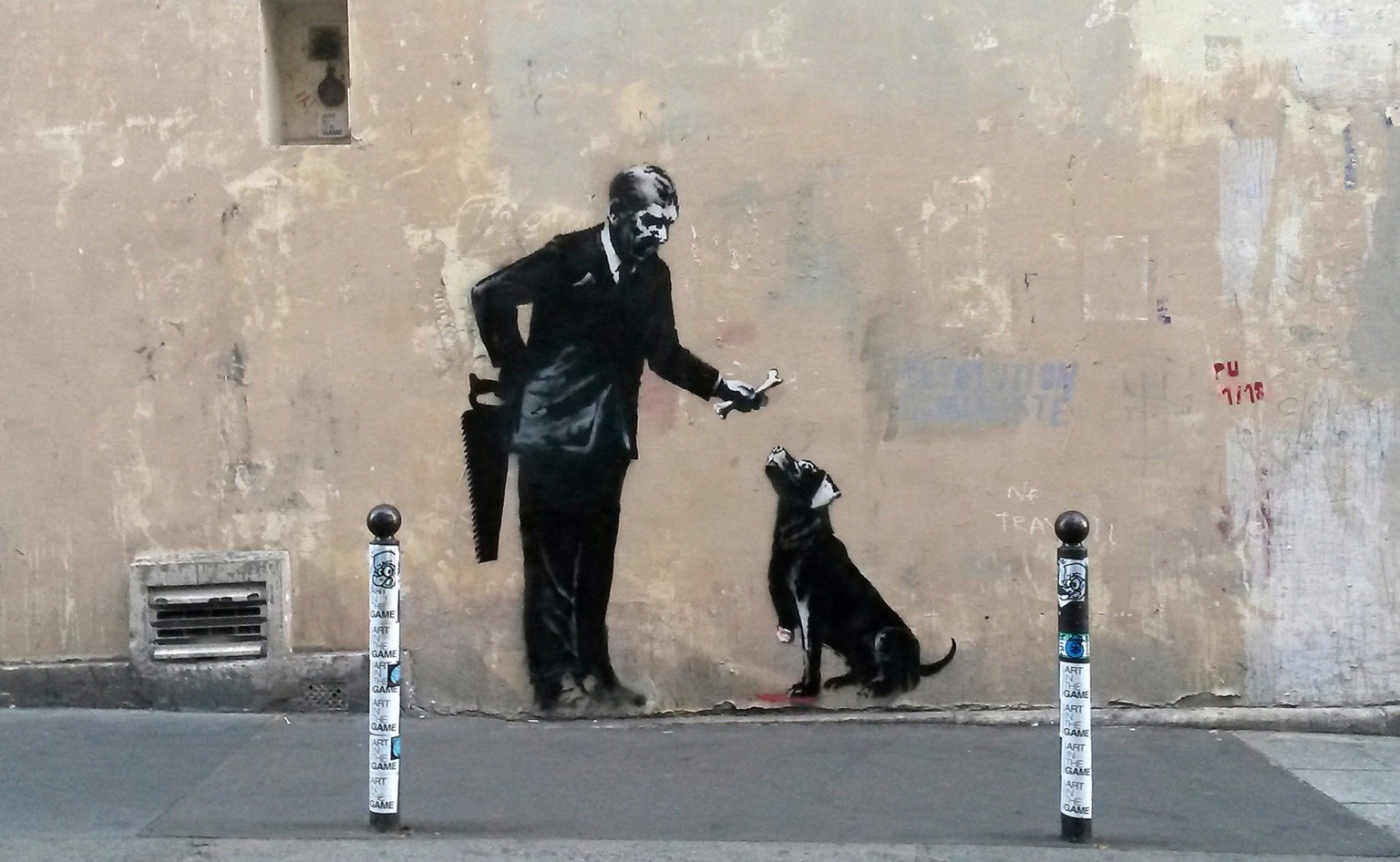 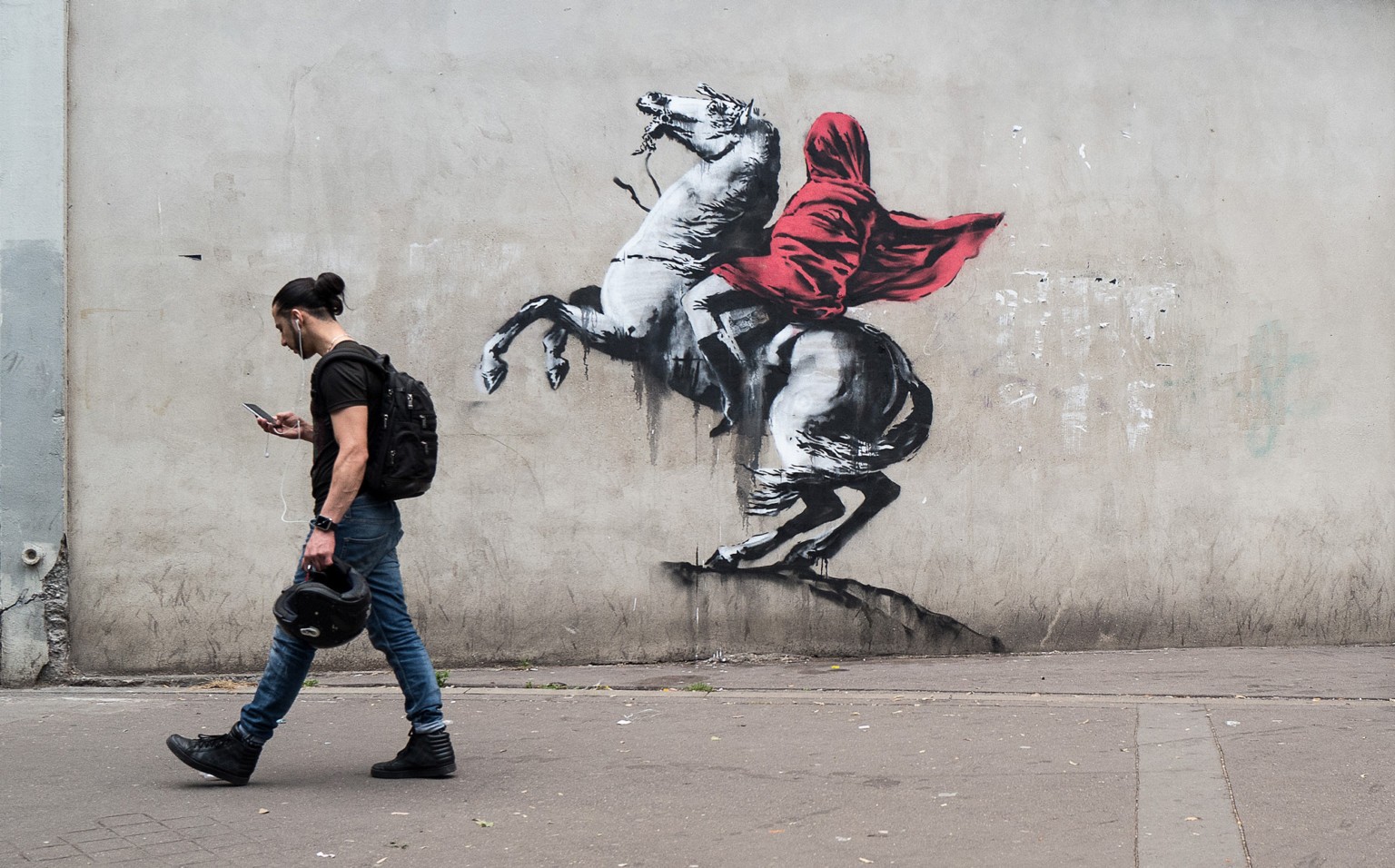 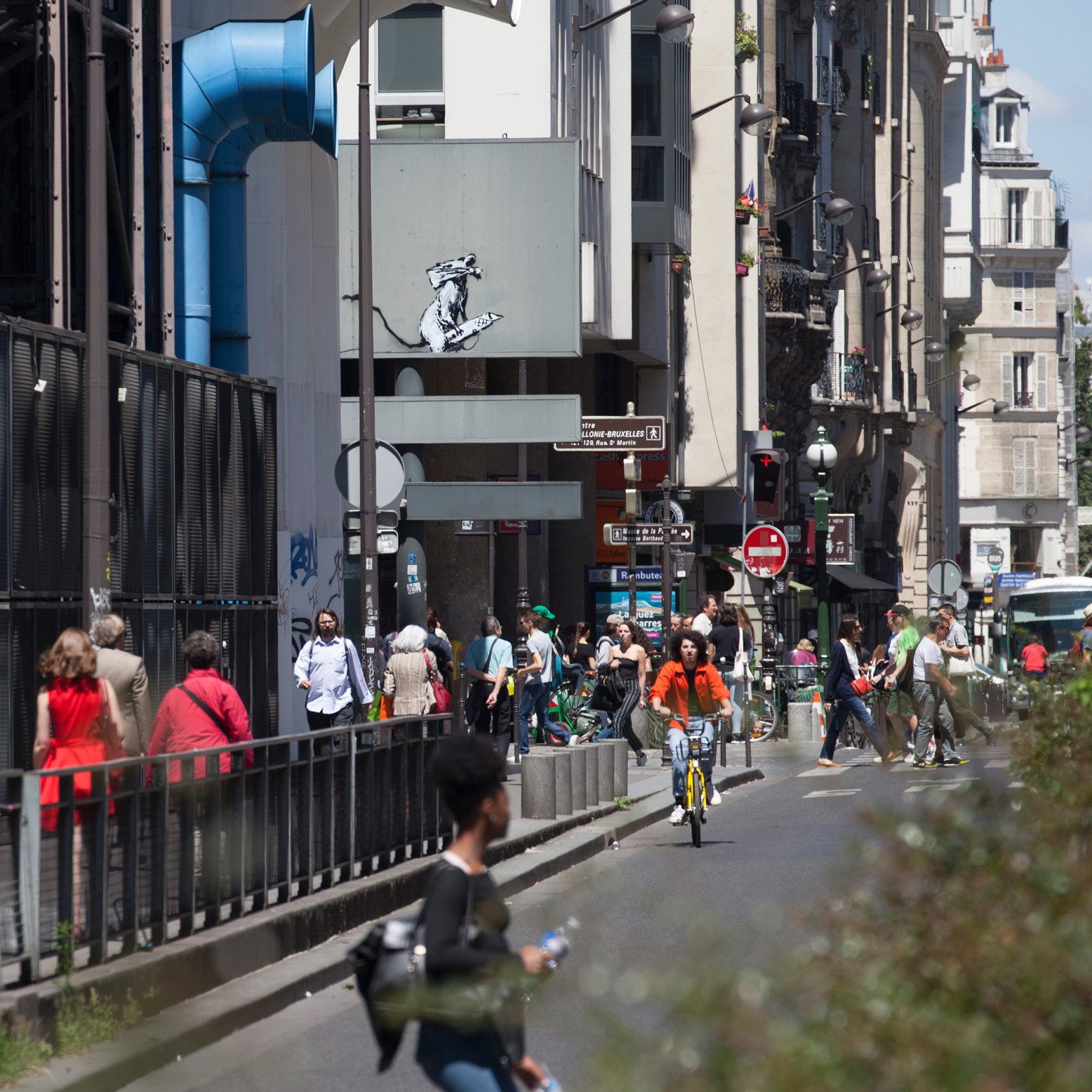 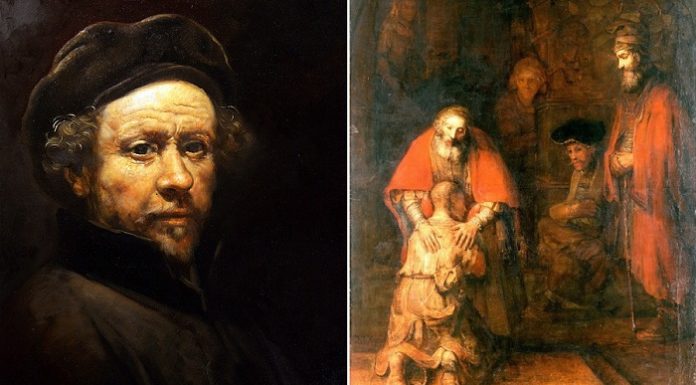 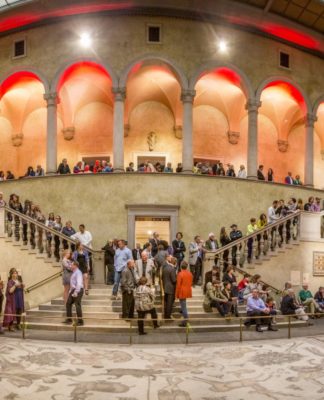 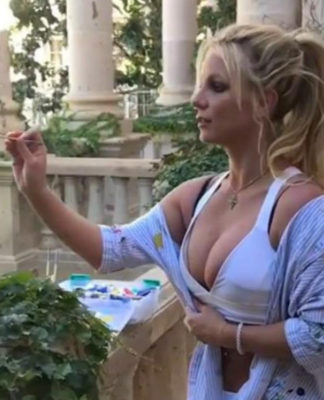 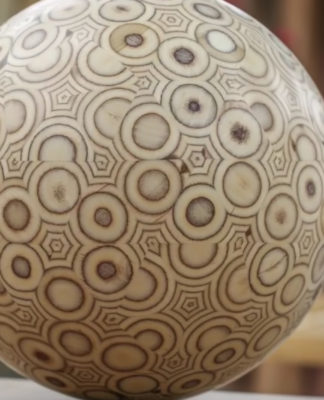 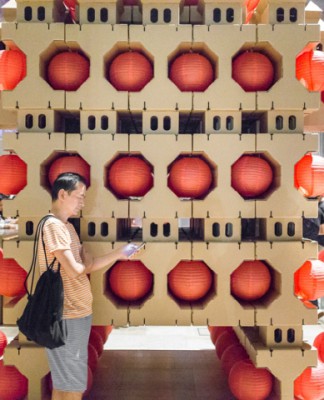