Home Events Motion A Dense Cluster of Birdhouses by Artist Bob Verschueren Rests in a... 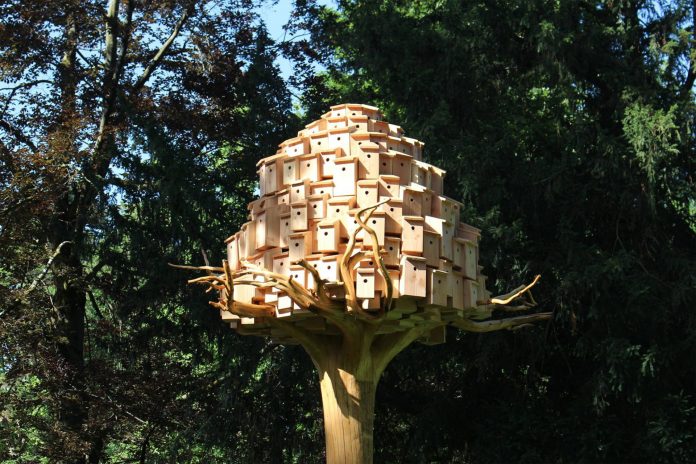 Hopefully, the birds flocking to Bob Verschueren’s wooden housing complex won’t mind if their neighbors stay up late chirping or make too much noise as they head out in the morning to look for worms. Resembling a dense apartment building with shared walls and common perches, Vershueren’s “Implantations” features rows of stacked homes that vary in size for multiple birds to live in simultaneously. They’re a stark contrast to traditional single-family birdhouses.

The Brussels-based artist erected the tree-like pillar—which also bears a likeness to the Tower of Babel—in the Jardin de l’Europe as part of Annecy Paysages 2017, an annual festival that embeds art throughout the French city. After its debut, the work was installed permanently.

For more of Verschueren’s work, check out the book he released in 2013. You also can find future installation plans that merge art, nature, and landscapes on Annecy Paysages’s Instagram. (via Jeroen Apers)