Home News 7 Must-See Works to Seek Out at the ADAA Art Show, From... 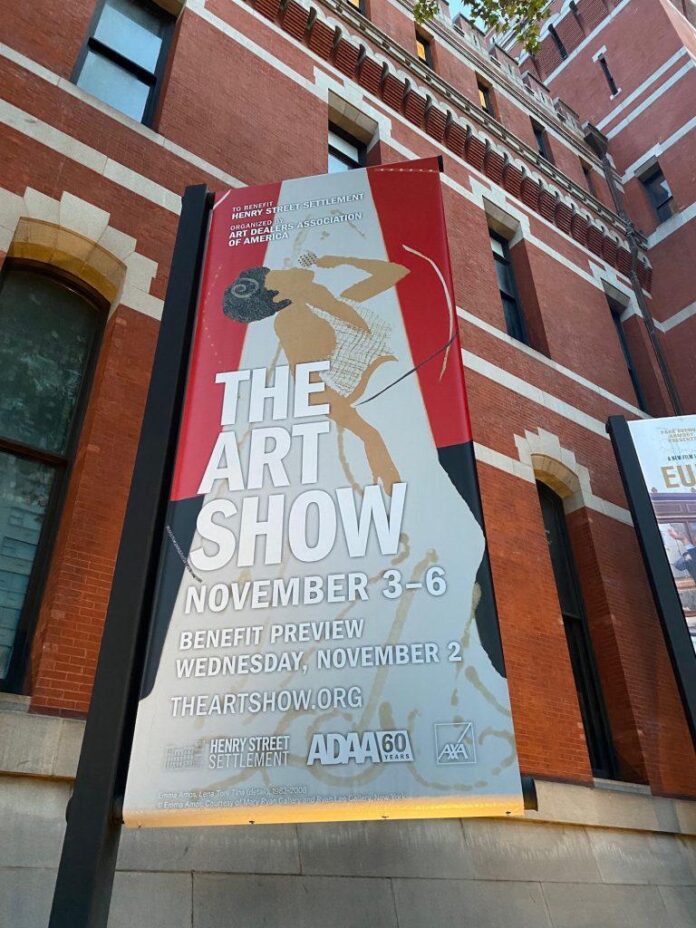 The Art Show, the annual art fair (and one of the originals), hosted by the Art Dealers Association, threw open its doors at the Park Avenue Armory last night to welcome the usual crowds of veteran collectors and connoisseurs, many from the nearby Upper East Side neighborhood. While that gives the fair a local feeling, this year’s edition—celebrating the event’s 60th anniversary—is the largest iteration of the show to date. With 78 member galleries participating, there is a vast range of work to take in, but the neatly laid-out floor plan with just a few vertical aisles makes the fair easy to navigate.

Like most other art fairs impacted by the pandemic, The Art Show went on hiatus during the peak of the pandemic (it was one of the last major fairs to take place IRL in 2020, when it was held earlier in the calendar) but is now back in full force. And the enthusiasm at the packed reception was palpable.

The art collector and actor Cheech Marin—who is part of the art fair programming this year, as the headliner speaker—was on hand for the opening party on Wednesday night, which benefits the Henry Street Settlement on New York City’s Lower East Side. His discussion Thursday evening, with Artnet News Editor-in-Chief Andrew Goldstein, will focus on how he formed one of the preeminent collections of Chicano art in the world, and his newly opened museum, The Cheech Marin Center for Chicano Art & Culture of Riverside Art Museum—familiarly called The Cheech—in California. 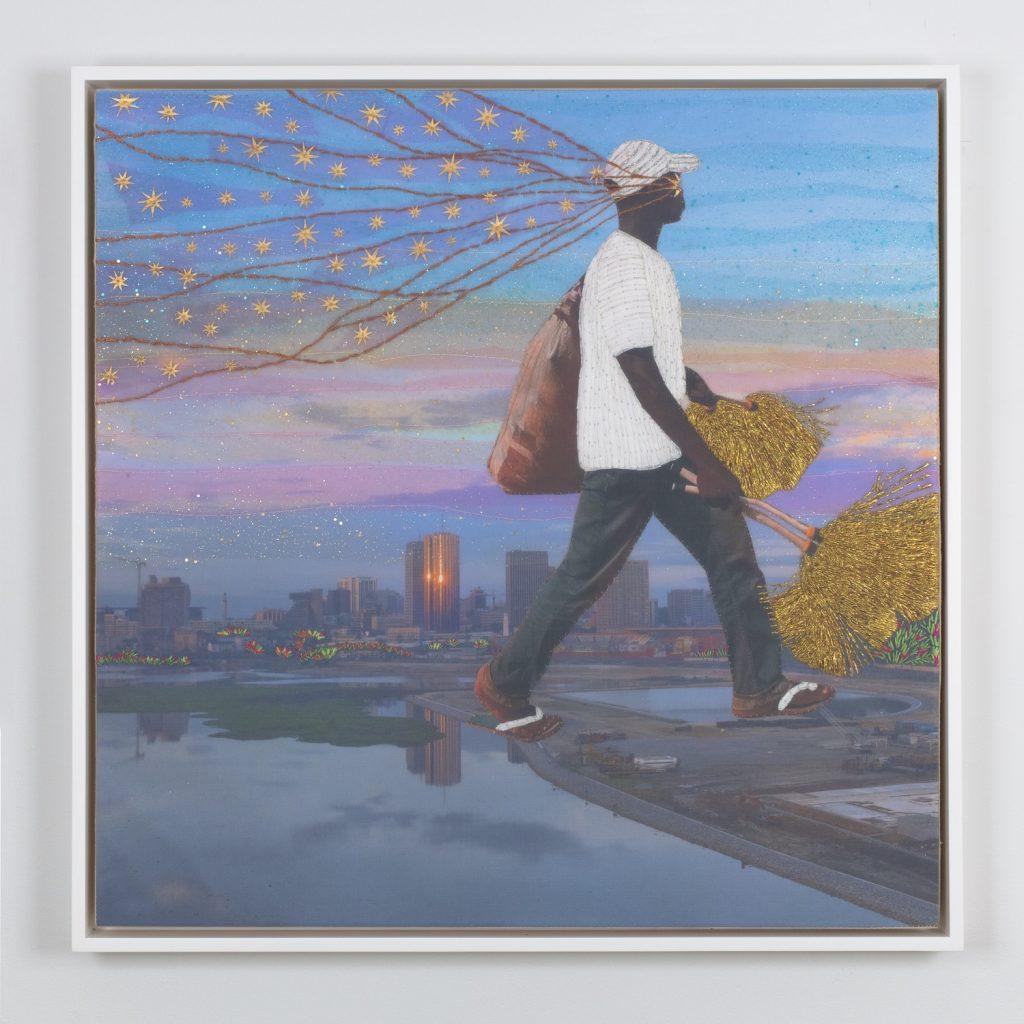 Joana Choumali, I HAVE LOVED THE STARS TOO FONDLY TO BE FEARFUL OF THE NIGHT (2022). Image: courtesy of the artist and Sperone Westwater.

Why It’s Special: The gallery presented a solo show of seven new photographic works by Ivorian artist Joana Choumali from her latest series, “Alba’hian,” titled after an Agni word which highlights the powerful energy that comes with the first light of morning. Chournali embarks on daily walks between 5 and 7am, often photographing the Abidjan landscape at dawn.

These works are created with a mix of materials and techniques, including collage, embroidery, quilting and photomontage. Choumali builds up these early morning images by superimposing layers of sheer toile and gold paint atop them and adding other photographs, such as silhouettes of figures or quiet scenes on empty roads. She calls the dawn “a magical time, where there is a sense of dialogue between reality and dream.” 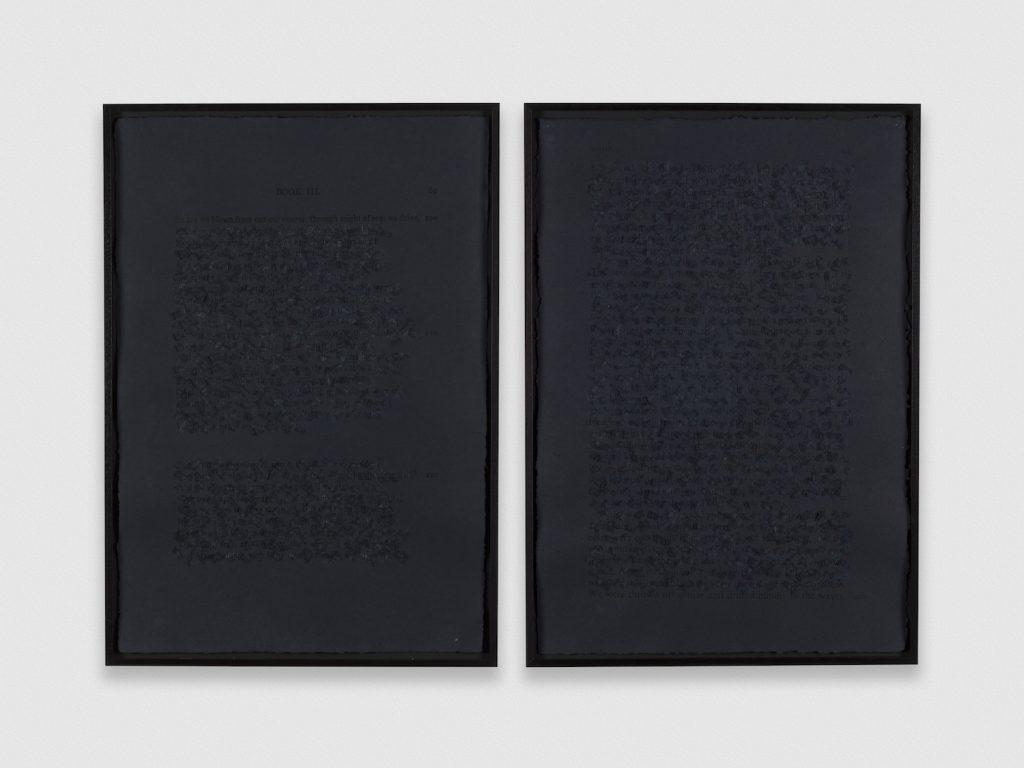 Why It’s Special: Collins’ eye-catching abyssal blue diptych was part of a larger group show focused on “Water” at the booth of new ADAA member and first-time exhibitor Patron Gallery, of Chicago. Patron director Julia Fischbach explained that the diptych is part of a series focused on andin which the artist looked at more than 100 different translations from the same original Greek text to examine how they differ and how language is broken down. Here, as with most of the works in the series, there is a direct comparison of translations in the side-by-side images, which are presented on handmade, deep-blue paper. Lines are obscured by the artist attaching pieces of paper dabbed in her own saliva. “It’s very physical and they have this beautiful texture,” Fischbach said. “Ultimately she’s putting her own DNA into this, even though it’s about something else.” 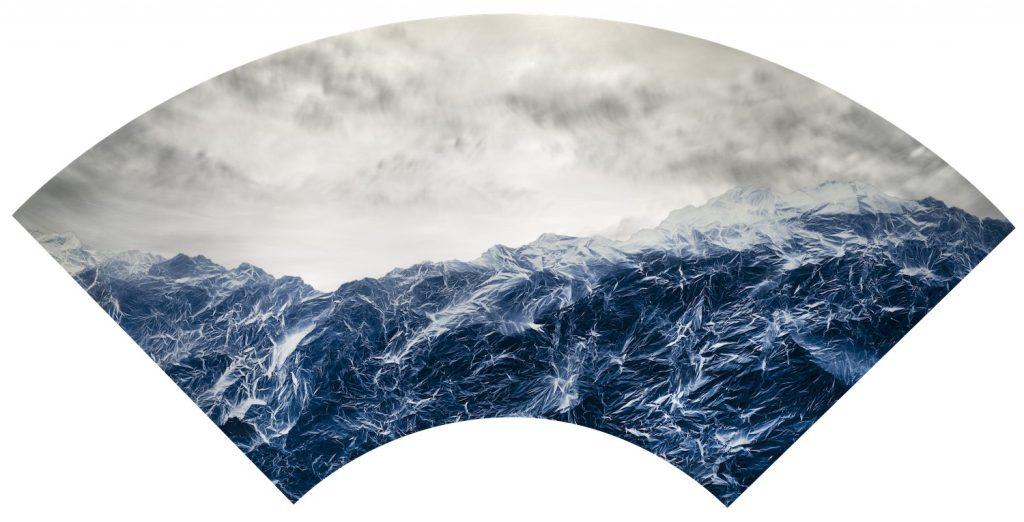 Why Its Special: So much goes into the creation of Wu Chi-Tsung’s meditative, serenity-inducting , such as this giant fan-shaped one, which anchored the works in the solo presentation of the booth, created specifically for the show.

They are a fascinating mix of Chinese classical ink painting, which the artist is trained in, as well as the cutting-edge photographic techniques he used to create them. Chi-Tsung prepares layers of cyanotype photographic paper, treated with a photosensitive coating, that are crumpled, exposed to sunlight, developed and then mounted onto metal. The finished products are collages that allude to landscapes found in Chinese shan shui paintings. Throughout his practice, the artist connects the art of Eastern and Western cultures to blend traditional aesthetics within a contemporary language.  Check out this short film, created with the gallery, about Chi-Tsung’s inspiration and working process. 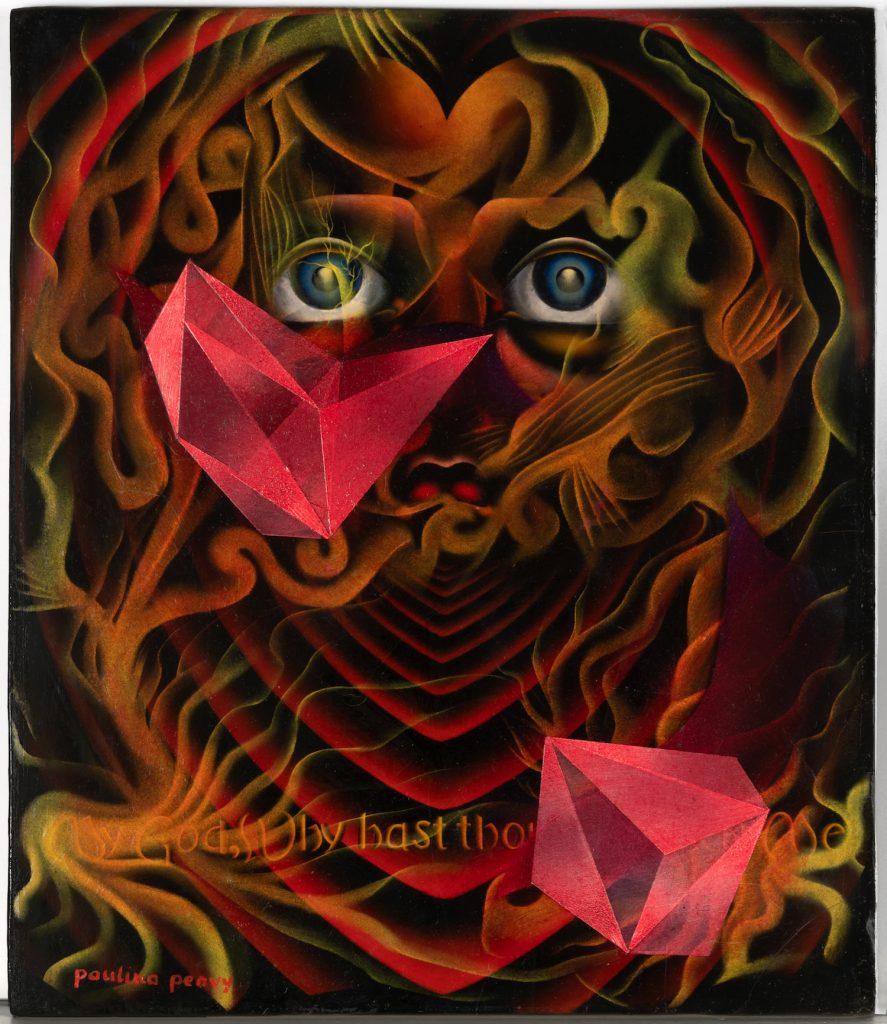 Why It’s Special: Peavy is another classic example of an under-appreciated female artist who garnered little attention during her lifetime—or worse was dismissed over occult-related subject matter that was deemed too provocative at the time. This has been changing over the past year, thanks in part to Edlin’s representation of the artist, and her prominent placement and reception at the 2021 edition of “Greater New York” at MoMA P.S. 1.

This is one of three works on view in that show that were part of a commissioned series for the Golden Gate International Exposition of 1939, held on Treasure Island in San Francisco. To decide the commissions, the Exposition had a host of jurors, one of which was “enchanted by the occult themes Peavy encoded in her paintings and their potential to activate humanity,” according to a forthcoming book by the novelist Laura Whitcomb.

Peavy’s career spanned most of the 20th century and she witnessed major transformative moments in American culture, such as the women’s suffrage movement, the Civil Rights era, the space age, the sexual revolutions, and several wars. “Peavy responded to these changes with her work and also explained the esoteric and occult foundation behind her artistic imagination,” the gallery said.

During the 1920s and 1930s, Peavy probed the reaches of the available esoteric literature and philosophy and joined the ranks of other women channeler-artists including Hilma af Klint, Georgiana Houghton, Emma Kunz, Agnes Pelton, and Ithell Colquhoun. 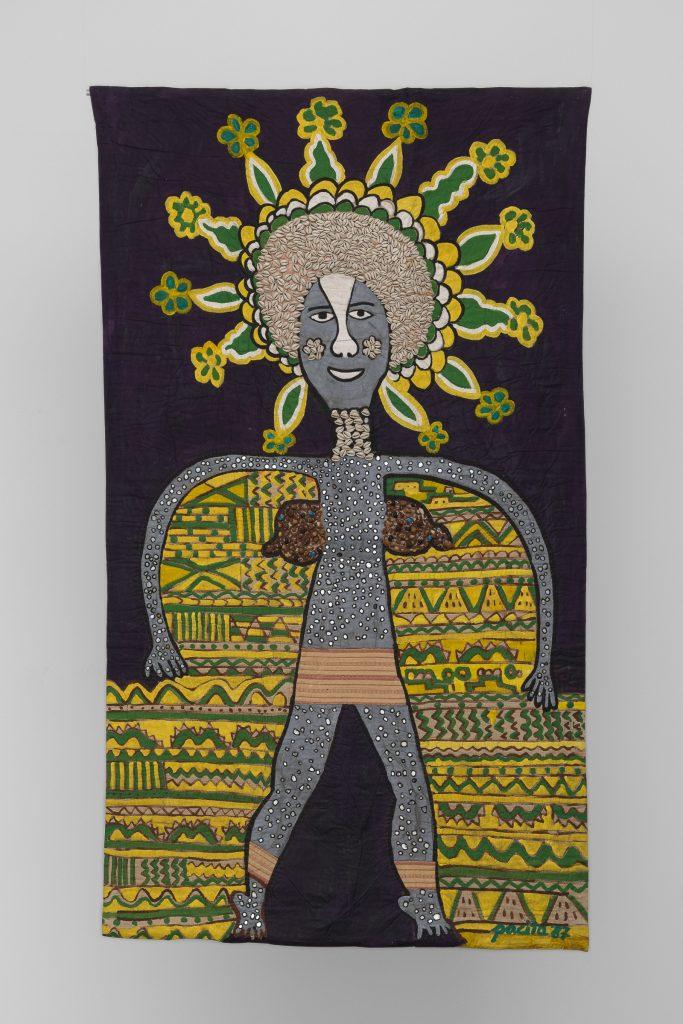 Why It’s Special: The sun goddess-like central figure depicted on this ornate quilt is embellished with cowrie shells, mirrors and Nepali beads, reflecting the techniques Abad picked up during her extensive travels in Southeast Asia, the Middle East, Africa, as well as throughout the U.S.

The 7.5-foot-tall Papuan is on hold for a public institution, according to the gallery, which dedicated its entire booth to the solo presentation by the Filipino-born artist. Abad (1946-2004) will be the subject of a traveling retrospective, opening at the Walker Arts Center in spring 2023, followed by the San Francisco Museum of Modern Art and an as-yet-unannounced New York museum in 2024. Other museums that have acquired her work include the Metropolitan Museum of Art, the Guggenheim Museum in New York and Tate in London. 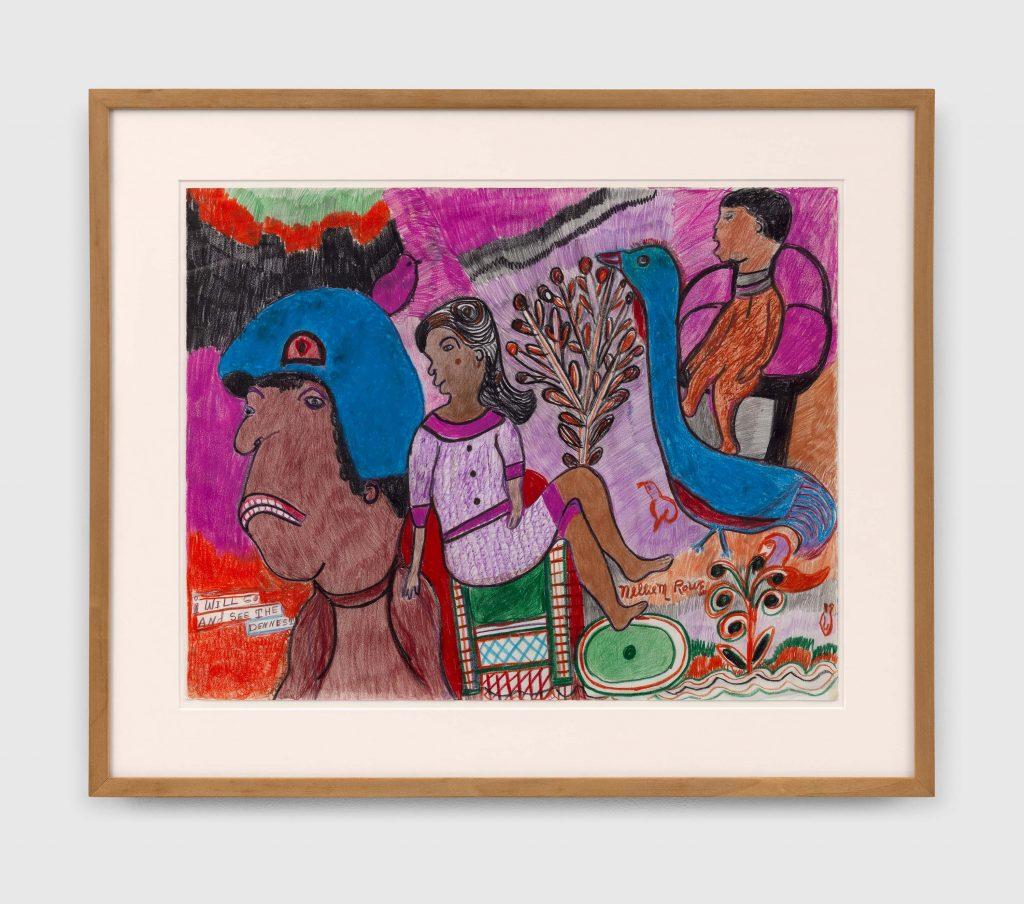 Why It’s Special: Self-taught Black artist, Rowe (1900–82) grew up in Georgia, a generation after slavery was abolished. As a child, she worked on her family’s farm while drawing and making dolls from found clothing. As an adult, she supported herself through domestic labor for nearby households while turning her own house outside Atlanta into a fantastical world, with dolls and whimsical objects hung on tree branches and bushes in her yard. Influenced by quilt-making, which her mother did, she created works using paper, fabric, food cartons and shoe boxes. Birds and flowers appear on her pieces alongside local personalities and references to current events.

Her work at Zwirner comes from the William Louis-Dreyfus Foundation and Family Collections in Mount Kisco, New York, and is shown alongside works on paper by fellow Outsider artists James Castle and Bill Traylor. 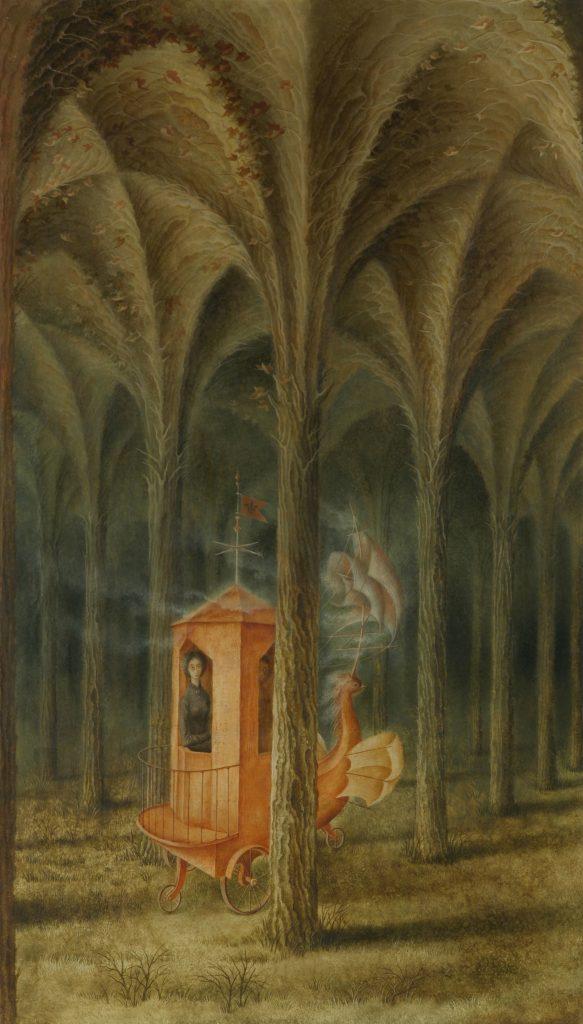 Why It’s Special: The curator Cecilia Alemani wanted to include this painting in her Venice Biennale exhibition, “The Milk of Dreams,” but the anonymous Mexico-based owner didn’t want to lend it—he wanted to sell it. Now the Surrealist painting is tucked away in the back of Gallery Wendi Norris’s booth.

The mystical painting depicts a female figure inside a flying machine that looks like a confession booth, pulled by a dragon. A second ghostly figure appears faintly in another window of the contraption. The setting is a forest that culminates in a cathedral-like dome, nature transforming into architecture, the interior and exterior intertwined. A plume of smoke adds a touch of magic to the scene.

Born in Spain, Varo lived in Paris but fled to Mexico in 1941, just as fascism was spreading throughout Europe. The vaulted ceiling in the Catedral vegetal was inspired by the Alhambra cathedral in Granada, according to Norris.