Home News A Court Has Ruled That Banksy Can Keep His Trademarks—and Anonymity—in His... 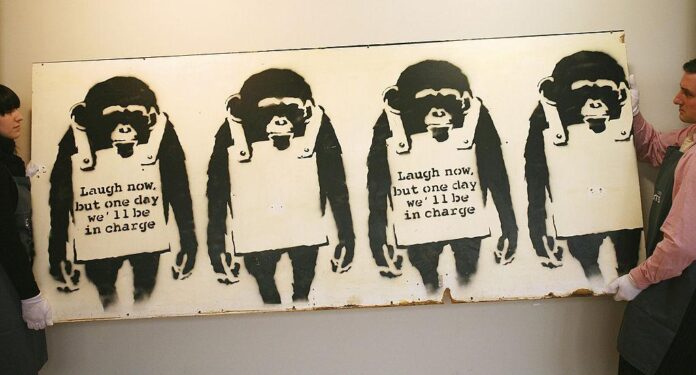 A board of appeal has just reversed a 2021 decision that sought to invalidate the trademark registered for Banksy’s iconic “Monkey Signs” series.

Carrying a sandwich board with a slogan that is affixed around the neck, the monkeys have been cropping up in Banksy’s work for decades.

Though Banksy’s art is automatically protected by copyright, the trademark was registered in 2018 by Pest Control, Banksy’s authenticating body, for a 2002 work created in Brighton in which the monkey’s sign reads “Laugh now, but one day we’ll be in charge.” Unlike copyright, trademarks require applications and protect brands or items that identify one particular business from another.

Banksy has claimed trademarks for other works, and had previously run in to trouble with E.U. courts for maintaining an anonymous identity.

The mark was challenged a year later by Full Colour Black, a U.K. greeting card company that uses imagery works by the street artist. It applied for its cancellation on the basis that the work was not distinctive enough and that the mark had been registered “in bad faith.”

This argument was supported, in May 2021, by the European Union Intellectual Property Office. The ruling also stated that the work “was free to be photographed by the general public and has been disseminated widely.” It noted that Banksy had previously spoken strongly against copyright and insisted that his work was legally free to reproduce.

The company’s attorney, Aaron Wood of Brandsmiths, said at the time to World Trademark Review that the “real nail in the coffin” that determined the ruling was “the public comments of Banksy and his lawyer.”

The latest ruling, published last week, stated that after further review, the arguments and evidence provided by Full Colour Black did not support any evidence of “dishonest behavior” on the part of Pest Control. It concluded that, “consequently, the presumption of good faith is still valid and the cancellation applicant failed to prove the contrary.”

This means the work in question is protected by both copyright and by a trademark.

“This is a significant victory for Bansky, or more accurately Pest Control Office Limited, which enables Banksy to conceal his identity,” said the trademark specialist Lee Curtis from HGF Limited, according to a report in The Art Newspaper.

“The fact that he may have said on two occasions that “copyright is for losers” should not impact on the validity of his trademark registration,” he added.

Wood, the attorney representing Full Colour Black, said: “We are naturally disappointed by the ruling yesterday, and of course it is out of step with the recent successes. Our key argument was that Pest Control Office had filed these without an intent to use them. The appeal body seems to have overlooked that. In terms of next steps, there are no plans to appeal the decision: we will take a reasoned view based upon what Banksy does next.”

Banksy’s signature stenciled graffiti style is now recognizable to audiences worldwide. A new batch of seven pieces placed across war-torn towns in Ukraine were attributed to the British street artist for sometime before he officially took credit for them.