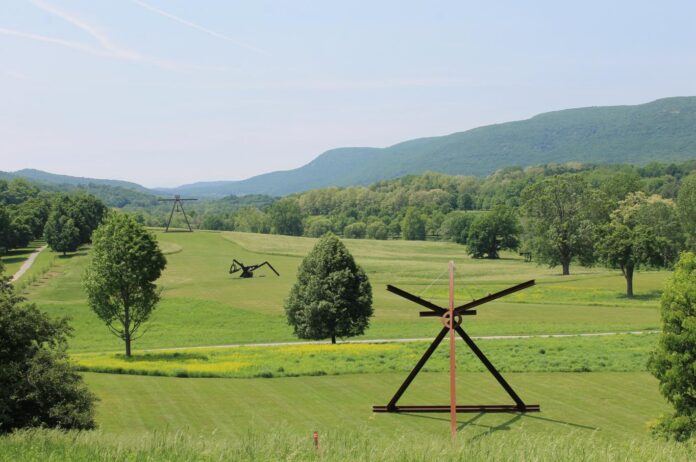 The Storm King Art Center in upstate New York will embark on a transformative $45m redesign this autumn that aims to enhance the visitor experience and the environmental biodiversity of the beloved 500-acre sculpture park.

The Storm King president John P. Stern (the grandson of the arts patron Ralph E. Ogden, who founded the centre in 1960 with Stern’s father, its former president H. Peter Stern) explains that increased attendance over the last decade and projections for the future have made the redesign essential.

“The advent of social media and our growing programming and exhibitions has all contributed to Storm King having more fans and friends,” Stern tells The Art Newspaper. “We already have this unmatched collection and beautiful landscape in the heart of the Hudson Highlands, so this project was about considering how we could somehow make the experience even better for our visitors.”

Several international architecture and landscape design firms are involved in the project, including the Dublin-based firm Heneghan Peng Architects; the New York-based WXY Architecture and Urban Design, which has worked in close collaboration with the London-based firm Gustafson Porter and Bowman; and the landscape architecture firm Reed Hilderbrand, based in Cambridge, Massachusetts, and New Haven, Connecticut.

One major facet of the project includes the construction of a 7,200 sq. ft building devoted to conservation, fabrication and maintenance, which will have 22 ft-high ceilings and feature five large access doors, a 1,000 sq. ft wood shop, an 800 sq. ft paint booth and other workspaces. The intentionally inconspicuous structure, the first purpose-built building on the site, will be “instrumental to continuing our work with artists on the scale that we do”, says Nora Lawrence, Storm King’s artistic director and chief curator.

She adds, “We’ve conserved some large-scale sculptures over the last few years that have had to travel for painting as far away as Virginia, which is obviously not an ideal situation in terms of costs, logistics and preservation of the sculpture itself. There’s always an active rotation of works that are in need of different types of care, so the ability to do some of these major conservation and maintenance projects on-site will be a game changer for us and what we’re able to offer the public.”

The building will be able to accommodate artists in residence, particularly artists participating in the centre’s Outlooks programme, an initiative launched in 2013 to temporarily showcase the work of emerging and mid-career artists, which this year supported the American sculptor Brandon Ndife’s site-specific commission Shade Trees (2022). Next year, it will facilitate a commission by the German artist RA Walden.

Another branch of the project involves the consolidation of the centre’s parking lots into one 580-space lot, which will open 4.5 acres of the landscape for more art and programming. The lot will feature recharging stations for electric vehicles, easier access for buses and shuttles and dedicated parking for rideshare vehicles. It will lead to a welcome centre featuring a ticketing pavilion, a 4,700 sq ft. outdoor lobby and other amenities.

“We wanted to sequence the arrival so that people leave the traffic behind, move into an area of services and then move down into Storm King proper and no longer see other lots or roads,” says Róisín Heneghan, the co-founder of Heneghan Peng Architects. “We also wanted to minimise whatever facilities needed to be placed as much as possible.”

Claire Weisz, the founding principal of WXY Architecture and Urban Design, adds: “All the buildings, whether it’s the conservation building or the non-gendered washrooms or the information booth, are playing into a shared holistic plan to not separate the landscape from the architecture. Rather, it’s about creating a bridge between indoor and outdoor space that wasn’t present at Storm King before, and ensuring that these spaces are contributions to the environment.”

More than 600 trees will be planted to increase shade and plant biodiversity on the grounds, including dogwoods, redbuds, sweetgum, tulip trees, red maples and poplars. There will also be upgraded water management systems installed throughout to ensure that the water on-site remains there.

“We wanted to think about what could help bring Storm King more into the 21st century in terms of landscaping principles, or how to make it more resilient by examining how water is moving through the site and the way planting could be increased and diversified,” says Beka Sturges, the principal of Reed Hilderbrand. “It’s also interesting to think about how landscaping can bring more attention to the works that are associated with water or the woods, which feel much more secondary than the ones in the meadows and the lawn.”

The project is due to be completed in 2024. It is being funded in part with a $2.6m donation from New York State; $2m from Empire State Development; and $600,000 by the New York State Energy Research and Development Authority through a programme dedicated to carbon neutral development.

“There’s been so much positive change at Storm King as our profile has grown and continues to grow,” Lawrence says. “The types of projects we’ve been able to produce with artists have ramped up and changed, and now we’re just better equipping people for their visits.”

Storm King is currently hosting a major exhibition by the Kenyan-American artist Wangechi Mutu. Next year, it will unveil a permanent work by the renowned American sculptor Martin Puryear, the US representative at the 2019 Venice Biennale, which takes the form of a 20 ft-tall curved brick dome. The piece will join more than 100 permanent sculptures at the centre, including pieces by Andy Goldsworthy, Henry Moore and Isamu Noguchi.

‘It repurposes a building that was first made to cause terror’: arts centre in former Ku Klux Klan auditorium names inaugural leader