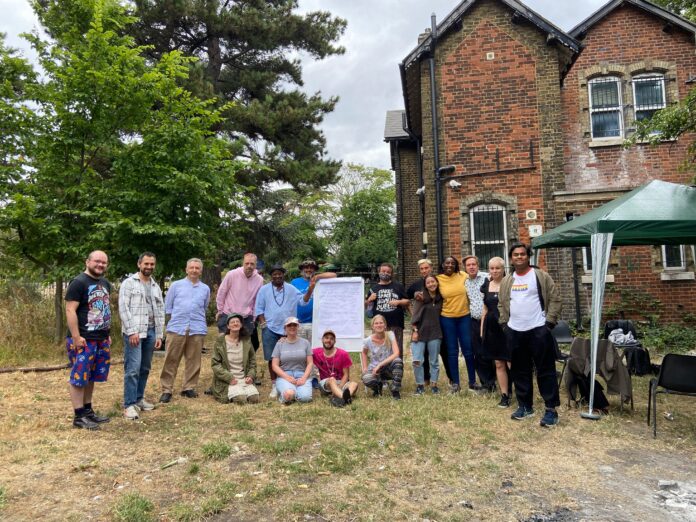 This winter, many British museums will welcome homeless people seeking a place to stay warm. But a new museum, called The Museum of Homelessness, will soon be putting the experiences of homeless people front and centre.

The museum has been created by the husband and wife Matthew and Jessica Turtle, both of whom work in the UK museum sector. They founded the concept of the museum in 2015, but it has been somewhat homeless itself, popping up at major galleries such as Tate Modern in London, Glasgow’s Gallery of Modern Art and the Manchester Art Gallery, as well as in hostels, temporary housing spaces and day centres.

But from 2023 the museum will be permanently housed at Manor House Lodge in Finsbury Park, North London, where its national collection for homelessness, poverty and social action will be on display.

The co-founder Jessica said she and her husband wanted the museum to make the arts more accessible to people in poverty.

“We both work in museums, but we think many of them could do more to be socially active,” she says. “We thought maybe there’s a chance for a different museum, one that was for people in poverty. Ultimately we wanted to create something that was better for poor people.”

The museum is born from personal experience for Jessica, who grew up in a homeless family. “I was born to a homeless family and was homeless as a child and young adult,” she says. “I went to work in the arts and carved out a decent career. But I would always hide that part of my past. Being working class in the arts is not easy.

The realities of homelessness will inform the way the museum acquires objects for its collection, and the ways in which the collection is presented. Turtle says.

“We wanted to unpack the process of museum collecting and make it more ethical,” she says. “We’re trying to respond to questions many museums and galleries are asking themselves about the act of collecting and their colonial heritage. This process is inherently extractive; museums take things and put them on display. But we only collect objects from people who want to give to the collection. Each time we take an object, we also ask to take a story from the owner, which is often quite therapeutic.”

These stories are performed as part of the display. The museum will also host talks and workshops developed by people with experience of homelessness. It will also provide 250 support sessions per year—five per week—and will include regular surgeries focused on housing and legal rights as well as the provision of essentials at a time when the cost-of-living crisis is biting.

The museum’s last public event, Secret Museum, was named as the Exhibition of the Year 2021 at the Museums and Heritage Awards, with visitors following clues around the streets of London to find the exhibition, which then used curated objects and storytelling to communicate the feeling of homelessness.

Turtle urged established museums to open their doors to homeless people this winter. “The idea of museums as welcoming spaces is something we should champion,” she said. “We do think museums should be open to the homeless community; it’s something libraries do a great job of. Museums and galleries could do more.”

As part of the museum’s founding, Turtle has been employed by the Tate and Manchester Museum to train their staff to be more welcoming to homeless people, and has also worked with Arts and Homelessness International, who encourages arts professionals to better engage with homeless visitors.

The Museum of Homelessness, which currently pays all staff the same wage as part of a flat salary structure, will open in spring 2023. “The Manor House Lodge hasn’t been used properly for a number of years, especially during Covid when it fell out of use,” Turtle says. “We’re really excited about making it a true community asset. We want to make it a museum that is unlike any other museum in the world.”

The museum will seek to employ staff with a history of homelessness but will also welcome people who have always had a roof over their heads.

“We do welcome volunteers and team members who haven’t been homeless,” Turtle says. “We want to welcome people from a real mix of backgrounds. That’s where the magic happens; people coming together for a common purpose.”