Home News A Scrap of a Dead Sea Scroll That Mysteriously Ended Up in... 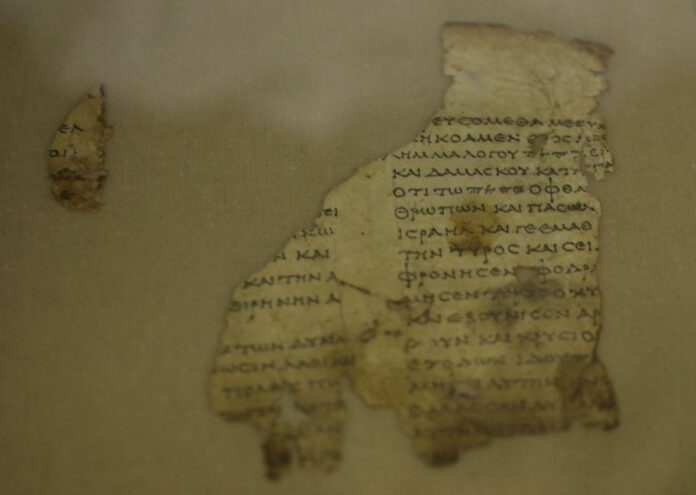 A missing scrap of a Dead Sea Scroll that ended up in Montana has been returned to the Israeli Antiquities Authority (IAA).

According to ABC News, the section of the scroll measures just larger than a postage stamp and features four lines of script reading “don’t send to” and “of no help,” according to .

The relic appears addressed to Ishmael, a common name during the later period of the Iron Age (1200 B.C.E. to 600 B.C.E) that also means “God will hear.”

Professor Shmuel Ahituv of Ben-Gurion University in Beersheba, Israel, who led the quest to bring the papyrus back to the Middle East, began his mission in 2018, when he discovered a photo of the scrap. He then teamed up with Eitan Klein, the head of the IAA’s Antiquities Theft Prevention Unit, to locate and bring it back.

How the scrap ended up in Montana remains unclear, and the IAA has declined to name the person who had the relic.

According to Klein, the one-time owner inherited the artifact from his mother, who received it as a gift during a 1965 trip to Israel either from Joseph Sa’ad, a former curator at Jerusalem’s Rockefeller Museum, or Halil Iskander Kandu, a Bethlehem-based antiquities dealer also known as “Kando.”

But the fuller journey of this Dead Sea scrap, and how Ahituv really uncovered it, remains unclear.

Klein told ABC News that authorities invited the scrap’s owner to Jerusalem in 2019, where he learned how rare documents are preserved and agreed to an unspecified arrangement to repatriate the relic, which finally took place this week.

Joe Uziel, the co-director of the IAA’s Tel Burna Archaeological Project, authenticated the scrap by comparing its radiocarbon dating age with its handwriting style.

Uziel told ABC News he’s “very certain” this one is real. (Others, like those found at Washington’s Museum of the Bible in 2019, have turned out to be fake.)

“Each new document sheds further light on the literacy and the administration of the First Temple period,” Uziel told , referring to the period in the Hebrew Bible covering the reign of King Solomon.

Ahituv will speak about the find on September 15 during the IAA’s First Judean Desert Conference at the Bible Lands Museum in Jerusalem.

Last March, for the first time in 60 years, archaeologists discovered a new fragment of the Dead Sea Scrolls in the Qumran Caves, also known as the Cave of Horror, on the northern shore of the Dead Sea.