Home News The Tudor Dynasty Seethed With Insecurity and Intrigue—and That’s What Made Its... 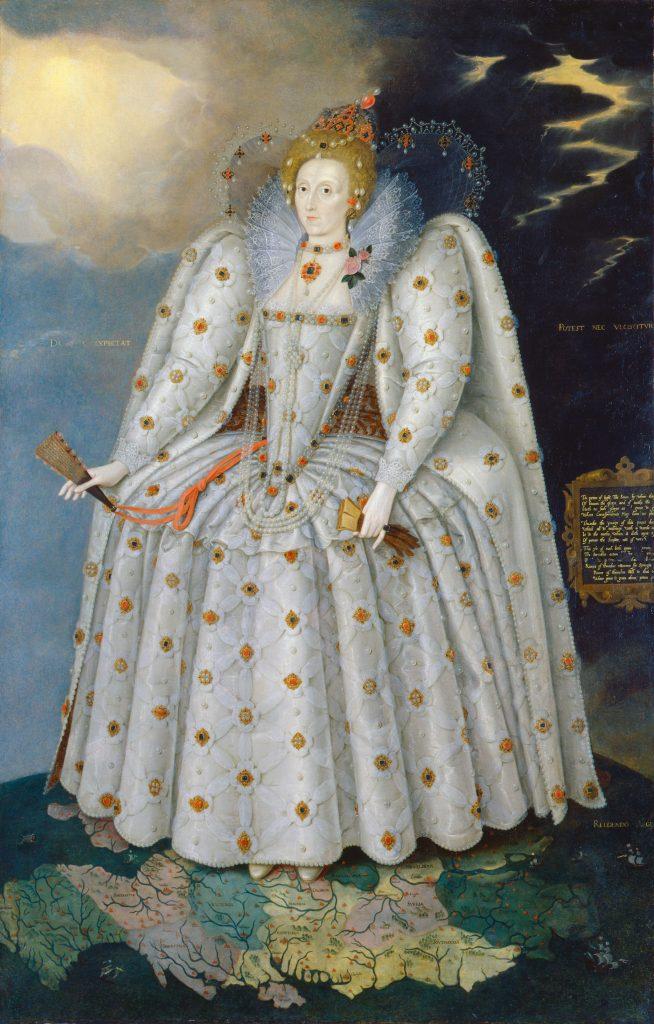 The entrance to the Metropolitan Museum’s exhibition “The Tudors: Art and Majesty in Renaissance England” is dominated by a pair of bronze angels bearing candlesticks and an imposing nine foot high bronze candelabrum. These exquisitely crafted works were commissioned from Italian sculptor Benedetto da Rovezzano by Henry VIII’s powerful chancellor, Cardinal Thomas Wolsey, for his future tomb. One contemporary maintained that this monumental structure, upon completion, would be the costliest mausoleum in the world. When Wolsey was deposed and charged with treason for his failure to gain an annulment for Henry’s marriage to Katherine of Aragon, the project was appropriated by the King for his own memorial. But following Henry’s death and the succession battles that brought Elizabeth I to the throne, the tomb project was abandoned. The individual elements that had been completed were scattered, melted down, or lost and these three have only now been reunited. Thus, the three sculptures present an apt symbol of both the opulence and ostentation of the Tudor era and also of the utter precarity of power in that age of absolute monarchy. Even Kings could not retain their influence after death.

In many ways, the Tudors are the historical pop stars of the English monarchy. With the possible exception of Princess Diana, no other royal figures have had so many plays, films, mini-series, and books created about them. Vast numbers of people can recite all of Henry VIII’s wives or will instantly recognize the starched white ruff that was Elizabeth I’s sartorial trademark. Part of the appeal is the soap opera-esque fascination of Tudor palace intrigues. Great ones rise and fall, lesser characters plot their way to power, and unexpected turns of events upend carefully laid succession plans. But, as curators Elizabeth Cleland and Adam Eaker argue, the Tudors’ longevity is also a function of what we might describe today as a brilliant marketing strategy, of which art and art patronage were essential elements.

The Tudor’s claim to the monarchy was shaky. They came to ascendance following the bloody War of the Roses, so called because it pitted the House of York, whose symbol was the white rose, against the House of Lancaster, whose symbol was the red rose. For thirty years, power passed back and forth between the two families even as various other aristocratic families were completely wiped out. The war ended with the victory of Henry Tudor, a Welshman connected to the Lancaster line through the out-of-wedlock birth of his great grandmother. Because all other more direct claimants to the Lancaster throne had been killed in battle, he emerged as the heir and cemented his position by marrying the daughter (and sole surviving child) of the deceased York King Edward IV. In doing so, Henry united the country and provided a weary England with an end to the fighting. 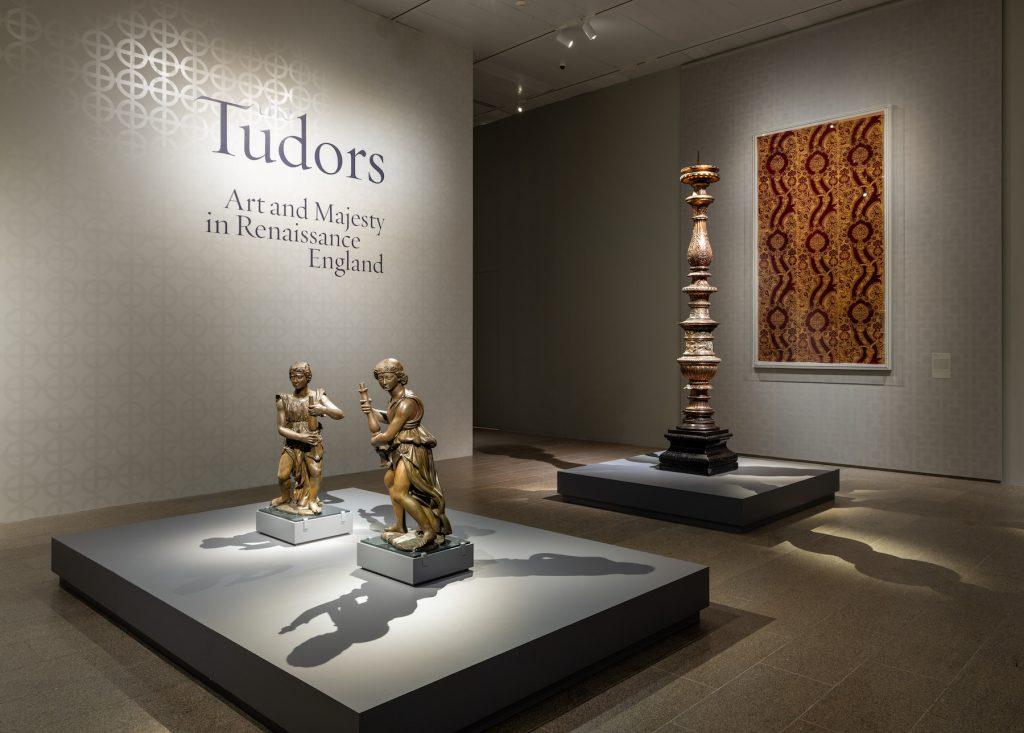 Installation view of “The Tudors: Art and Majesty in Renaissance England,”
on view October 10, 2022-January 8, 2023, at The Metropolitan Museum of Art. Photo by Anna-Marie Kellen, courtesy of The Met.

In an inspired bit of branding, Henry (now Henry VII) symbolized the newfound unity with a heraldic emblem that combined a red and white rose. The Tudor Rose appears throughout the exhibition in paintings, royal clothing, jewelry, and tapestries. Nor was this the only inspired use of imagery to justify the Tudor’s legitimacy. Henry and various successive Tudor monarchs sponsored artworks and decorative objects that linked the family to such real and mythic figures as King Arthur, King David, Saint Paul, and Hercules. 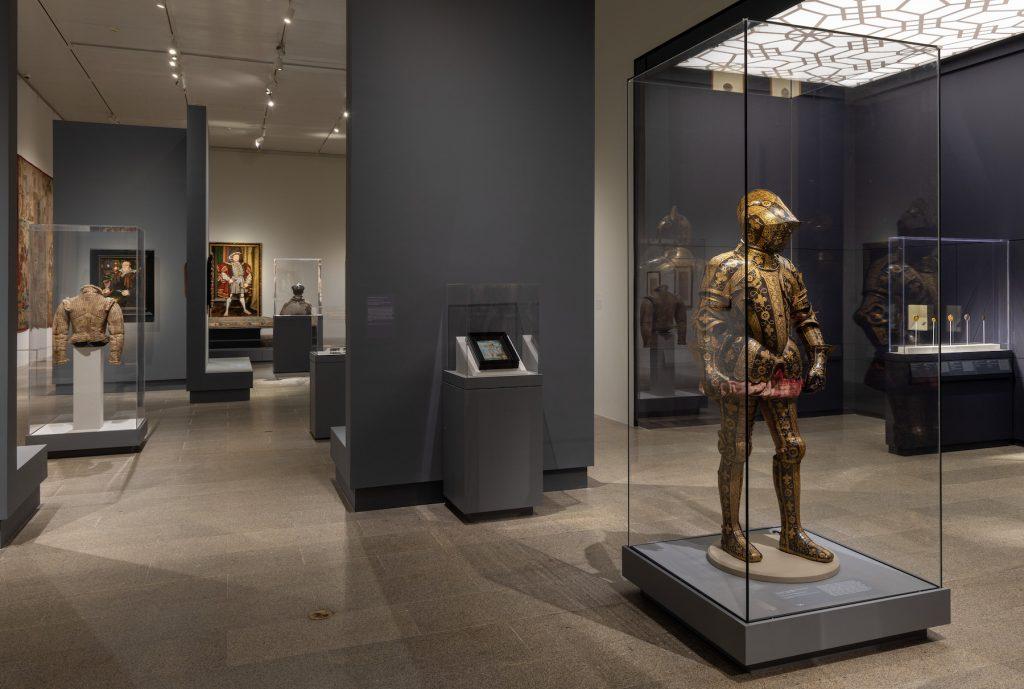 The Met’s exhibition opens with a presentation of the cast of characters in the Tudor drama. Henry VII appears as a mild-mannered sage holding the Tudor rose in a portrait by an unknown Netherlandish artist. His more flamboyant son Henry VIII is represented as a fleshy patriarch in a portrait by the German-born painter Hans Holbein the Younger, himself one of the stars of this show. Henry VIII also appears here with an almost eerie tangibility in the form of his suit of field armor whose girth and height evoke his powerful physical presence. 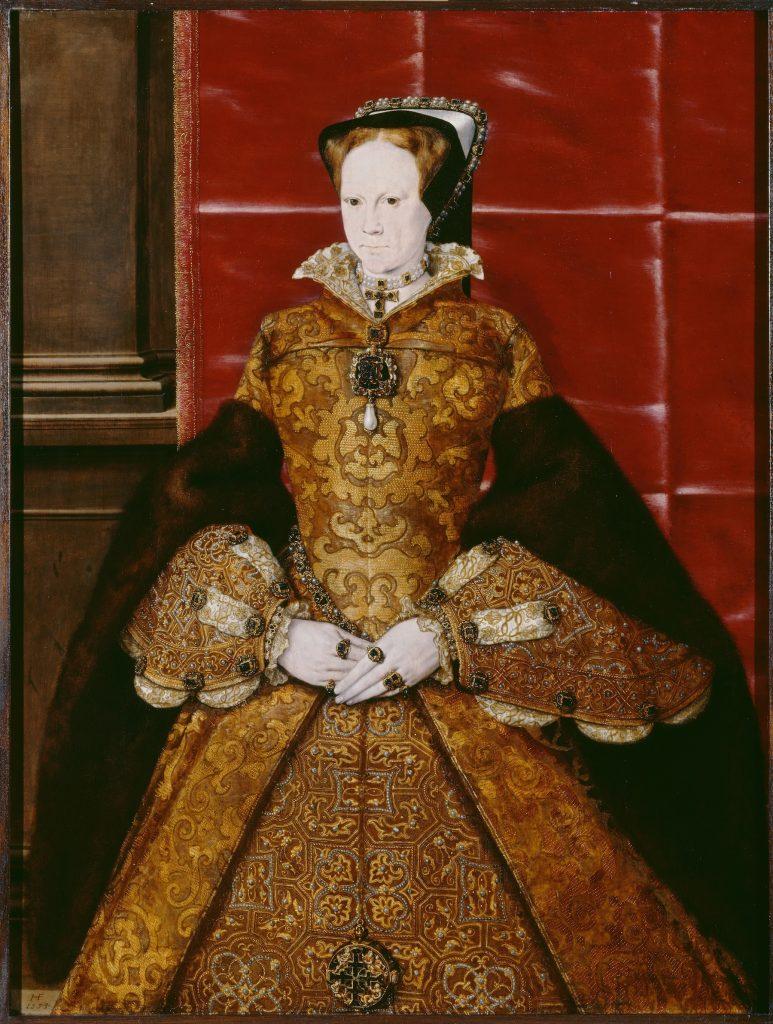 We also meet the two short-lived rulers who followed Henry VIII. A profile portrait as a serious young boy of about ten, also holding a Tudor Rose, presents Henry’s sickly son Edward who died at the age of 15. Queen Mary I (a.k.a. Bloody Mary), the daughter of Katherine of Aragon who tried to reinstate the Roman Catholic religion after Henry’s break from the Church, appears in a full-length portrait by Hans Eworth as a determined woman in an opulent gold brocade gown with a jeweled cross around her neck.

After her death in 1558 at age 42, possibly from cancer, her sister Elizabeth ascended the throne. Here, she is introduced with two full-length portraits. One is a flat, awkwardly painted portrait of the young queen standing stiffly against a gold cloth. This painting may have served as a calling card in marriage negotiations that never came to fruition. The other portrait, painted sixteen years later in 1583, presents an older and more self-assured monarch holding a sieve that is believed to symbolize her now-established status as the Virgin Queen. 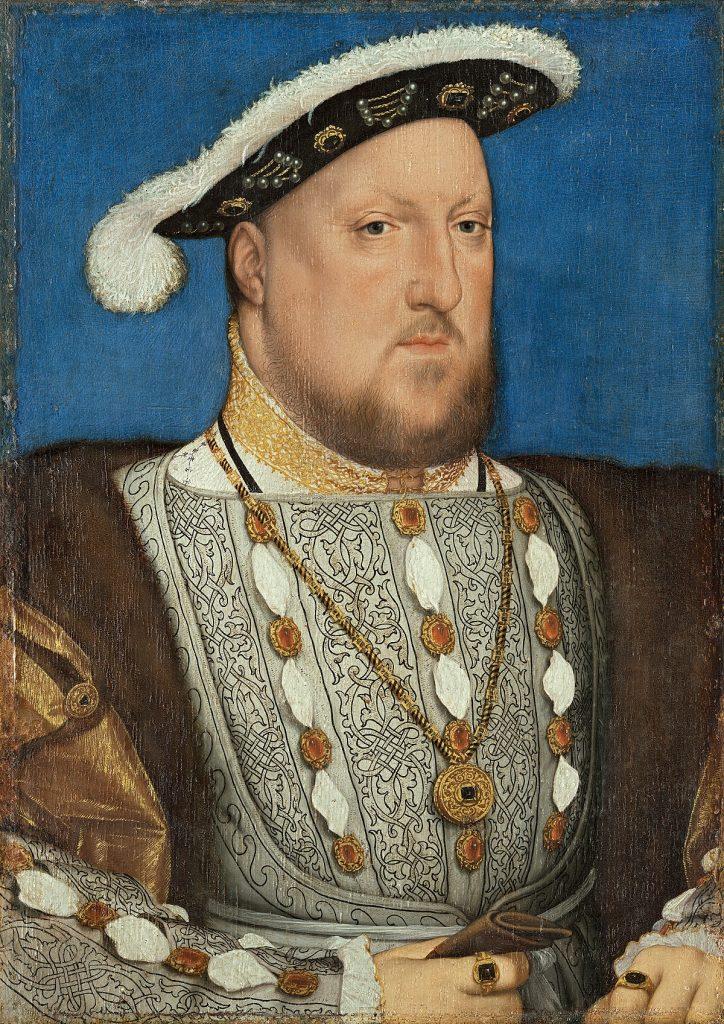 Henry VIII and Elizabeth serve as the anchors to the Tudor narrative: the former the wily and hedonistic politician who greatly expanded England’s power and broke with the Pope over his quest for a woman who would give him a male heir; the latter his steely daughter who skillfully challenged the gender expectations of her time, famously declaring, “I know I have the body but of a weak and feeble woman; but I have the heart and stomach of a king, and of a king of England too.”

The exhibition reveals how carefully they crafted images of themselves as benevolent leaders and personifications of a newly ascendant England. Their reigns took place against the backdrop of European power plays and continuing wars of religion. These form the subtext for many of the works on display. Portraits, both full-length and miniature, were exchanged to cement diplomatic ties and advance dynastic marriage proposals. Jeweled clothing and books were marks of royal favor. Medallions were minted and distributed to spread the monarchs’ images throughout England and the world. One of the most fascinating sections of the exhibition includes portraits of figures who rose high in the Tudor realm before falling into disfavor or disgrace. The fate of many of these portrait subjects suggests how dangerous it was to be close to power. 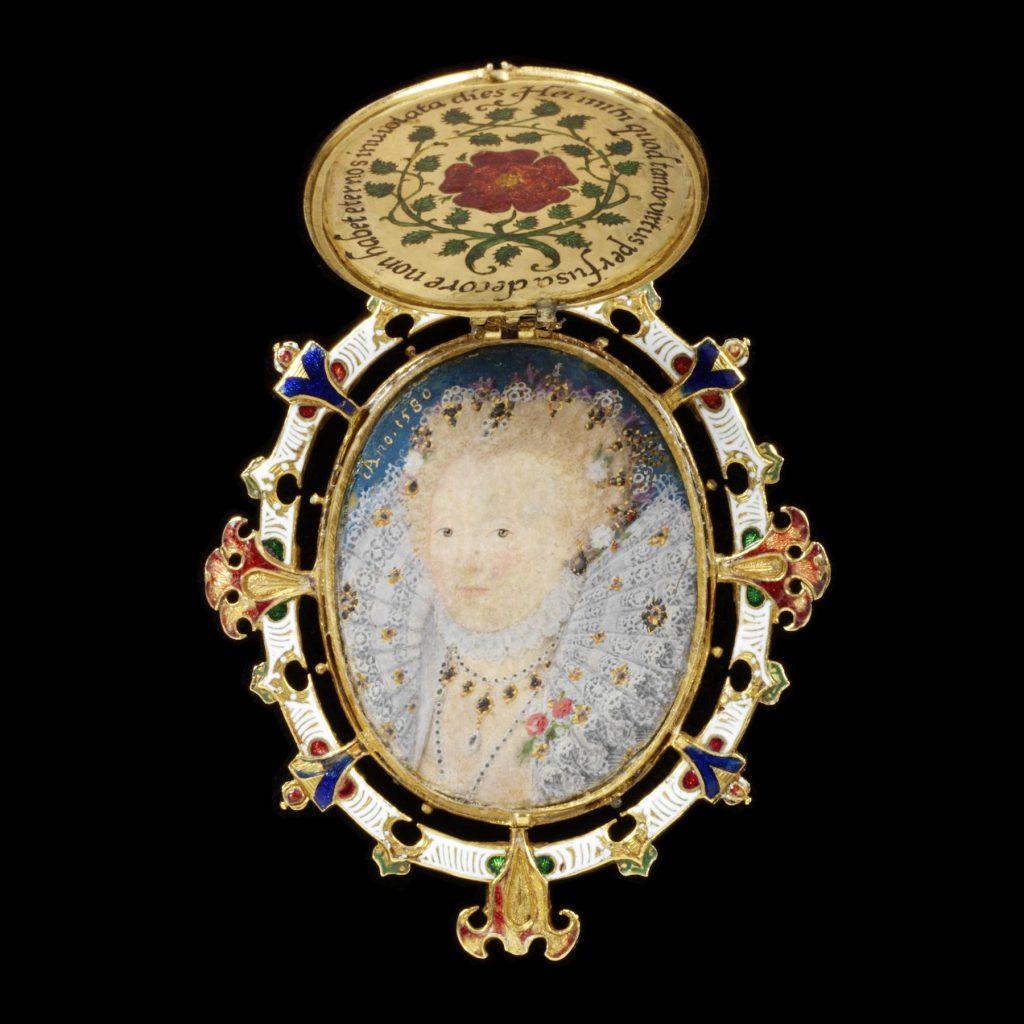 Included here is Holbein’s magnificent portrait of Thomas More, the patron who introduced the Holbein to the Tudor court and remains revered as a brilliant intellectual and portrait of courage in the face of abusive power. Swathed in fur and velvet and slung with a gold chain that denotes his allegiance to the King, More’s eyes shine with intelligence and a melancholy that seem to foresee his future. This famous work was painted eight years before More was beheaded for opposing Henry’s marriage to Anne Boleyn.

Henry’s second bride, who would share More’s fate a year later, appears here in a delicate line drawing by Holbein. Apparently, she didn’t last long enough for a formal portrait.

A beautiful polychrome terracotta bust by Florentine sculptor Pietro Torrigiano, who also worked on Henry VIII’s aborted tomb project, depicts John Fisher, an influential cleric in the days of Henry VII. His rectitude, suggested in this remarkably life-like sculpture, was his undoing. He was beheaded for his refusal to recognize Henry VIII as the Supreme Head of the Church of England. 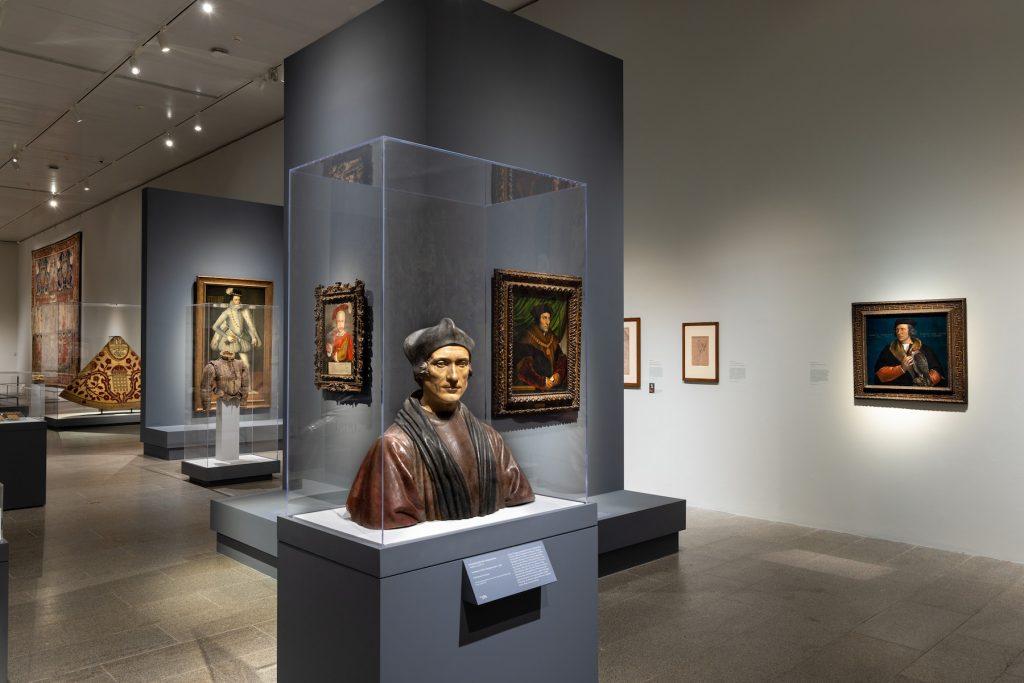 Other portraits offer reminders that even absolute power could not elude the vicissitudes of life. One particularly affecting painting depicts Edward, Henry’s long-awaited heir, as a child. Outfitted in the trappings of royalty that he would only briefly enjoy, he is here every bit the plump-cheeked toddler.

There are also luckier portrait subjects. These include Robert Dudley, Earl of Leicester, who was acknowledged as a favorite of Elizabeth, although it is still unknown whether he enjoyed the Virgin Queen’s intimate favors. What is clear is that Elizabeth was taken with a certain vision of male beauty. Dudley is depicted in various portraits here with a slim, dashing silhouette that is light years away from the aggressive bearing and overt sexuality of her swaggering father.

One whole room is devoted to portraits of Elizabeth I. This long-reigning monarch curated her image as meticulously as any modern-day influencer. Though crafted by different painters, her full-length portraits have a formulaic similarity. Elizabeth’s pale and inscrutable face is framed by her stiff ruff and her body is imprisoned in a lavish sculptural hoop dress that seems to deny the existence of a sensuous real body beneath. These portraits suggest the delicate balance that Elizabeth had to maintain between her status as woman and as an absolute monarch—like many female leaders today, she needed to project a femininity that was at once powerful and unthreatening to the male courtiers who surrounded her. 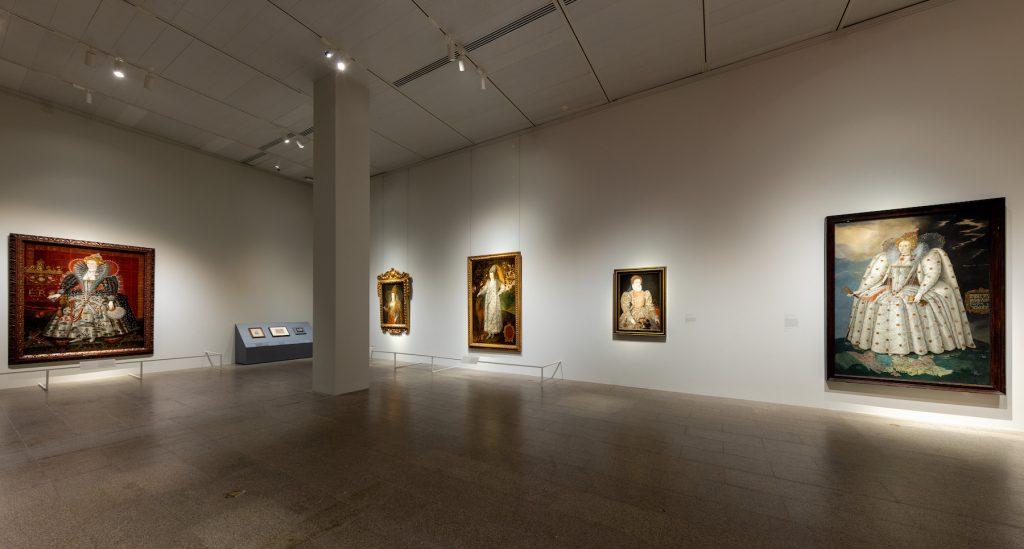 Signaling the end of the Tudor line, the exhibition concludes with a painting of Henry Frederick, Prince of Wales. He was the eldest son of James I, the Scottish king who succeeded the childless Queen Elizabeth and who was expected to inherit the throne from his father. Henry Frederick is depicted as an energetic young man on a hunting expedition, but sadly the young prince would die of typhoid at the age of 18—another reminder of the transience of monarchic power.

“The Tudors” says little about the life of the populace who lived with the consequences of religious wars, foreign conflicts, and taxation to support the nobility and monarchy.  But it does illuminate the often-fraught nature of life at society’s most elevated levels. Beauty, pomp, and pageantry existed side by side with the danger and insecurity stemming from the arbitrary exercise of power.

By coincidence, “The Tudors” opened shortly after the death of Elizabeth’s contemporary namesake Queen Elizabeth II. The ceremonies surrounding the royal funeral put on display the degree to which rituals and official images continue to establish the royal family’s legitimacy and respect. However, for today’s monarchy, pomp and circumstance are divorced from any real power. Instead, Elizabeth’s death has rekindled debates about whether the institution has outlived its purpose. In revisiting how significantly visual presentation amplified the Renaissance monarch’s absolute authority, “The Tudors” is a reminder of the fickleness of fate and the fact that art long outlives the power that it served.