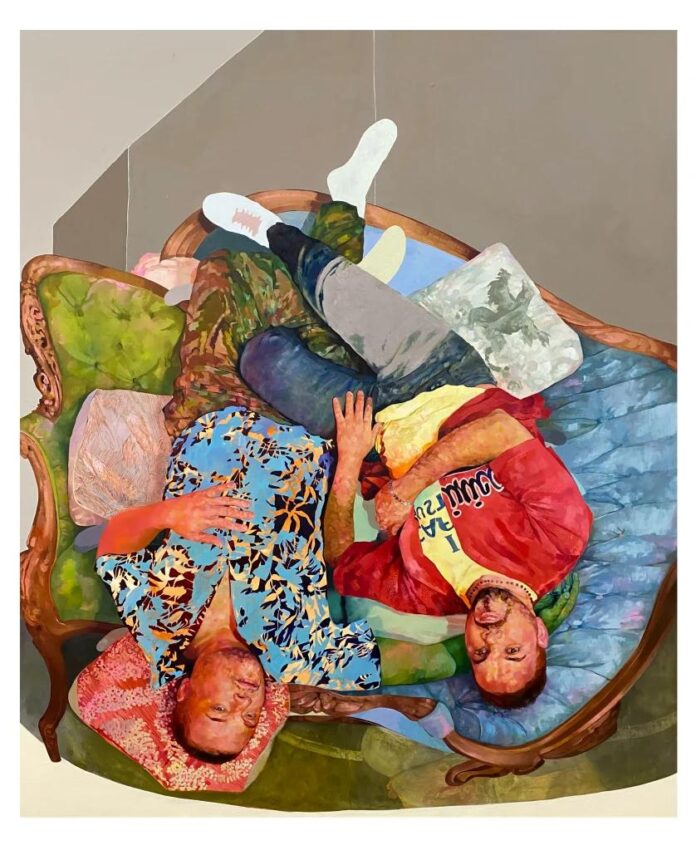 Attendees of the VIP opening of this year’s Armory Fair may have noted that there is a rather heavy emphasis on painting—it seems to dominate most of the galleries’ booths. One standout that follows this trend is in the Focus section, which is curated by Carla Acevedo-Yates, curator of contemporary art at the Museum of Contemporary Art (MCA) Chicago. There, at Chicago gallery Monique Meloche’s stand, a selection of striking canvases by David Antonio Cruz combine both soft and sharp figuration. By about 3pm on the fair’s opening day, his works, priced between $60,000 to $85,000, had nearly sold out.

“It’s a way to talk about families,” Cruz told Artnet News at the booth of the underlying subject of his paintings. He began the series during the Covid-19 lockdown, when people were forming pandemic pods as a sort of chosen-family unit. Unlike a lot of artwork that was inspired by this time, the paintings aren’t maudlin, nor do they reflect generalized feelings of anxiety.

Instead, Cruz decided to focus on the joy that comes from the sense of community found during periods of hardship. Once Covid restrictions eased, Cruz invited mainly queer people of color to come and sit for him with their chosen families, and he staged the portraits to create “a sense of a cage, a sense of a cocoon, and a sense of a womb” all at once.

Some pieces on the higher end of the price range span multiple canvases, with his subjects intimately wrapped around each other in positions that aren’t quite sexual, but aren’t strictly chaste, either.

Many of the actual people that Cruz painted were there in person at the Armory booth during the opening as well, recreating their poses with their fellow pod-members for a photo. Several of the pieces in the booth were displayed at the Institute of Contemporary Art (ICA) Boston’s recent sprawling show on figuration, “A Place For Me: Figurative Painting Now,” which closed on September 5.

Beyoncé’s Favorite Photographer Gets a New Gallery, Jerry Saltz Gets Into a Social Media Dust-Up, and More Art-World Gossip