Home News After 25 days, strike at the New School and Parsons School of... 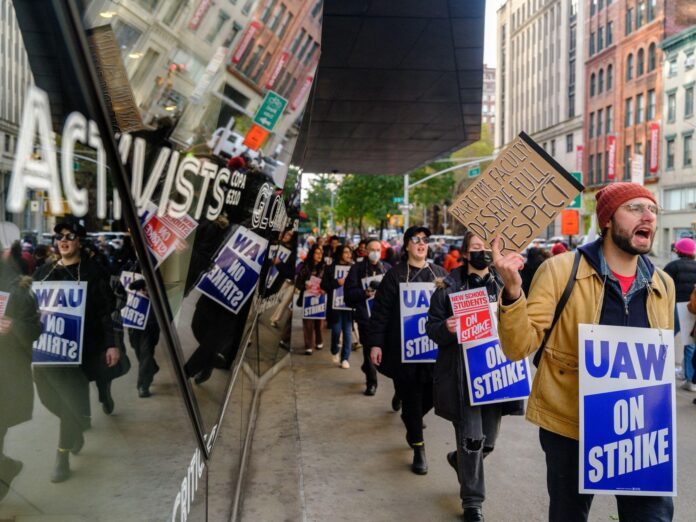 Close to 1,800 part-time faculty members at the New School and the Parsons School of Design in New York have ended their 25-day strike after a tentative collective bargaining agreement was reached between the union and the university’s administration.

The tentative agreement, which was reached late on 10 December, ended the longest part-time faculty strike to date in the United States. Virtually no classes or other events were held at the 10,000-student university over the more than three weeks the strike lasted; nearly 90% of the New School’s faculty are part-time or adjunct instructors, and most full-time instructors went on strike in solidarity.

The new five-year contract will be put to a vote this week to be ratified by the New School’s part-time faculty union, which is part of the ACT-UAW (United Auto Workers) Local 7902. The union represents over 4,000 adjunct teachers, student educators and healthcare workers at the New School and nearby New York University. The contract includes raises at various levels. For example, part-time faculty who teach a studio course with 45 “contact hours” (hours of direct interaction with students), a common course format at Parsons, will receive a 60% raise over five years. Their pay will rise from $4,300 to $6,875 per course by 2026. Additionally, the contract would expand health insurance availability to faculty who teach only one course. Part-time faculty will also achieve job security sooner and be guaranteed two or more courses per year after teaching for five years. Part-time faculty will also be provided 12 weeks paid family leave to take care of a sick family member or bond with a newly born child.

“Like with any deal, you have to make compromises along the way,” says Lee-Sean Huang, a union bargaining committee member and part-time faculty member at the Parsons School of Design. “But it is the most progress we’ve made in New School part-time faculty union history in terms of the gains we’ve made in this single contract, which is overdue since our last one was kind of frozen in time in 2018 since we had been extending it and then extended it through Covid.”

With only a week left in the semester, New School administration seemingly toyed with the idea of hiring non-union faculty members to grade students’ work in an effort to award final grades. The university’s posting seeking non-union assessors was subsequently rescinded and dismissed as an error. This was just one in a series of missteps the administration made over the course of the strike. Last week, New School provost Renée T. White released a ten-page manifesto outlining her views on the strike in which she invoked the Black intellectual and academic bell hooks, provoking swift and widespread criticism for deploying hooks’s writing out of context.

“A lot of the anger that’s persisting is the distance that the upper management has maintained, both the president and the provost, [and] to a different extent Tokumbo Shobowale, who is the executive vice president of business and operations,” Huang says. “They’ve communicated to us through either pre-recorded videos or through official statement emails rather than just talking to people in person. When people emailed them, they would get four messages back from their assistants. It made it feel like they were communicating to us through communications people and lawyers rather than communicating to us as people and as leaders of our university.”

The school also was facing a possible lawsuit from parents of students, who were threatening to withhold payment or have their children transfer to other institutions, The New York Times reported. The handling of the negotiations and strike has also led some faculty members to call for the resignation of the university president, Dwight A. McBride, and talk of holding a no-confidence vote against McBride and White.

A spokesperson for the New School, in a statement, wrote that the agreement is “a strong, fair, five-year contract that increases compensation significantly, protects healthcare benefits and ensures that part-time faculty are paid for additional work done outside the classroom to support our students”.

At a Buzzy Auction of Hollywood Memorabilia, Moses’s Staff Sold for $448,000, Beating Out the Alien Figure From ‘E.T.’