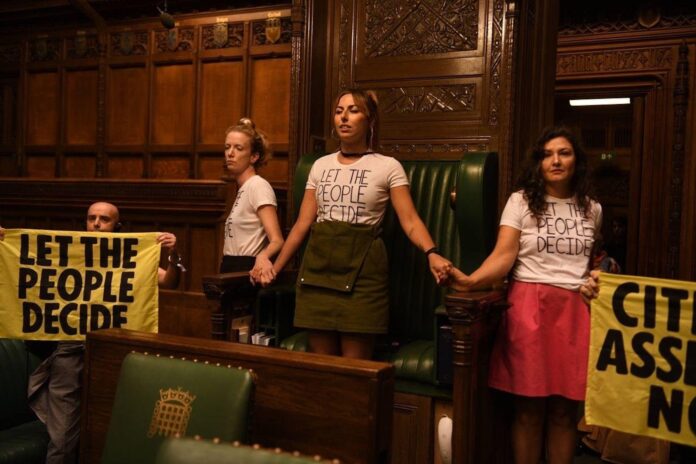 Three activists from the Extinction Rebellion environmental campaign group glued themselves together earlier today in a protest at the House of Commons in London, home to the country’s lawmakers. The trio of demonstrators glued “themselves in a chain around the Speaker’s Chair inside the Parliamentary Chamber”, says a group spokesperson in a statement.

More than 50 protestors from Extinction Rebellion descended on the House of Commons, part of the Palace of Westminster which was designated a Unesco world heritage site in 1987. Everyone inside the building had entered legally with an official tourist pass.

“Behind the Speaker’s Chair in the great hall, two people held two large banners that read ‘Citizens’ Assemblies Now’ and ‘Let The People Decide’, says the spokesperson. Outside of the building, a member of Extinction Rebellion climbed up the scaffolding around Big Ben and held another giant banner emblazoned with “Let The People Decide—Citizens’ Assemblies Now”, while two others locked themselves to the railings.

“With a new Prime Minister to be chosen next week by a fraction of the country [the Conservative party membership], and the UK suffering from a cost of living scandal meaning millions won’t be able to pay their bills this winter, faith in politics is at an all time low,” the protestors say.

“The action today is the opening act for Extinction Rebellion’s September plans, which itself will act as a launch event for a five-phase plan to bring 100,000 people onto the streets in civil resistance next spring,” they add.

The Extinction Rebellion action follows a raft of similar interventions at museums and galleries across the UK, Italy and Germany by activist groups such as Just Stop Oil and Ultima Generazione; both are funded by the Climate Emergency Fund, a Los Angeles-based organisation created by three millionaires in 2019 to support environmental activism.

Meanwhile, a review of the 9,500-strong Parliamentary Art Collection in 2020 revealed that 232 items out of 9,500 works in the collection have links to the transatlantic slave trade. Of those pieces, 189 depict 24 people who had ties to the slave trade and 40 pieces depict 14 people who were abolitionists.

Parliament also holds a number of other important collections such as the Historic Furniture and Decorative Arts collection, which comprises 11,000 items of furniture, clocks, silver and ceramics across the Parliamentary Estate.