Home News An English Couple Nearly Painted Over a Mysterious Artwork on Their Bedroom... 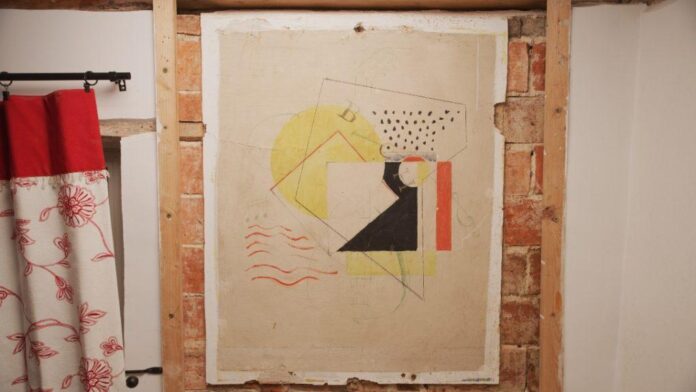 A couple on the BBC’s show were thrilled to find out that a painting on their bedroom wall is by the English abstract painter Ben Nicholson and likely to be worth up to £100,000 ($115,000).

The artwork in question is composed of a configuration of geometric shapes with the letters spelling the name Bach and a vaguely discernible music note.

When Ian and Julie moved into Red Stream Cottage in Surrey 20 years ago they decided to redecorate by painting over the mysterious artwork. These plans were put on hold when they heard from a neighbor that the work was rumored by the previous owners to be by Nicholson.

“As an abstract painter, that’s just the sort of thing he might have come up with,” said art dealer Philip Mould, who teams up with Fiona Bruce, the host of the popular show, to investigate the stories behind unknown works of art. To prove his hunch, Mould and Bruce set off on a trail across the U.K. to investigate the work’s authenticity.

A major British Modernist known for his avant-garde compositions, Nicholson was shown to have at one time stayed at the house as a guest of the amateur artist Fred Murray, who lived there at the time.

The painting has now been identified as the product of a one-off collaboration between Nicholson and Murray. Its estimated worth is between £50,000 and £100,000.

With plans to build an extension on the house, the couple have chosen to have the work removed by specialists. The highly risky operation was deemed necessary to save the work from wear and damage.

The work has now been safely removed and is undergoing restoration before going to auction.