Home News Are you being ‘shadowbanned’? Instagram announces new transparency tools that reveal if... 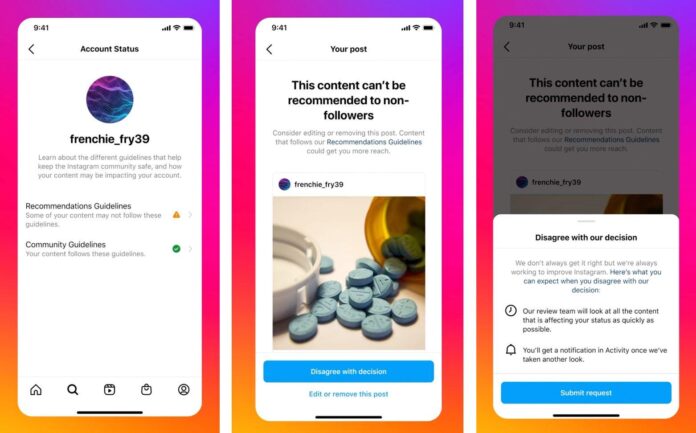 In a somewhat clumsy video last week, the head of Instagram Adam Mosseri announced “new transparency tools” that purport to give users a peek into what is commonly known as the “shadowban” for the first time. Different from violation notifications, these new tools show which of your posts are going against the “Recommendation Guidelines,” or the guidelines Instagram uses to decide which posts can be promoted and searchable. These criteria are at once revealing and vague, including subjective phrasing like “we try not to recommend content that may be sexually suggestive”, but for many who have been suppressed under obscure “shadowban” measures, this announcement brings cautious relief.

As Mosseri explains, the new feature is located in users’ “Account Status” page, which can be accessed under Settings. “Recommendation Guidelines” and “Community Guidelines” are now clickable sections where users can find out if any of their posts have offended and what options they have.

The tattoo artist Rebecca Habing (@land.of.sky) seems to have had a sneak peek at this new measure, possibly as part of a beta test. Habing, who uses her account to promote her business, has experienced regular censorship and post suppression over the years despite self-censoring. Noticing the change to her Account Status a few months ago, she repeatedly removed images or appealed decisions, seeing mixed results. “Over and over old and new posts show up, some which have been deleted by Instagram long ago, some which have been allowed to stay up. The same posts that get cleared from the list one week show up on the list again the following week,” she tells The Art Newspaper. When deleting or appealing worked, she saw significant changes to her account: “When my account wasn’t in the ‘recommendation’ doghouse last week, a post of mine reached 16,352 people; the post I made yesterday while in the doghouse, had a reach of 5,507.”

So, why is this happening now? It is possible that Instagram is finally listening to artists, as this announcement comes after recent outcries from the art community over post suppression. Or, another possibility is that they are rushing to implement transparency tools to comply with impending international regulations including the EU’s Digital Services Act, the UK’s Online Safety Bill, and the California AB 587 social media transparency law. These laws require that companies divulge their content moderation practices, comply with their own terms of service, and allow users to appeal decisions. Accordingly, as Instagram has published their Recommendation Guidelines, they must allow users to appeal or be advised of any decisions relating to them.

While the appeals process is still murky, it appears that these new transparency tools are a gesture in the right direction. Habing and other artists who have received the update (not everyone has so far) are of two minds: they are glad to see some transparency, but disappointed by the obvious subjectivity at play. It seems clear that artists who suspected “shadowbanning” now have proof. As Habing states, “I’m not at all opposed to them being on the lookout for seriously inappropriate content; they’re just terrible at it.”