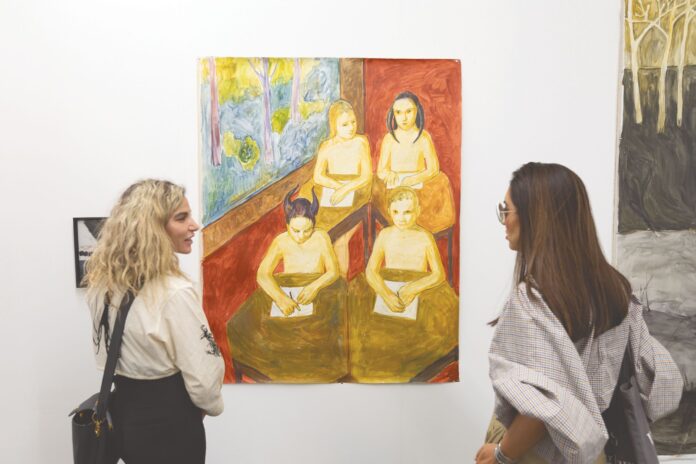 In recent years, words commonly used to describe art fairs include “outdated”, “draining” and “environmentally unsustainable”—“empathetic” is not one of them. But in the wake of Russia’s invasion of Ukraine, a number of the besieged nation’s galleries have turned to fairs as a lifeline to keep sales happening and a platform for their artists at a time when they need it most.

At Liste—an art fair focusing on young galleries and emerging artists that runs alongside Art Basel—two Kyiv galleries have been specially invited by the fair’s organisers to present works, neither of which have shown at the fair before. The Naked Room, founded in 2018, is exhibiting three artists from Ukraine. Since March, the gallery’s physical space has been closed and business has been on complete hold. The fair—the gallery’s first since the outbreak of the war—marks its return to selling as its staff acclimatise to new, itinerant lives on the international art circuit, unable to return home.

“Last year our collector base was perhaps 10% international buyers—that number is now 100%,” says gallery co-founder Maria Lanko, who also co-curated the Ukrainian Pavilion at this year’s Venice Biennale. “We are entirely reliant on them now and showing at an event like Liste is vital to expanding our reach and staying afloat.” Lanko explains that the gallery unsuccessfully applied two years ago to Liste. In April they were contacted by the fair’s organisers and invited as guests; the gallery will not pay a stand fee. She adds that the gallery has now switched to a pop-up model, transferring its programme to art fairs. With no end to the war in sight, repositioning its business model is of key concern, Lanko says.

The gallery has now also been invited to exhibit at Vienna Contemporary (8-11 September) for the first time, and in between will be hosted by a number of European institutions to stage non-selling shows, something that Lanko says “is equally vital for visibility, which inevitably boosts sales”. Much of the work they are showing was shipped from Kyiv to Lviv as the Ukrainian capital came under attack, and had been safely stored by a museum. Works on the stand range from €1,200 to €6,000 and include styrofoam and concrete sculptures by Katya Buchatska, who is currently in Kyiv. While Lanko will remain out of the country after Liste closes, her male colleague working on the stand will return back home, having been granted special permission from the Ukrainian culture ministry to leave the country for two weeks. Men are expected by and large to stay back to help with the war effort.

Voloshyn Gallery, whose Kyiv space is now closed, has brought a more austere and harrowing stand, also featuring three artists. Almost all of the works on the stand were created in the past few months and are easily read as responses to the war: a large fabric and painting installation by Lesia Khomenko that depicts a Russian soldier is being offered for €27,000, and black-and-white photographs by Nikita Kadan, each for €5,000, show images of Soviet Modernist architecture superimposed onto Ukrainian fields.

In March, Kadan sheltered with a number of Voloshyn’s staff in the gallery itself as Kyiv was shelled by Russian forces. Among them is Anna Kopylova, who is working at the stand. She says that the gallery is leaning “almost entirely” on being invited to fairs to sustain business across a busy summer. These will include the Armory Show (9-11 September) in New York and Art Athina (16-19 September) in the Greek capital. Where they will go for the rest of the year is unsure.

“We don’t know what will be in a month,” Kopylova says. “We can plan only for a few weeks now.” Before Liste, Voloshyn already participated in Nada New York and Material in Mexico City; both fairs took place in May and waived the stand fee for the Ukrainian gallery.

“Eastern European galleries contacted me just a few days after the war began,” says Joanna Kamm, the director of Liste. “From the beginning, we discussed how we could support Ukraine. This resulted in many different projects besides inviting the two Kyiv galleries to participate in the fair, including a call for donations and a Ukrainian-curated film programme The Sky is Getting Closer and some stand presentations extended to include Ukrainian artists.” Kamm says she has not yet considered whether Liste will host Ukrainian galleries for a second year as “she hopes for the war to
end soon”.

Around Basel, a number of other initiatives also address and support Ukraine. At Design Miami/Basel, Marie Piselli’s TIPI: Let Light Be lamp shone with the colours of Ukraine’s flag. Nearby, the Antwerp gallery Faina, which is owned and largely staffed by Ukrainians, is also using its solo stand by the artist Victoria Yakusha—which includes a tapestry work created in the Carparthian Mountains and priced at €20,000—to broach the war. While the gallery is able to conduct business in Antwerp, it cannot plan ahead as all its artists are Ukrainian, “making business highly complicated”, says Tatiana Franchuk, the director of Faina.

Art Basel itself has partnered with a number of institutions in Basel, including the Beyeler Foundation, to stage a public art project by Ukrainian artist Boris Mikhailov, showing his latest photographic series Temptation of Death (2017-19) across the city. The fair has also made a donation of SFr 110,000 (€105,500) to various charities providing aid to Ukraine. At a press conference on Tuesday, Marc Spiegler, the global director of Art Basel, did not shy away from the gravity of the situation: “The fair is opening in the context of a brutal invasion, the first land war in Europe in 30 years,” he said. He added that since the start of the pandemic he believes “the art world has become more open to perspectives long marginalised by system prejudices and socio-economic inequality and academic inertia. And importantly, this shift is not just happening in culture, but also in the market.”

But others question why the art market’s growing generosity is reserved for select causes. The response to Ukraine has proven that the art market can act in unselfish ways, and with speed. “The response to Ukraine is indicative of what I term a hierarchy of empathy, which focuses attention on white Europeans above all others,” says the South African artist Adam Broomberg. A vocal advocate for Palestinian rights, he says the art market is “terrified of mentioning Palestine and will never award success to those who are critical of Israel”.

The artist, who in March launched the sale Solidarity Prints for Ukraine that raised more than €200,000 to non-governmental organisations, adds that Ukraine is not the only country embroiled in conflict that could benefit from sustained art world support.

If you miss it in Venice, see it in Margate: Sonia Boyce’s Golden Lion exhibition tours to two UK venues