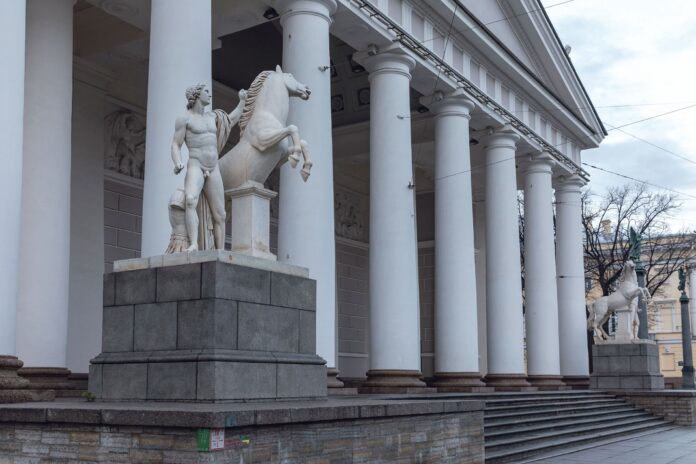 The new St Petersburg contemporary art fair 1703—named for the year of the Russian imperial capital’s founding and sponsored by Gazprom, the Kremlin-controlled energy giant—launches today (until 19 June), overlapping with Art Basel, previously a destination for well-connected Russian collectors.

Although public expressions of dissent have been crushed in Russia, with artists among those facing years in prison for opposing the war, officially referred to as a “special military operation”, the new fair caused controversy on the art scene when it was announced. In an article posted online in April titled “No to participating in the 1703 art fair!”, St Petersburg culture writer Pavel Gerasimenko speculated on the motivations behind the fair. “It is absolutely obvious that the planned event is from the category of ideological support for the ‘special military operation’,” he wrote. “It is necessary to demonstrate the activity of cultural life, create an impression of normality and divert attention from the war waged by Russia in Ukraine.”

Tanya Pinchuk, the director of St Petersburg’s Street Art Museum, tells The Art Newspaper that “this fair is an ornament of the cannibalistic regime, an entertainment for executioners”. Her museum has suspended its projects due to the invasion. Pinchuk is in Basel this week promoting an anti-war exhibition at Voskhod Gallery by Lisbon-based Russian street artist Kuril Chto.

Sixteen galleries from Moscow and St Petersburg and one from Nizhny Novgorod, a city also known for its contemporary art, are participating in the fair at St Petersburg’s Manege Central Exhibition Hall. A spokesperson for the fair says that “due to the circumstances, the fair is now one of the few venues where Russian artists can present their work”. Boris Piotrovsky, St Petersburg’s vice governor in charge of culture and tourism—and son of State Hermitage Museum director Mikhail Piotrovsky—says the fair “confirms our status as a modern cultural capital”.

Marina Gisich, who is participating in the fair with her St Petersburg gallery and is also curating a section devoted to private collections, says 1703 has been in the works since 2021. With Cosmoscow the only other large international art fair in Russia, she says, “the need for it has been clear for a very long time”. She adds: “Today, all Russian art market professionals are in a difficult situation, but we must nonetheless continue our work and support each other.”

Some artists were nearly shown at 1703 against their will. Dmitry Khankin, the co-founder of Triumph Gallery, located near the Kremlin and popular with some individuals in the upper echelons of power, said in comments distributed by the fair that works by video art collective AES+F would be shown at 1703. Members of the AES+F collective, which broke all ties with Russian state institutions after the invasion of Ukraine, tell The Art Newspaper: “When we saw that statement by Khankin we informed Triumph that we will not be participating under any circumstances.”