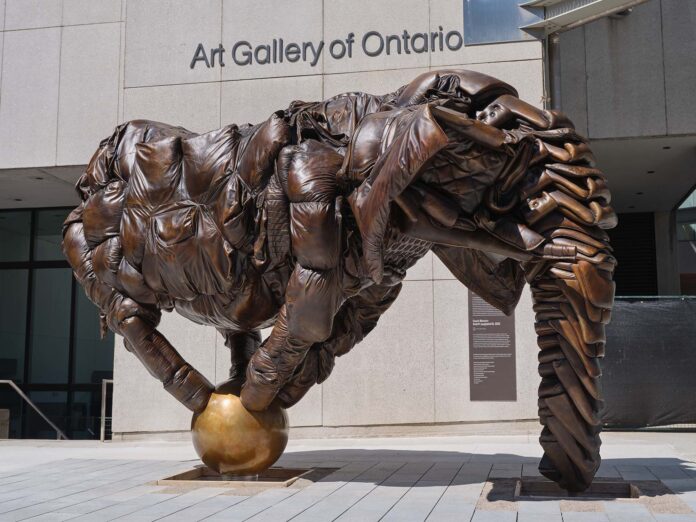 There’s an elephant—a bronze elephant no less—on view at the Art Gallery of Ontario (AGO), but it’s not in the room, or in any room of the downtown Toronto showplace. Rather it’s at the corner of Dundas and McCaul streets at the gallery’s east end, a spot once occupied by Henry Moore’s Large Two Forms (1966-69), which was relocated to a park behind the gallery several years ago.

The elephant, titled Couch Monster: Sadzěʔ yaaghęhch’ill (my heart is ripping) (2022), is by Brian Jungen, the renowned British Columbia-based artist of European and Indigenous heritage. It is his first large-scale bronze sculpture, all 11,000 pounds of it, what the AGO calls, “a poetic tribute to the plight of creatures in captivity”. Some 5.5m long and 4m high, it was cast at a foundry in Walla Walla, Washington, reportedly one of only two in the world capable of such an enormous undertaking.

Jungen is known for his use of everyday materials to make art, including sneakers, golf bags and lawn chairs. It was after seeing heaps of discarded furniture on Toronto sidewalks, much of it leather, that he opted to use bronze treated to look like animal skin and which will come to resemble it even more over time. It was also in homage to Moore, one of Jungen’s influences.

Couch Monster was a while in coming, though. “It’s been a real long road to get here,” Jungen says. He created a full-size prototype using second-hand furniture in his studio, which was then sent to the foundry. There were further complications due to Covid-19, as Jungen was unable to cross the border and had to communicate with the foundry by phone. “It’s been five years,” he adds. “I decided to let my hair grow.” That was apparent.

The piece was inspired by the sad ending of a legendary elephant named Jumbo, an oversized star of the P.T. Barnum circus, killed by a freight train while being led across the tracks in St Thomas, Ontario, in 1885. His story is said to have inspired Walt Disney’s animated classic Dumbo.

As with much public art, people are encouraged to touch Couch Monster. The fact that Jungen uses what he calls “stuff they are familiar with” is further incentive. Amazingly, it even feels like leather. “I don’t really want people to climb it,” he adds, “but I think that might happen.” Or, as one sponsor who was on hand for the launch aptly put it, “You can’t stop kids from doing stupid things.”

AGO director and chief executive Stephan Jost, said at the launch event, “I want it to be both accessible and complex.” “The public owns it,” he added, noting that the Moore sculpture was “almost never tagged”.

On the subject of cost, no figures were disclosed, though Jost hinted that it was a very expensive proposition, with significant government funding and even the Henry Moore Foundation kicking in support.

The elephant’s tusks have been shorn—Jungen apparently felt they weren’t in keeping with a circus animal—but its trunk is very much in evidence, apparently to the delight of Jost’s daughter. “To her, this is about touching the trunk and getting good luck,” he said.