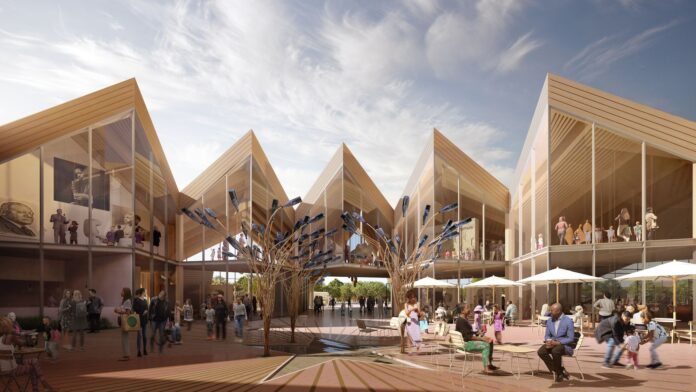 As the US observed the national Juneteenth holiday for the second time on Sunday (19 June), officials in Fort Worth, Texas—a state where it has been a holiday since 1980—unveiled plans and a timeline for the realisation of a National Juneteenth Museum. Work on the 50,000 sq. ft building, designed by Danish architecture firm Bjarke Ingels Group (BIG) and projected to cost around $70m, is scheduled to begin by the end of the year and wrap up in time for an opening around Juneteenth 2024.

The Juneteenth holiday marks the anniversary of the events of 19 June 1865—more than two years after Abraham Lincoln issued the Emancipation Proclamation—when Gordon Grander, a general in the Union Army, announced General Order No. 3 in Gavelston, Texas, thereby freeing the quarter of a million enslaved people estimated to have been living in the state at the time. In doing so, Texas became the final state to actually abolish slavery.

Work on a new museum to commemorate that day was first announced in October of last year and, like the Juneteenth holiday itself, owes much of its momentum to Fort Worth activist and 2022 Nobel Peace Prize nominee Opal Lee, known affectionately as the “grandmother of Juneteenth”.

“To have lived long enough to see my walking and talking make an impact is one thing, but to know that a state-of-the-art museum that will house the actual pen that President Biden used to sign the bill, and many other exhibits, is coming to pass as well—I could do my holy dance again,” Lee said at the time.

The forthcoming museum will rise on the grounds that have long housed Lee’s Fort Worth Juneteenth Museum on the city’s Southside. The existing museum building will be demolished to make way for the new building. Lee’s granddaughter, Dione Sims, will be the founding executive director of the new museum. Douglass Alligood, the BIG partner in charge of the museum, said he sees the project as a small step toward restoring a neighbourhood long targeted by discriminatory urban planning.

“Our engagement with Ms. Opal Lee and members of the community, to really understand their needs, is what informed a lot of the design principles,” Alligood said in a statement. “As a Black architect, this project is one of the most rewarding experiences of my career.”

The timber-based design for the building will rise from a rectangular footprint, with an array of gabled rooftops all converging toward a central, open-air courtyard. The structure will house spaces for exhibitions and educational programming, a food hall featuring Black chefs, a recording studio for visitors to share their stories, a theatre and a business incubator. The structure will be the centrepiece of a mixed use development that will also involve the construction of new housing.

“The National Juneteenth Museum will be at the core of a vibrant center to the long neglected Historic Southside,” Alligood added in a statement. “Our hope is that this building will become a gateway to the Historic Southside community of Fort Worth while serving as a national and global destination. Juneteenth is not only American history—it is world history.”

Donald Trump’s Surreal Line of NFT Portraits Sold Out Within a Day—and Are Now Trading for as Much as $44,000