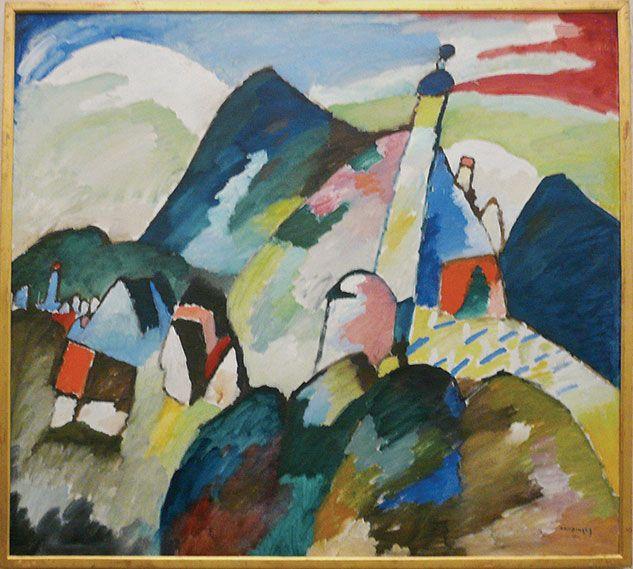 In a surprise volte face, the Dutch Restitutions Commission has reversed a recent ruling regarding one of Kandinsky’s most important works, deciding instead that the work should be returned to the heirs of the Jewish collector who owned it before the Second World War.

The commission, a national panel which assesses claims linked to Nazi-looted art, agreed that View of Murnau with Church (1910) should be handed over to the family of Johanna Margarethe Stern-Lippmann, a Jewish collector who died at Auschwitz in 1944 and owned the painting prior to the war.

The large-scale painting has been in the possession of the Dutch city of Eindhoven since 1951, and housed at the local art museum, the Van Abbemuseum. The museum acquired it from the Jewish dealer Karl Legat, who worked with Myrtil Frank, the husband of the Jewish photographer Meta Ehrlich. Both dealers collaborated with the Mühlmann Agency, which functioned as a clearing house for art expropriated in German-occupied Holland (their families were subsequently protected from deportation).

The group of 12 heirs fought for years to reclaim the Kandinsky painting and finally succeeded after an appeal on a previous ruling that the Restitutions Commission issued in January 2018. The Dutch committee initially rejected the claim on the grounds that “insufficient facts and circumstances have been established on the grounds of which it can be deduced with the required degree of plausibility that the work ceased to be in the possession of Stern-Lippmann during the Nazi regime”.

The heirs disagreed and subsequently filed a civil lawsuit against Eindhoven’s City Council, requesting a reassessment of the case in light of new evidence. The restitutions committee did not initially agree to reconsider the case, stating that the heirs’ appeal “was inadmissible on the grounds of the committee’s regulations applicable at the time because it concerned a dispute in regard to which the applicants had instituted legal proceedings before a court”.

However, Eindhoven City Council agreed to reconsider the dispute, prompting the committee to reopen the case. A key finding proved to be a postcard dated 1966 in which the wife of Myrtil Frank called the disputed painting “our Kandinsky”; this convinced the committee, which stated that “it is highly plausible that the work by Kandinsky comes from the collection of Margarethe Stern-Lippmann and that it is sufficiently plausible that she lost possession of the work involuntarily as a result of circumstances directly related to the Nazi regime”.

The committee also confirmed that Eindhoven City Council “waives the right to invoke good faith in regard to the provenance of the work when purchasing it”.

Numerous Jewish families fled to the Netherlands in an attempt to escape Nazi Germany, but from 1940, under German occupation, many works were abandoned, confiscated, or sold under duress in the country. Crucially in April 2021, after the recommendations of the Kohnstamm Committee, which was set up to investigate and evaluate the Dutch restitution policy, the Dutch government adopted a new assessment framework for restitution claims.

The Kohnstamm report examines the drawbacks of the “balancing interests” method, stresses the importance of conducting systematic provenance research in the Dutch state collections and proposes that the government “should ‘under certain circumstances’ refrain from invoking an acquisition in good faith”.

The restitution of View of Murnau with Church is the latest of a series of rulings in the Netherlands in favour of Jewish families seeking to reclaim possession. In 2018, the Commission ruled that Kandinsky’s Painting with Houses (1909) should remain in the Stedelijk Museum in Amsterdam due to its “significant place” in the museum collection since 1940. After a protracted legal fight, the work was returned to the family of the original owner, the collector Irma Klein, in March 2022.

Mega-Gallery Hauser & Wirth Is Getting Into the Auction Business—Temporarily, and for a Good Cause