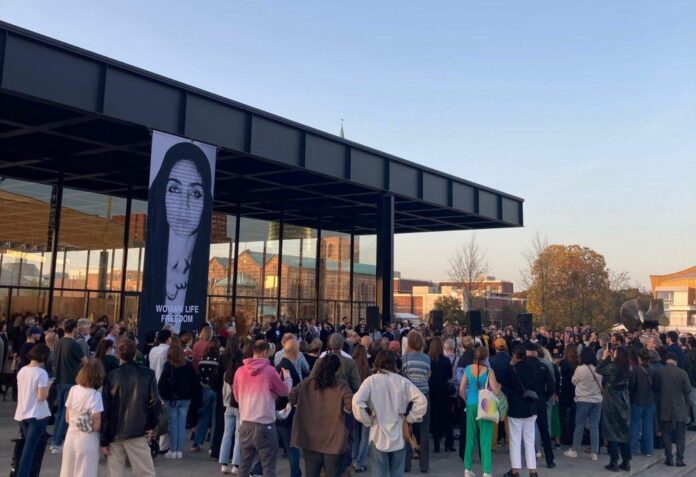 Manifesta 16 Names Location – The next edition of Manifesta will take place in the Ruhr region of Germany in 2026. Manifesta 15, taking place in 2024, will be held in Barcelona. Ukraine has sent a letter of intent to host the roving European biennial in 2028. ()

Banksy’s Short Video in Ukraine – The street artist released a short video showing himself making work in Horenka, Ukraine, as well as personal accounts from passerby. Earlier this week, he revealed seven new street pieces in the conflict zone. ()

Iranian Artists vs. Shirin Neshat – The installation of a banner by Iranian artist Shirin Neshat at the Neue Nationalgalerie in Berlin, meant as a show of support for the protests in the country, has sparked debate online. One critic said the work, which shows a woman in a hijab, is “completely against the images that women are fighting for.” In a phone call with Hyperallergic, Neshat said the publication was “no different than the Islamic Republic of Iran” and was engaging in “cancel culture.” ()

An Art Historian on the Just Stop Oil Protests – So far, museum climate protesters have only targeted works behind protective glass. Historian and activist Lucy Whelan claims this is just adding to the problem. “So long as you keep on throwing soup at protective glass around great art works, you will just keep proving again and again, that ‘the system’ will save us,” she writes. “But eventually it won’t.” (Guardian)

New Art Space Lands in a Former Dunkin’ Donuts – Artists Rachel Rossin, Kyle Clairmont Jacques, and Moira Spahić have opened an art space in the Financial District, cheekily naming it Dunkunsthalle. With a three-year lease, the trio plans to employ a “strange and novel funding structure” based on support from the neighborhood community, donors, and the art world at large. (ARTnews)

Lisa Brice Joins Thaddaeus Ropac – The South Africa-born, London-based painter, whose market has recently been on a tear, is joining the stable at Thaddaeus Ropac. Her first solo exhibition will be held at the gallery’s Marais outpost in Paris in October 2023. ()

Li Hei Di Joins Kohn Gallery – The London-based Chinese artist, who makes abstract paintings and surreal sculptures, will have her first solo show at the L.A. gallery in 2023. (Press release)

Art Comes to Psychiatric Wards – A nonprofit called Hospital Rooms is commissioning artists, including Anish Kapoor and Tschabalala Self, to help brighten up the U.K.’s psychiatric hospitals. Invited artists may also often run workshops with patients as a part of the program. (New York Times)