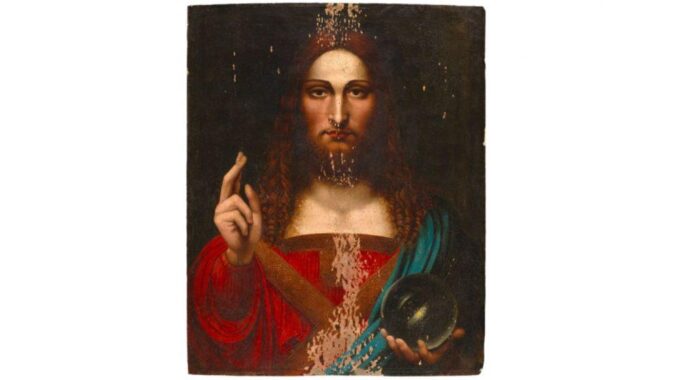 National Portrait Gallery Edges Closer to Keeping Reynolds Portrait – The London museum has raised nearly half of the £50 million needed to block an important Joshua Reynolds painting, from leaving the country after the government placed a temporary export bar on the painting in order to buy the museum time to acquire it. (The Art Newspaper)

High Line Plinth Commission Winner Revealed – Swiss conceptual artist Pamela Rosenkranz will make an anthropomorphic tree for the third commission on the High Line Plinth. The 25-foot-tall pink sculpture has been modeled from digitally merging scans of trees with human circulatory systems and muscles. It will be inaugurated in April. (New York Times)

Anonymous Copy of Leonardo’s Sells for Miraculous Money – A battered late copy of Leonardo da Vinci’s stunned everyone when it sold at an online Old Masters sale by Christie’s Paris on November 28. Described as “Italian school, [around] 1600, after Leonardo da Vinci,“ the battered image of Christ on panel fetched €1 million ($1.1 million)—about 70 times its high estimate of €15,000. (TAN)

Dallas Museum Of Art Intruder Called Cops on Himself – Recently revealed 911 calls show that a man who broke into the Dallas Museum of Art and destroyed several objects in June went undetected until he called the cops on himself. Museum security had not realized there was an intruder in the building despite the fact that the man broke through the glass front door, prowled three floors, and shattering three Ancient Greek artifacts, a contemporary Native American artwork, and several display cases. ()

Julien Creuzet Wins French Prize at ABMB – The Paris-based Martinique-born artist was awarded the 2022 Etant donnés Prize, awarded by the French Professional Committee of Art Galleries and Villa Albertine. Creuzet has works on view at Art Basel at both High Art and Andrew Kreps. (TAN)

Curators of Buro Stedelijk Announced – Rita Ouédraogo and Azu Nwagbogu will serve as co-curators for the newly founded art space, an initiative of the Stedelijk Museum, Rijksakademie, and De Ateliers conceived of to foster relationships between studio practices, art schools, and the museums in Amsterdam.  (Contemporary&)

New Director at the Center for Fine Arts in Brussels – Christophe Slagmuylder will take the helm of the Palais des Beaux-Arts in Brussels. He succeeds Sophie Lauwers, who died last May. (Journal des Arts)