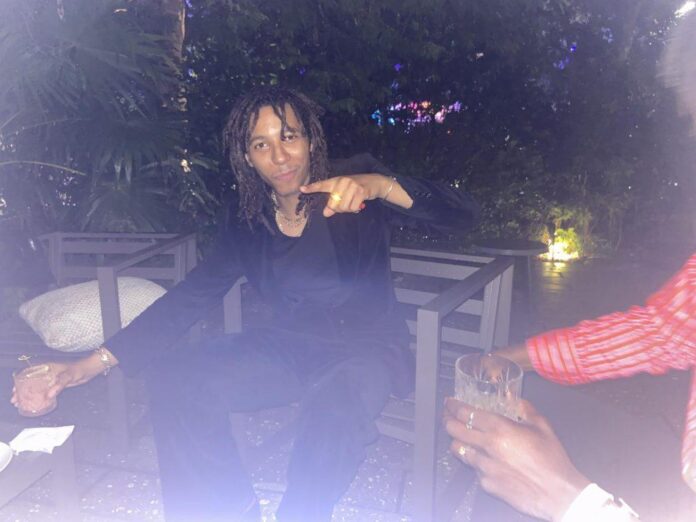 NIGHT AT THE MUSEUM WITH ALEXANDRE DIOP

I’m on my way from South Beach to meet up with Alexandre Diop, the wunderkind Viennese artist who you will know, unless you live on Mars (or your day job is in IT or something, and doesn’t involve attending art world parties, which to me is the same thing), got the coveted artist-in-residence position from the mega-collecting Rubell family—which you also should know is a talent mill that often leads to an expedited market rise (see: Kennedy Yanko and Amoako Boafo).

“If this whole thing [meaning Art Basel Miami Beach] started 30 years ago,” Vincent, who is loquacious and opinionated, regales. “It wouldn’t have lasted. But they traded out the gangsters for the high class.”

8:01 p.m.: On that note, I twirl out of Vincent’s Nissan Pathfinder and into Morgan Stanley’s private event at the museum, where Alexandre will do a public talk with Mera Rubell. But first, I get 30 minutes in the museum to myself. This feels like a huge luxury, as just that morning, Klaus Biesenbach had remarked to me that he could barely elbow his way in to see Alexandre’s work at Monday’s opening. And people generally carve out a path for that guy.

8:29 p.m.: As the talk begins, I stand next to Alexandre’s manager Amir Shariat, who seems to be chanelling Kris Jenner as he snaps photos of the event, looking over-the-moon happy, dollar signs in his eyes. Alexandre’s brother, Jean-Seban, eventually tells him to cool it a bit. Shariat, who has consistently brokered the deal for the star-making artist-in-residence slot, teases that soon, he’ll be able to tell me who gets the crown next year. Just not yet.

Alexandre takes the stage in a velvet suit and Margiela tabis, looking very cool and European. Mera introduces him with an odd sermon about love.

Mera continues. “I want to talk about love because its easy to get jaded about art. It becomes an object, and it becomes an investment. But a residency is about love.” She turns to Alexandre and stands him up, “Look at him, isn’t he gorgeous?” Alexandre smiles meekly. “Maybe we can move to some questions?” he says.

8:37 pm: Alexandre delves into his own affinity for found objects, and his habit of prowling the streets of Vienna for scraps, and alchemizing one man’s trash into pictorial canvases depicting superheroes, self-portraits of himself as a child, and homeless people. “You see the homeless people in the work, people who don’t have a roof through this material. These people are in the room with us,” he says. It gets a bit difficult to hear over chatter from the bankers who have congregated at the bar.

8:29 p.m.: Mera tells the room that Alexandre’s current exhibition displaced a Kehinde Wiley piece (the Wiley was moved to the Rubell’s new museum in Washington D.C.) Alexandre knows Kehinde well, as he was his mentor for a time in Paris through the Reiffers Art Initiatives program.

“Did you ever think that you’d create a work that could knock a Kehinde Wiley off the wall?” Mera asks Alexandre. “Yes,” he replies confidently with a smile, resulting in cheers from the audience. 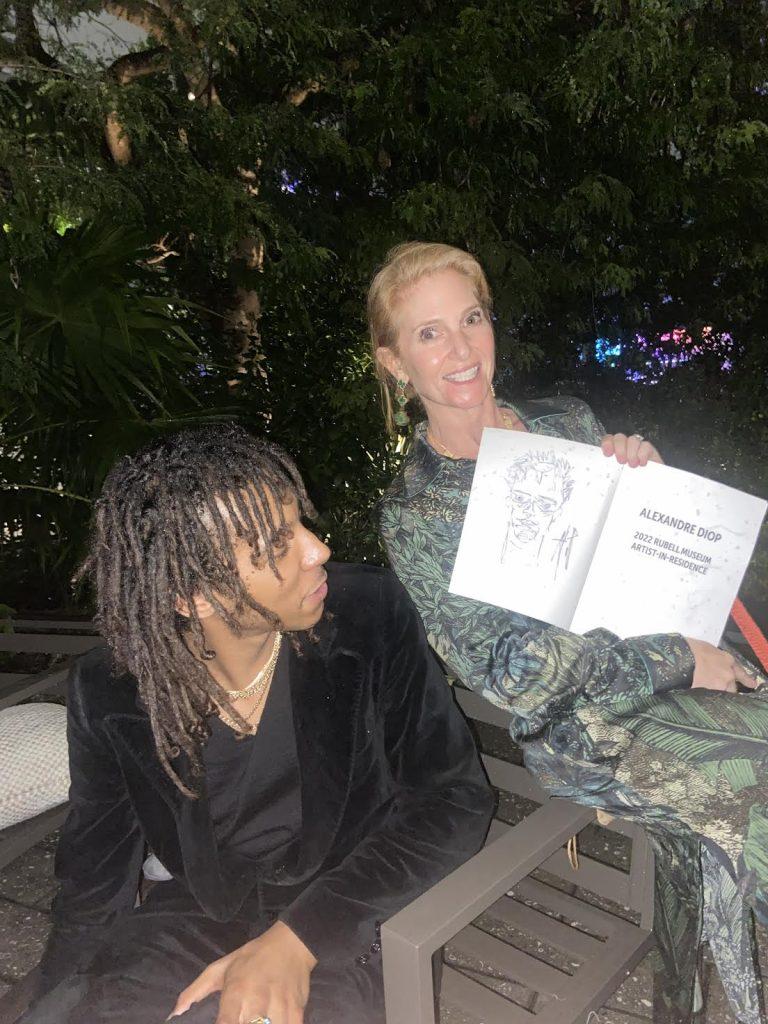 A breathless attendee with her personalized catalogue.

9:17 p.m.: Alexandre and I step out for a cigarette. He’s a very easygoing guy, unfazed by the attention, which is good because he seems to have a weighty gravitational pull. He is grateful for the opportunity, comparing the residency program to being “a musician with access to the best studio in the world,” and tells me he worked so hard during the four month-program that the Rubells even made him a bedroom inside of the museum. As we speak, museum staff that he’s become friends with come over to congratulate him and hand him his favorite drink, a syrupy, grapefruit cocktail.

9:45 p.m.: Amid all the glitz, and the bankers in the room, I wonder is he at all nervous about what a fast-and-hard market rise could do to his process? “I got some good advice from Amoako [Boafo, who is getting a solo show with Gagosian in New York next spring],” he said. “That’ll stay between us. But really he just said to be careful in life, and to keep your feet on earth. Work, and be grateful…I don’t get nervous, I won’t make the same mistakes as Amoako, thanks to his advice and the people around me. I’m not here to make money, I’m here to express myself.”

10:12 p.m.: Amir comes over to join us, and lets me in on how he courted the Rubells as clients for years before they eventually came to take his advice. Across the table, Alexandre begins making portraits with pen of various bankers who approach him with their museum catalogues. “Look at that,” remarks Amir. “Those $15 catalogues are now worth $10,000.”

10:32 p.m.: I head out of the museum, and a voice calls out to me, “Hey Annie! You get a good story?” Amazingly, Vincent is idling there, picking up partygoers from Superblue‘s party with Balmain. “Sure did, man!” Then I cruise back to Miami Beach.

During a dinner during Art Basel Miami Beach this week, I noticed a sea change in the conversation as a phone was passed around the table. The people I was with seemed perplexed by an Instagram post, and once the phone was finally passed to me, so was I.

“I am departing Downs & Ross to pursue help with my mental health and ability to extend well-being in a caring context,” a grid post from Alexander Ross, co-founder of the gallery wrote on his page, @alexross.gif. “While admiring the artists my role in the gallery has brought to acclaim over the past years, it is clear they would be better served in alternative contexts. Thank you for your dedicated support in this span.”

The table swirled with speculation about what this could mean. Had there been some sort of incident? Is he coming back?

For some context, Downs & Ross was established in New York’s Lower East Side in 2017, as the merger between Tomorrow Gallery, which was run by Tara Downs and Hester, which was run by Ross —the pair are both romantic partners and business partners. In the five years since it opened, the gallery has seen the growth of artists such as Jiang Cheng, Ivy Haldeman, and Rute Merk, clinched the estate of geometric abstraction painter Budd Hopkins, and hosted several acclaimed shows, most recently the group show “Legally Blonde” this past February, which hosted work by Catherine Mulligan and Kayode Ojo.

Eager to find out what was actually going on, I got Ross on the phone on the day that the gallery opened its booth at NADA. And to dispel any further speculation, the guy truly just needed a break.

“I’m doing well under the circumstances. It’s a dynamic, moving target,” he began. “I can say with some sense of rectitude and accountability that I’d like to reconcile the kind of intellectual accountability that I brought to the gallery with my own emotional and personal integrity. In order to do that, I thought I needed to do so from a place of stillness and pause. It was a personal decision.”

If you’re reading this from your booth in Miami, I’m sure you can relate to feeling like you’ve hit your limit. “I felt as though I wanted to recalibrate my relationship to creative and career success. It’s a really simple and healthy function of the kind of introspection I want to navigate,” Ross said.

His final action within the space was to help out with sales this week, and then he’s out. I swung by their booth at NADA to see what the others on hand had to say. “All of the artists have been incredibly supportive of the circumstances, and I think it’s the most we can hope for,” confirmed Tara Downs. “Alex has to take care of himself, and everything else sorts itself out from there.”

After what is possibly the art world’s most stressful week, I think we can all find some inspiration from his decision to put his health first. There’s a lot of talk about self-care, but rarely do we in the art world see meaningful action. From Wet Paint to Downs & Ross, I wish you well! 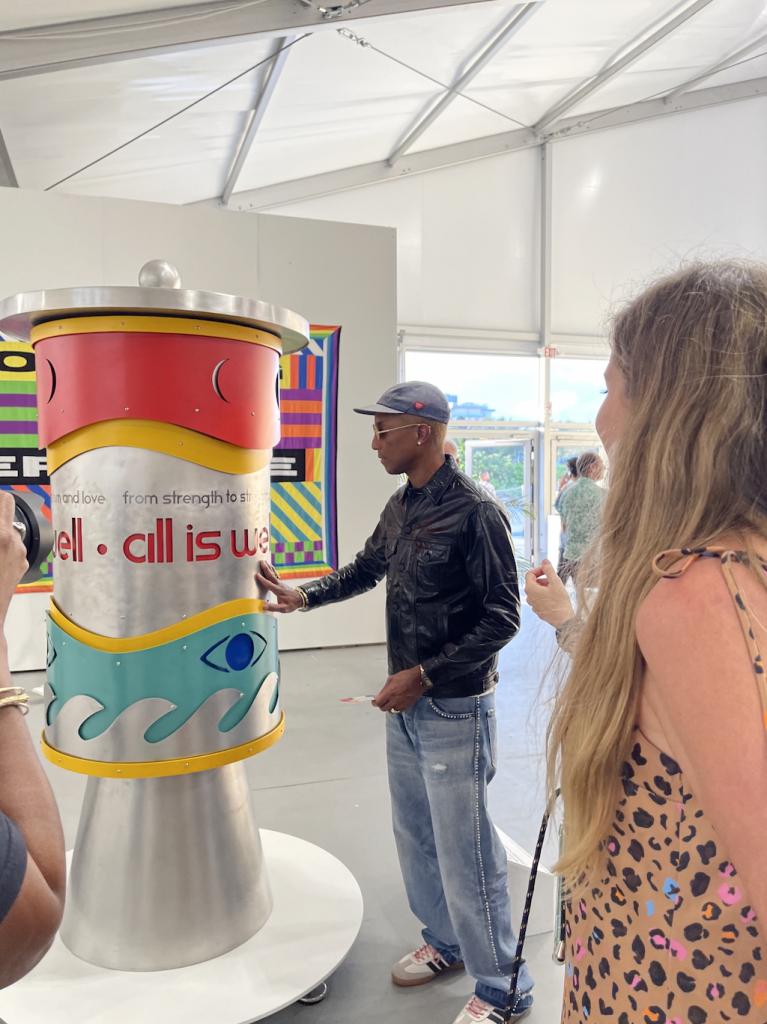 Pharrell Williams committed the cardinal sin of art fairs, AKA touching a sculpture by Amanda Keeley at Untitled Art Fair on its opening day…Anna Delvey is hosting a house (arrest) party for her fans in Miami…Anat Ebgi has taken on representation of Brooklyn-based painter Caleb Hahne Quintana…Writer Maria Vogel has started her own art advisory called Rococo, and part of its functionality will be monthly artist dinners with dishes inspired by individual artist’s work (Hiba Shahbaz-inspired roasted radishes anyone? Or some white beans by way of Melissa Joseph? I’m in!)…Morán Morán Gallery has added two artists to its roster, Oscar Tuazon and Kenny Rivero…Mariane Ibrahim is set to open an outpost in Mexico City this February, and apparently Soho House will also open their first outpost there next year as well… The Bowery Hotel is apparently in considerable financial trouble… JTT has named Marie Catalano as partner of the gallery…Marc Glimcher kicked off Pace‘s karaoke party in Miami with a rendition of , a classic…David Zwirner checked into his hotel in Miami with an almost suspiciously small amount of luggage (is he a one-suit wonder?)…

Lucien Smith threw his hat into the Balenciaga-scandal discourse, and threw some juicy shade at the brand’s fashion week party from this year along the way*** Spike Lee dropped in to the up-and-coming Cierra Britton Gallery this weekend***Josh Kushner and Karlie Kloss tied the knot, and a grab bag of celebrities and power-players like Dasha Zhukova, Derek Blasberg, Scooter Braun, Oprah Winfrey, and David Geffen were all there to celebrate***Eric André, Henry Taylor, and Joe Jonas were among the boys that Kelis’ milkshake brought to the yard at White Cube’s annual party in South Beach***Leo DiCaprio (duh), Leon Black (eek!), Martha Stewart (alright, then) and Doja Cat (heart eyes) were my favorite VIP spottings during the VIP opening day of Art Basel Miami Beach***Kylie Jenner revealed her Phillippe Parreno piece on her Instagram***Kennedy Yanko, Klaus Biesenbach, and Gaetano Pesce at the Serpentine’s annual brunch at Casa Tua***

Last week, I asked who in the art world throws the best Friendsgiving? Michelle Hellman suggested that “Rashid Johnson & Sheree Hovsepian throw the best friendsgiving hands down.” I’m inclined to believe her! Robert Dimin also added that perhaps it may be “Brigitte Mulholland, (senior director of Anton Kern) it’s kind of become a tradition.”

This week I ask: Email your response to [email protected]

Banksy’s Shredding Artwork at Auction for $25.4 Million at Sotheby’s