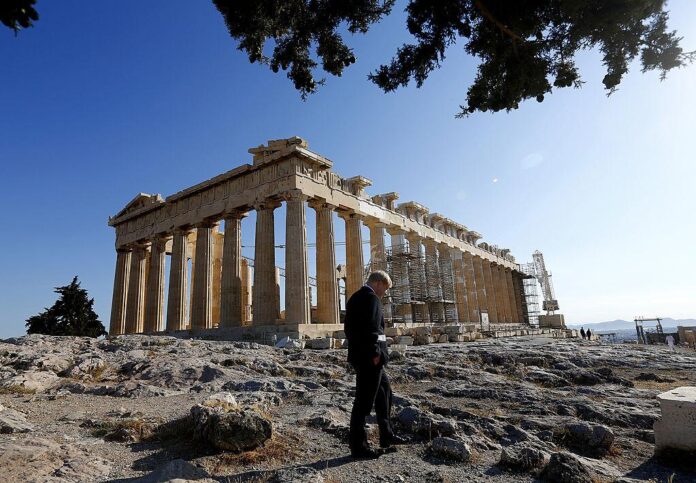 Here’s How Few Statues in Britain Are of People of Color – Only two percent of the public sculptures across the U.K.—around 2,600 works out of 13,500—commemorate people of ethnic minority backgrounds, according to a survey conducted by art education charity, Art U.K. Some 77.5 percent of the named statues are dedicated to men, while only 17 percent are dedicated to women. The project took five years and more than 500 volunteers to complete. ()

Boris Johnson Advocated for Parthenon Marbles Return, Letters Reveal – The British Prime Minister was a supporter of the repatriation of the Parthenon Marbles to Greece during the times when he was the president of the Oxford Union in 1986. In a letter to Melina Mercouri, Johnson—who was studying classics at the time—invited the actor-turned-politician—who was then the Greek culture minister—to address the union in June that year, stating that there was “absolutely no reason why” the Parthenon Marbles should not be returned immediately to Athens, “their rightful home.” In the ensuing years Johnson has changed his tune—most recently iterated last November, when he said that the matter was between the trustees at the British Museum and Greece. ()

Scrutinizing a German Collector’s Past – Julia Stoschek, the collector who owns one of the most prominent private institutions focusing on media art and sits on the boards and committees of some of the world’s most famous institutions, including MoMA PS1 and Neue Nationalgalerie in Berlin, inherited her family fortune from her great-grandfather, the German industrialist Max Brose, who was a member of the Nazi Party. Stoschek is now among a group of art patrons facing scrutiny over their families’ Nazi ties, as Artnet News reported in April last year. ()

Tristram Hunt Thinks It’s Time to Revisit U.K. Law Preventing Restitution – On the BBC Radio 4  program, the director of the Victorian and Albert museum questioned the ongoing utility of the National Heritage Act 1983, which prevents certain national museums from deaccessioning objects unless they are duplicates or damaged. Hunt questioned whether the government stance on the matter “holds water” after 40 years—adding that it is not just a question of repatriation but also that: “museums hold an awful lot of material now… some of which should be disposed and we don’t have the freedom to do that.” ()

The V&A Returns Marble Head to Turkey – The head of Eros, which had been kept at Victoria and Albert Museum in London for 90 years, has been finally reunited with its sarcophagus at the Istanbul Archaeological Museum. ()

Chinati Director to Step Down – Jenny Moore is stepping down from the role as the director of the contemporary art museum founded by Donald Judd after nine years. Moore left after the completion of a master plan created in 2017 to preserve and revamp the site. Marella Consolini, the museum’s former chief operations officer, is returning as the interim director while the board looks for Moore’s replacement globally. ()

A New Documentary Digs Into David Hammons – The artist is the subject of a new documentary directed by art writer Judd Tully and filmmaker Harold Crooks. The artist, however, makes no appearance in the feature, as the directors instead interviewed many other art world figures and collected archival footage of Hammons to create something of a of the artist’s life and his work. The film was premiered at the Sheffield Doc Fest and has no date for theatrical releases yet. ()

Just Stop Oil Activists Are at It Again – Just Stop Oil activists just won’t stop as they continue to glue themselves to important works at museums in a series of protests calling for museums to end collaborations with new oil and gas projects. Their latest stunt unfolded at the Manchester Art Gallery, where they glued themselves to the frame of a Turner painting on Friday and were subsequently arrested. Two protesters aged 21 and 24 were released from police custody this morning. It was the third in a week after a similar protest happened at Kelvingrove Art Gallery and Museum in Glasgow and the Courtauld Gallery in London. The group’s supporters also stormed the track of British Grand Prix yesterday. ()