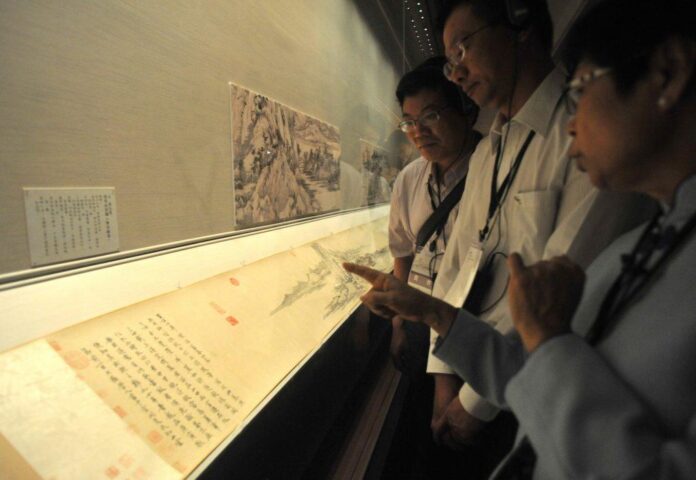 What Is the Role of Art During Wartime? – Critic Jason Farago quotes Margo Jefferson, who wrote about art in times of crisis after September 11 , 2001. You need art because “history cannot exist without the discipline of imagination.” That is why Farago went to Ukraine in July to see how the art scene was managing through several months of war. ()

The British Museum Wants to Have a ‘Parthenon Partnership’ with Greece – In an interview wit the Sunday Times, British Museum deputy director Jonathan Williams has said that the museum wants to “change the temperature of the debate” around the Parthenon Marbles, and is considering new types of partnership in the face of calls for their full return to Greece. “We need to find a way forward around cultural exchange of a level, intensity and dynamism which has not been conceived hitherto.” He ruled out, however, the proposal that the museum give away the originals and show sophisticated 3-D copies instead:  “People come to the British Museum to see the real thing, don’t they?” (Guardian)

Taiwan Palace Museum Is War-Prepping – Taiwan’s National Palace Museum is working to protect its treasures in the event of Beijing launching an attack on the nation. Last week, it conducted its first ever “wartime response exercise” centered on evacuating its artifacts. The museum has one of the world’s finest collections of Chinese imperial relics. (CNN)

Abu Ghraib Photos at Berlin Biennale Spark Protest – One of the most controversial works at this year’s Berlin Biennale is Jean-Jacques Lebel’s , a literal maze of images made from blown-up details from the famous torture photos from Abu Ghraib prison. An open letter penned by Rijin Sahakian and co-signed by 15 others denounces the inclusion, saying the biennial’s curators should have gotten permission from the subjects shown in the photos and that the Iraqi artists displayed near to it should have been consulted, instead of being forced “to navigate through a space the organizers acknowledge could ‘trigger negative or retraumatizing reactions.’” According to the letter, one curator, Ana Teixeira Pinto, resigned over the Lebel work, while Sajjad Abbas has had his artwork moved away from it, and Raed Mutar has requested his artwork be moved as well. ()

Experimenter Is Expanding from Kolkata to Mumbai – In a big move, the Indian gallery will open a second location in Mumbai in a more than 3,000-square-foot space in a 19th-century building. “This is not the same as a Cologne gallery opening a second space in Berlin. Mumbai is nearly a three-hour flight from Kolkata. Right now if we need to resolve something on the other side of the country, we can’t do it immediately,” said co-founder Priyanka Raja. The space opens in September. ()

Hitler’s “Gold” Watch Sold for $1.1 Million – Despite numerous Jewish groups condemning a sale of war memorabilia including Eva Braun’s dog’s collar, the Maryland-based auction house Alexander Historical Auctions went ahead with a sale of Nazi artifacts. The star lot, however, Adolf Hitler’s Huber watch, which dates to 1933 and was given to the murderous dictator on 44th birthday. It was sold to an anonymous bidder. (BBC)

North West Is Now Making Art for Yeezy – The daughter of Kim K. and Ye (Kanye West) is making art for her dad’s brand, according to social media posts from her mom. Her sketches show alien-like faces with fake hair and wrap around sunglasses. (The Cut)

Diego Cortez, a curator who stood at the center of Downtown New York’s vibrant art scene during the 1980s, has died