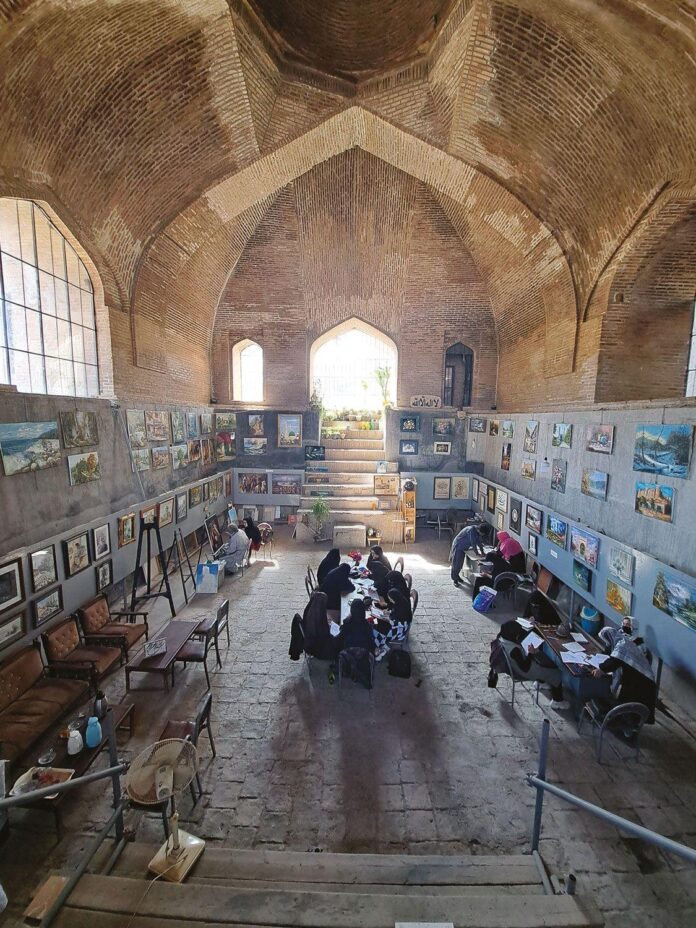 Unlike countless art galleries around Afghanistan that have closed since the Taliban took over the country in August 2021, Negar Khanah Behzad (Behzad’s Art Gallery) in the western province of Herat has consistently stayed open. The gallery’s activities shine a light on how artists are facing the challenges of living and working under the new regime.

Named after the acclaimed Herati-born miniaturist Kamal Ud-Din Behzad (15th-16th century), it is located in the Malek Cistern (13th-14th century) and opposite the famous Ikhtyaruddin Citadel. The gallery, which is also an art centre, has been run by Mohammad Ebrahim Habibi since 2009, after it was restored by Aga Khan Trust for Culture (AKTC) and handed to the Ministry of Information and Culture.

The walls of the cistern are covered with Habibi’s and his students’ works featuring mostly Afghanistan’s landscapes, calligraphy, historic sites and a handful of bazaar paintings that include depictions of people. Habibi removed most of the paintings that featured faces after the change in government. “There are those who believe images of people should not be displayed. I didn’t want to take any chances and see the paintings destroyed,” says Habibi peering from behind his canvas.

Habibi walks around the cistern and supervises his 15 or so students, which on this day are all women. He divides his six-day week equally between men and women but he has seen an increase in the number of female students taking his courses, which he ascribes to the lack of opportunities for them elsewhere.

Bahar, a 17-year-old who had hoped to study arts at university, was unable to finish her final year of education due to the new ban on girls attending schools from year six (13-year-olds) onwards. “I want to follow my passion and this is one of the only reputable and open places that I can attend,” she says. Masumeh, who is taking penmanship classes, was a schoolteacher for six years and lost her job as the demand for female teachers reduced. “I don’t want to stay at home, I want to be busy,” she says.

Aydeh has been attending the art classes for two weeks. The pregnant mother of five lives in a household of nine. To support her family she creates embroideries, which take her about two months to complete and pays 1,500 Afghanis (around $17). Habibi has been charging Aydeh 300 Afghanis instead of 500 Afghanis for the classes to encourage her to continue, but she says it is still too much, given her family commitments. “I travel an hour to come here. I think I can earn a living from arts at home but I just don’t know if I can afford it,” Aydeh says.

Habibi is one of the most recognised artists in Herat, and his classes—art, penmanship and calligraphy—were among the most respected and sought-after in the city. However, as the government changed, Habibi found himself in fear for his future and whether he would be allowed to continue by the new rulers.

Disconcerted, the 55-year-old met with Herat’s new director of the Ministry of Information and Culture, Naeem-ul-Haq Haqqani, to seek clarity. The meeting was positive. He received no instructions to stop depicting live creatures and Haqqani did not object to his classes for women, as long as they were segregated. (Habibi had always held courses on separate days for men and women to cater to Afghanistan’s conservative society.)

However, with the country’s economy devastated by crippling sanctions, art classes became a luxury that most of Habibi’s students could no longer afford. Undeterred, he teaches most students at discounted prices which often place him in a difficult position, as he needs to support his own family. Although he teaches human anatomy to his students, and several can be seen practising drawing or painting faces, he says he will still not display portraits in the gallery. Habibi hopes to be able to hold his annual exhibition for his students in a few months to cement their interest in art further, but he has to find the funds first.

More than 800km away in Kabul, another artist is trying to make a living by navigating his way through the uncertainties of the country’s art scene. Over the last four months Jawad Paya has moved to a new gallery located in a basement of a two-storey building in Kabul’s Karte Char neighbourhood.

Although there have been no official restrictions announced on visual arts, most artists avoid humans in their work as they believe there are those among the Taliban who consider this un-Islamic. In the city, most portraits have been removed from public view. However, there are the occasional gigantic posters featuring male models, or rugs featuring women, still present. Paya continues to showcase figures in his gallery and so far he has not had any problems, but he says that could all change.

He was forced to close his gallery of five years, Paya’s Art and Cultural Centre, due to financial challenges that left him unable to pay the rent—a common situation in Afghanistan. The new venue does not charge him rent but will instead take 60% of the proceeds from his art courses. He can keep 100% of his art sales. However, he is struggling to find students and to sell his art.

“There are two reasons for the lack of art sales. First, the poor economy and then the lack of foreigners,” says Paya. “Previously, foreigners, especially from the embassies, purchased large quantities of art, but they are all gone. Afghans mainly purchase portraits, now they either can’t afford it or they avoid it for fear of it being perceived as un-Islamic,” he says.

At his new centre he has eight students, five women and three men, who he charges 500 Afghanis per month instead of the 700 to 1,000 Afghanis he used to charge.

After the closure of his gallery and loss of his livelihood, Paya suffered from depression for months. Finally, with a group of artists, he approached the Ministry of Information and Culture to obtain clarity. They were not given any explicit restrictions and got the go ahead to continue working. With the ministry’s permission they even held a competition for artists in which a woman won first prize of 8,000 Afghanis, which was raised by the group themselves.

The Queen’s image: how portrayals of Elizabeth II changed over her lifetime

Lauren Poitras's film, which follows Goldin's campaign against members of the Sackler family, has been nominated in the Best Documentary Feature category