Home News Art Shows to See in Paris This Fall 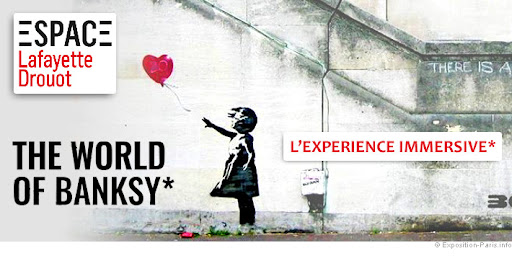 Today, art and culture have never seemed so important to us. Nothing beats a trip to a museum to discover, stimulate the imagination, or simply daydream.

Paris museums have a wide variety of exciting exhibitions for 2021, from great masters to fashion icons, from contemporary art to popular cinema. Support the culture and enjoy!

‘The World of Banksy’ at l’Espace Lafayette-Drouot

An enchanting and immersive journey with this street art master who has become a world-renowned artist while keeping his identity a secret. On an area of ​​more than 1200 square meters, you can see about 100 works of the king of graffiti. He planted his style on the streets of the world and left his mark on the doors of Bataklan after the 2015 attacks. The Paris art show features a reproduction of the famous Santa Ghetto, created in Bethlehem in 2005.

‘Picasso-Rodin: the double exhibition’ at the Musée National Picasso and Musée Rodin

“Two artists, two museums, one exhibition” is the concept for this Paris art show. This is a meeting between Auguste Rodin (1840–1917) and Pablo Picasso (1881–1973), two sacred figures of contemporary art who disrupted the artistic practices of their time. The intersection of their creative process highlights striking and unexpected coincidences in their works and experiments. One of them is an expressionist, and the other is a cubist.

A fascinating cross-reading was displayed simultaneously at the Musée National Picasso-Paris in Marais, as well as in the magnificent gardens and exhibition halls of the Musée Rodin.

‘Dali: the Endless Enigma’ at the Atelier des Lumières

Illuminated by his famous unique works, Salvador Dali could not have dreamed of a more beautiful exhibition space than the Atelier de LumieThe   Paris art show provides an insight into the endless enigma of the Catalan master who traveled and invented several artistic styles. Paintings, drawings, and photographs projected and brought to life on the floor and walls 10 meters high reveal the details of the strokes, lines, and play of materials of the mustachioed artist.

This museum in Paris also shows his obsession with the weird and the supernatural, as well as his fascination with his wife Gala. Pink Floyd creates the background music for this timeless journey that promises to awaken the unconscious.

In order to mark 200 years of the death of Napoleon, this Paris art show was created in collaboration with the National Museum and the Grand Palace. retraces the life of the first French emperor. For the first time, more than 150 original objects have been collected to tell the fascinating story of a man no less admirable than controversial and to paint a portrait of the era that marked the beginning of modern France.

Between the throne room and the country pavilion, Parisian salons and battlefields, impressive reconstructions depict Napoleon’s imperial life before his death on Saint Helena on May 5, 1821.

Vivian Mayer was one of the greatest photographers of the 20th century and had an extraordinary career. She closely monitored American society and photographed the streets of New York and Chicago. This Paris art show provides access to the unpublished archives of the photographer, discovered in 2007.

Aren’t there certain boundaries beyond which humanity runs the risk of being in danger and losing itself? This is a very pertinent question that At Human Boundaries will try to answer, or at least provide some elements of understanding. The inability to reduce a person to one definition will be the main theme of this Paris art show, as well as his ability to pursue the quest for reinvention and transcend himself.

The National Museum of Natural History is offering exciting science exploration. Visitors will jump on the screen and become the protagonists of an expedition that awakens all the senses. This is an innovative hybrid entertainment format, between a cinema and a giant immersive installation. Visitors of this Paris art show have the opportunity to enjoy the breathtaking beauty and richness of all forms of biodiversity.

‘Botticelli’ at the Musée Jacquemart-André

Following the colorful harmonies of Signac, which will be on display until July 19, the Jacquemard-André Museum will end the year in style, glorifying Sandro Botticelli. This Paris art show will feature some 40 works by the Renaissance master and some of his Florentine contemporaries, highlighting the importance of studio practice in Botticelli’s production as a creator, entrepreneur, and teacher.