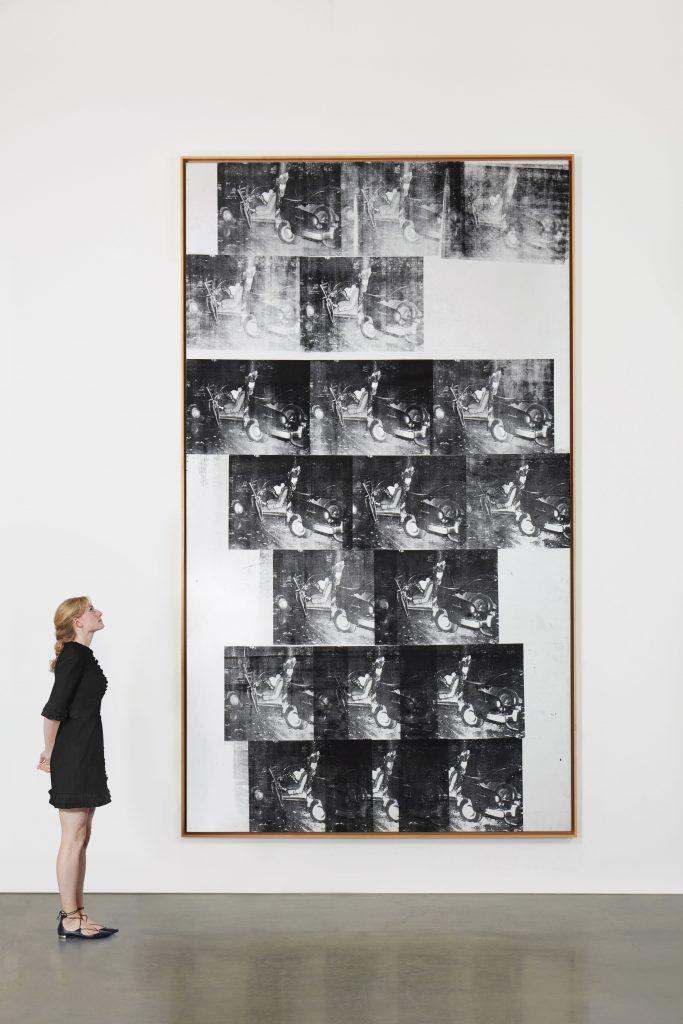 The upcoming fall auction season is already shaping up to be a potentially historic one, with more than $1 billion worth of artwork on offer. Now, the grand total could be even higher, thanks to Andy Warhol.

The pop artist’s White Disaster (White Car Crash 19 Times) (1963) is hitting the block at Sotheby’s contemporary evening sale on November 16, with an estimate in excess of a whopping $80 million. The work, a haunting manifestation of Warhol’s macabre obsessions from his 1960s “Death and Disaster” series, features—as the title implies—19 reproduced images of a tragic car accident screen-printed on a large panel. The painting is based on a lurid photograph that ran in an article about a horrific car accident published in magazine on June 3, 1963, and deserving of the old adage “if it bleeds, it leads.”

This is the first time in nearly ten years that one of Warhol’s “Death and Disaster” paintings has come to market. In 2013, sold at Sotheby’s for $105.4 million—at the time the highest price ever paid for the Pop artist’s work at auction. In May 2022, Warhol’s 1964 Shot Sage Blue Marilyn sold for $195 million at Christie’s, becoming the second-highest result for an artwork at auction, and the new high-water mark for the artist.

Vertically oriented and measuring 12 by 6 feet, the canvas is one of Warhol’s largest single panel from the series. As in all of the “Death and Disaster” series, the repetition Warhol employs both dulls and multiplies the horror, while also underscoring the pervasiveness of the mass media and the constant churn of the news cycle. It also, according to art historian John Richardson, is tied to the artist’s Catholic faith, and the ritual of attending church and confession.

White Diaster has an impressive provenance, having been originally owned by Stable Gallery, where Warhol’s first Pop Art show was held. It first hit the auction block at Christie’s just two and a half months after Warhol’s death in 1987, where it was purchased by Swiss mega-collector Thomas Ammann for $660,000.

It was later in the collection of Dia Art Foundation founder Heiner Friedrich, and has appeared in museum exhibitions around the world, including the Whitney in New York, the Centre Georges Pompidou in Paris, and the Royal Academy in London.

It returns to public view for the first time in more than 15 years when it goes on display at Sotheby’s New York galleries from November 4–16.