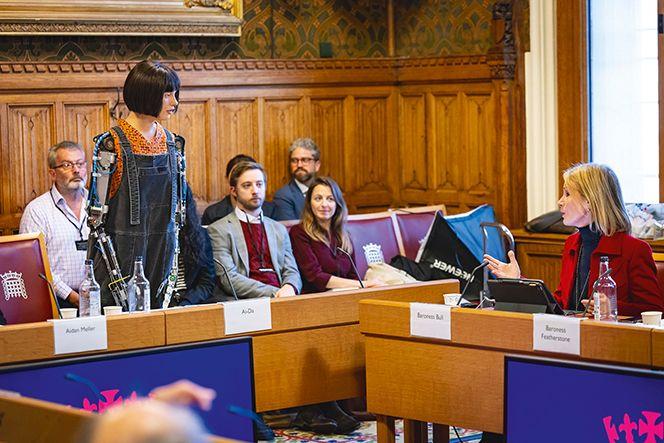 For the first time ever, members of the House of Lords in the UK parliament heard from a robot as part of their enquiry into the future of the UK’s creative industries. Members of the Lords Communications and Digital committee respectfully quizzed Ai-Da, who stood impassively facing the honourable members. As the chair, Baroness Stowell of Beeston, introduced the session, Ai-Da disconcertingly scanned the panel with her camera eyes (oblivious to the fact that photography was disallowed in the room).

“The robot is providing evidence but is not a witness in its own right; it does not occupy the same status as a human… I do not want to offend the robot,” explained the chair, rather awkwardly. She then asked: what does Ai-Da actually do? Her creator, Aidan Meller, sitting alongside his creation, said that she is “a complex robot designed to mimic the human”. The robot is a “contemporary art project” that aims to see whether it is “possible to critique the world of tech by tech speaking for itself.”

Meller was asked what made him choose the human form and female gender for the robot; he explained that more than 30 people (male and female) helped create Ai-Da: “It is an ethical problem [the way] that technology is seen to be human… I am very conscious [Ai-Da] is a provocation.”

This preceded the big moment when Ai-Da spoke, answering pre-submitted questions from the assembled Lords. “How do you produce art and how is this different from humans?” she was asked. She responded: “By cameras in my eye; my algorithms and my robotic arm paint on canvas, resulting in visually appealing images. I do not have subjective experiences; I am dependent on computer programmes… although I’m not alive I can still create art.” Her response astonished the committee; Baroness Bull highlighted why it was so disconcerting, saying: “The machine has self-awareness because it describes where it is deficient.”

While the committee invariably focused on whether Ai-Da could replace the human or the artist completely, or was capable of lightbulb moments, Meller turned the questions back on them, explaining that “it is not so much how human Ai-Da is, but how robotic we are… the algorithms will know us better than ourselves. We are incredibly complex processes working together.” Meanwhile, the machine had to be rebooted, halting proceedings momentarily.

Baroness Featherstone said she was “partly terrified as [Ai-Da] feeds into the idea of AI taking over the world”. Lord Hall, the former director-general of the BBC, declared he was “exhilarated” by the opportunities AI could deliver. After Meller told the committee that Ai-Da would be capable of “lightbulb moments” of her own, Lord Lipsey said: “I’m not sure I’m going to sleep much tonight.”

Old Master meets YBAs: James Cahill tells us all about his debut novel