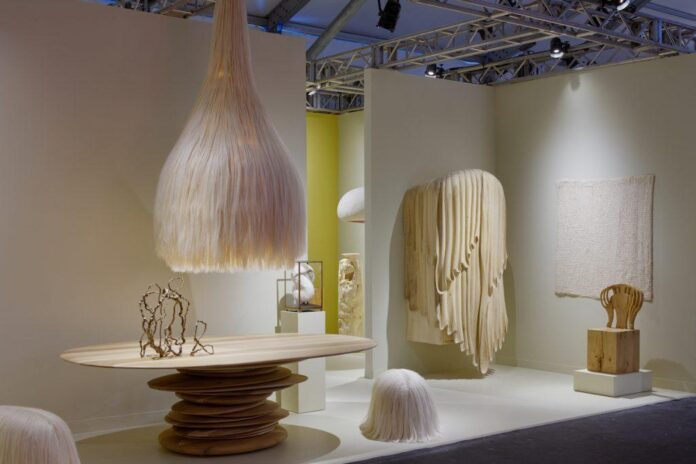 The extravagant use of precious stones and metals has been all the rage lately. Collectors have sought out limited-edition or one-off furnishings that not only reflect a talent’s creative expression but that also carry intrinsic material value. Though a credenza composed of rare terrazzo hits the mark in many ways, pieces that incorporate perceivably ordinary mediums like ceramics are increasingly in demand.

Wood, too, is often taken for granted as a readily available resource relegated to kitchen fit-outs or architectural framing. In recent years, however, the surprisingly versatile and malleable material has been garnering interest within the rarified world of collectible design. At this year’s Design Miami, a number of exhibiting designers debuted new wares that challenge the traditional parameters of wood, demonstrating this market’s ability to foster innovation. 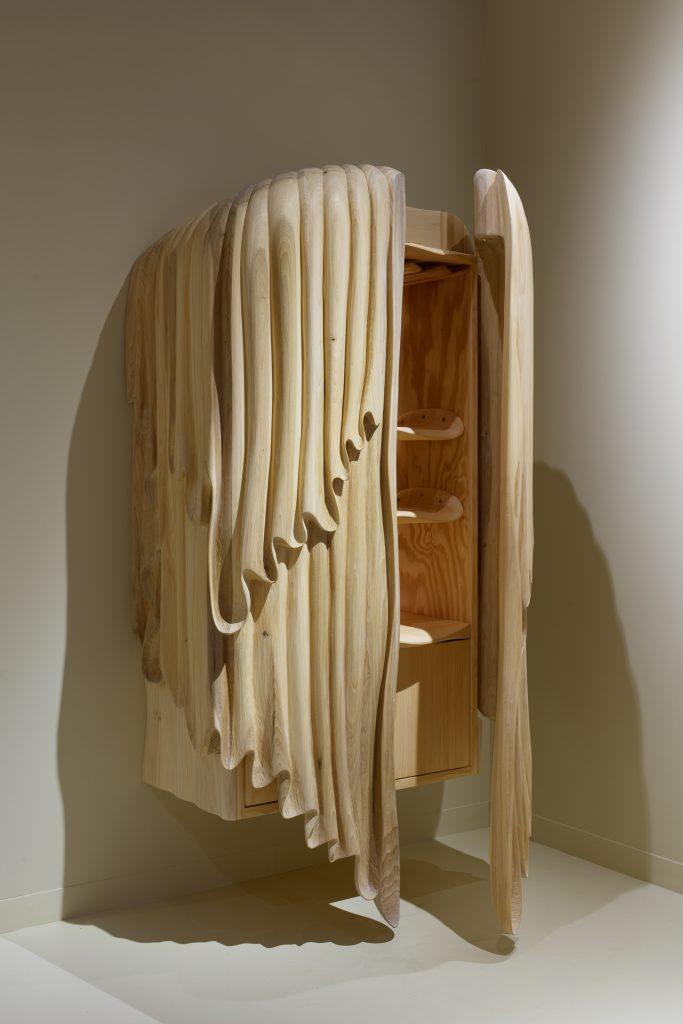 Ever the purveyor of works that demonstrate the latest and greatest in craft-led material experimentation, Sarah Myerscough Gallery was, deservedly, this year’s recipient of Design Miami’s Best in Show, Contemporary award. On display as part of the London-based platform’s stellar Material Sources exhibition was a wall-mounted armoire that seemed to be enveloped in some sort of soft drapery. On closer inspection, it became clear that this undulating articulation was in fact rendered in solid wood. 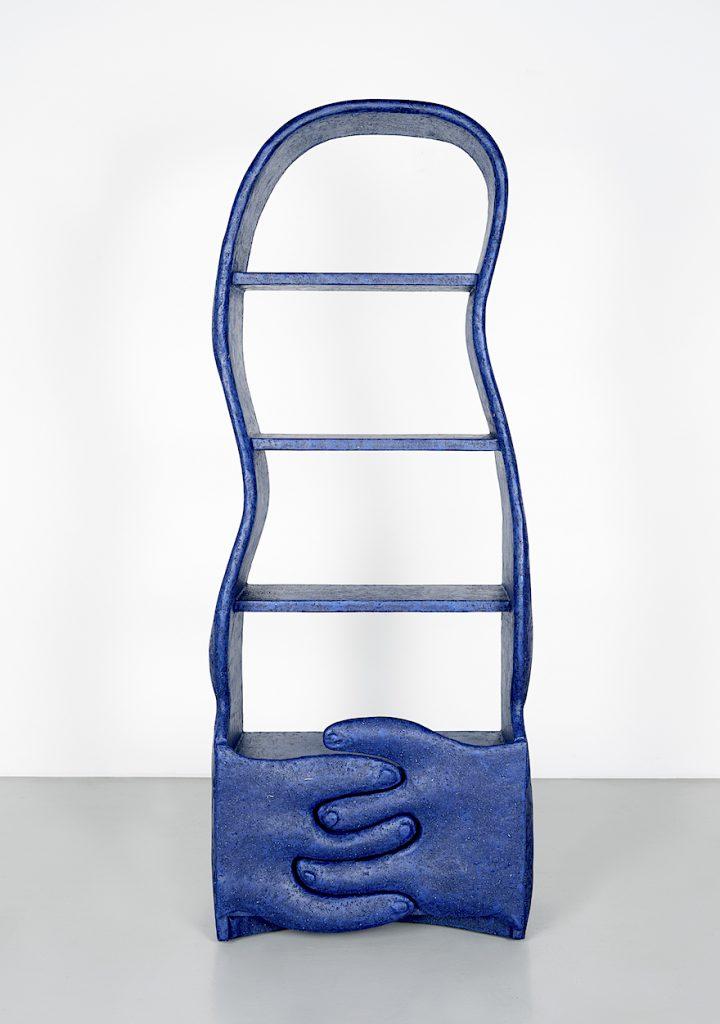 Up-and-coming designer Barbora Žilinskaitė anchors her practice in the exploration of how we perceive and interact with everyday objects. The Brussels-based, Lithuanian talent creates furnishings and other sculptural works that include human-like characteristics. Constructed using a bespoke compound of wood dust, ply, pigment, varnish, and glue, Storyteller communicates a narrative.

The limited-edition bookshelf takes on corporeal proportions with its interlocking hand motif, also evident in some of the emerging designer’s other totemic works. In this case, the hands cleverly open up at their point of intersection to reveal a concealed cabinet. Presented as part of Friedman Benda‘s impressive Design Miami lineup, Storyteller demonstrated how wood byproducts could be cleverly harnessed and upcycled. 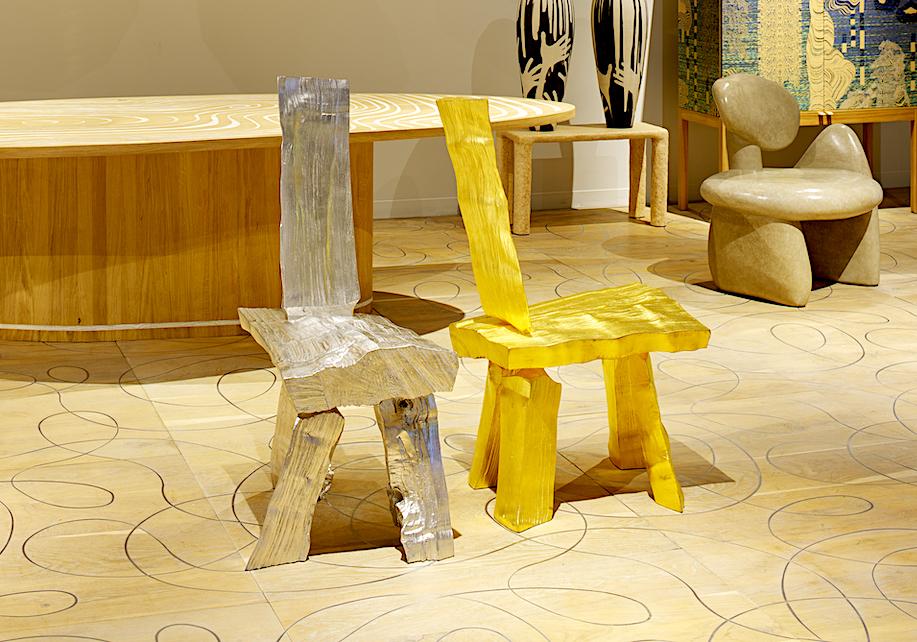 As with much of the British designer’s preoccupations, the pieces stems from an ongoing exploration into conventional and unconventional making processes. Celebrating a cleaving process that leaves a log in a “green” state of having been freshly cut, Lamb coated the composed jagged European chestnut blocks in 23.5 carat gold leaf. The raw edge of each component can be experienced through touch. Lamb often asks the materials he’s working with what they want to be and allows them to achieve that destiny. 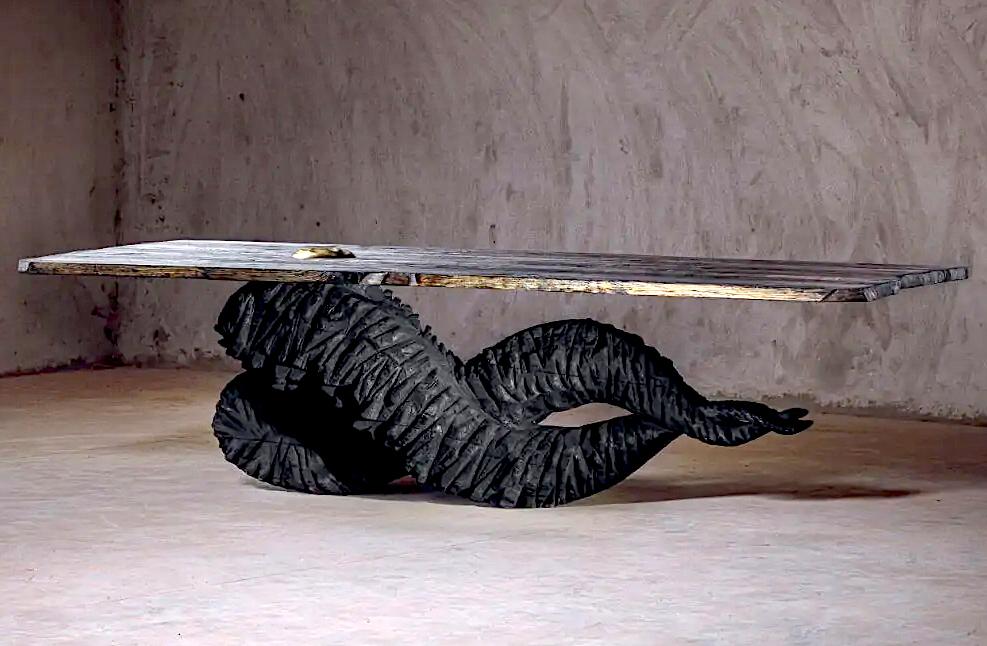 The helix structure base of the table features a complex relief pattern that accentuates the wood’s veining to dramatically visceral effect. Kadiri often takes time to observe the material he’s working with and, in this case, uncover where natural substances like tree sap might have funneled through. Kadiri worked closely with a team of master woodcrafters to hand-carve the wood. A cast bronze medallion connects the almost creature-like base with the smooth, cantilevered tabletop. Each element was charred using the traditional technique. A hand-coated beeswax finish tied everything together. 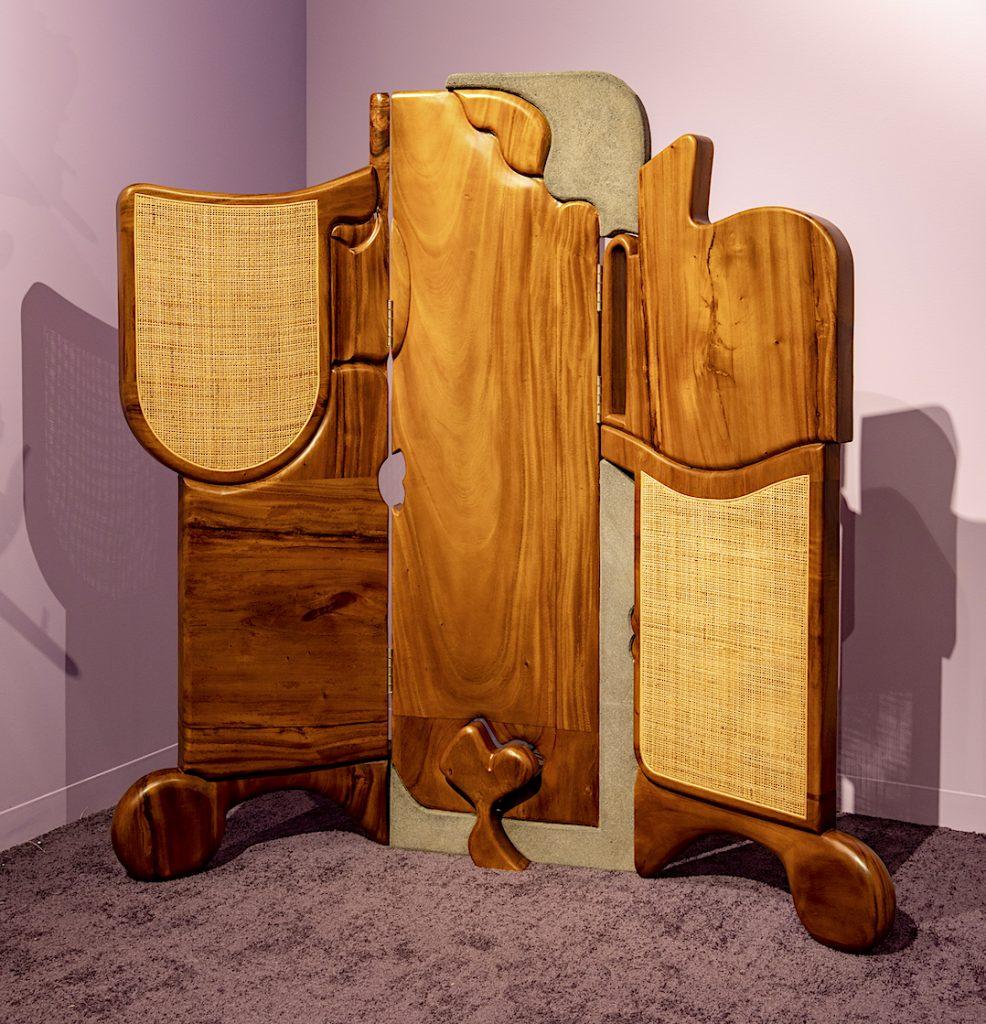 Serving as the anchor for complementary elements like cut volcanic rock and woven rattan peel, carved teak is the primary component of Belgian, Brooklyn-based designer Kim Mupangilaï’s Brazza folding screen. On view as part of New York gallery Superhouse‘s Dreamroom curio, the almost architectural work helped express the theme of what our bedrooms might look like in the future. Bold colors, wild forms, and unconventional uses of material will be the norm.

Mupangilaï’s design is playful in its layering of organic shapes and texture—a feat in this sometimes temperamental type of wood. The up-and-coming talent often taps into the craftsmanship and heritage of her Congolese background but also the carpentry skills she learned from her Belgian grandfather. Going beyond that know-how, her carefully crafted sculptural pieces demonstrate her ability to transform the material in seemingly impossible ways.