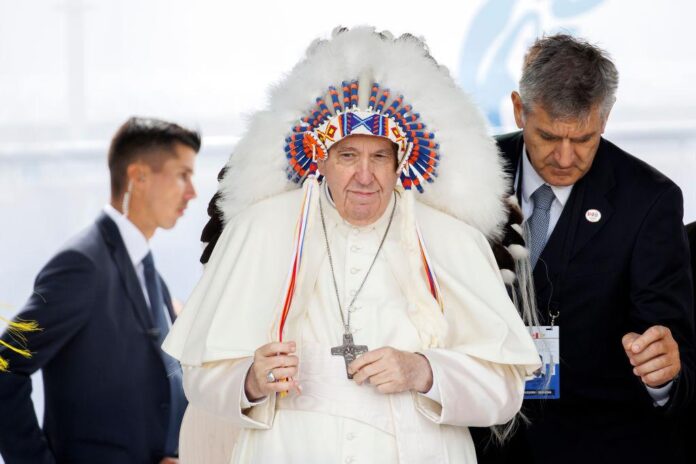 Members of Canada’s Indigenous communities are calling on Pope Francis to oversee the return of some of the tens of thousands of First Nations objects in the Vatican Museums they say were acquired suspiciously.

The calls come as Francis arrived in Canada for a six-day tour that included a formal apology for the Catholic church’s role in the country’s residential school system, through which more than 150,000 Indigenous children were forcibly removed from their homes to be assimilated in Christian schools.

A Canadian commission found that more than 10,000 of the children died in the schools, with many of them buried in unmarked graves.

“Children were abused, physically and sexually, and they died in the schools in numbers that would not have been tolerated in any school system anywhere in the country, or in the world,” according to the National Truth and Reconciliation Commission.

“I humbly beg forgiveness for the evil committed by so many Christians against the Indigenous peoples,” Francis said.

But the question of what to do with the Indigenous objects at the Vatican, which formally belong to the Anima Mundi museum, remains a point of contention. 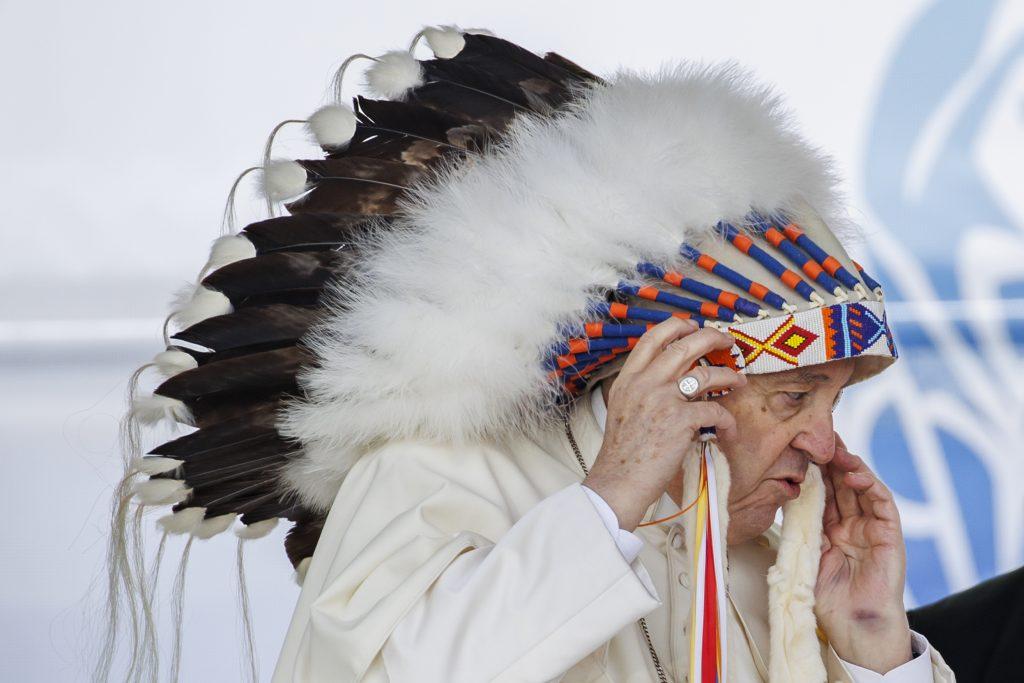 Pope Francis wears a traditional headdress that was gifted to him following his apology during his visit to Maskwacis, Canada on July 25, 2022. (Photo by Cole Burston/Getty Images)

“These pieces that belong to us should come home,” said Cassidy Caron, president of the Metis National Council, who headed a recent delegation asking the museum to return items including a feathered headdress, carved walrus tusks, ceremonial masks, and embroidered animal skins that she claims were taken under suspicious circumstances, but which the Vatican insists were gifts.

Caron says that many of the objects were acquired during a Catholic mission sent to Canada in 1925, ahead of what was billed as a major exhibition of First Nations artifacts to be held in the Vatican gardens that year.

Several objects within the collection, critics say, are tainted by their connection to the history and violent legacy of the residential school system.

“They [the objects held by the Vatican] are not being given the respect they deserve by being named in any way,” said Margo Neale, who curated the Vatican’s 2010 Aboriginal exhibition as head of the Centre for Indigenous Knowledges at the Australian National Museum.

“They are beautifully displayed but are culturally diminished by the lack of acknowledgement of anything other than their ‘exotic otherness.’”

The Anima Mundi museum also includes pre-Columbian artifacts sent to Pope Innocent XII in 1692; a set of devotional objects from Papua New Guinea collected by Father Franz J. Kirschbaum in the 1920s; 200 objects from Indigenous Australians, including 10 funeral poles from Melville Island of the Tiwi Islands; as well as a number of ceremonial and burial objects from Canadian First Nations groups.

Pope Francis continues his tour of Canada through July 30.

Politician Claudia Roth to Be Germany’s Next Culture Minister