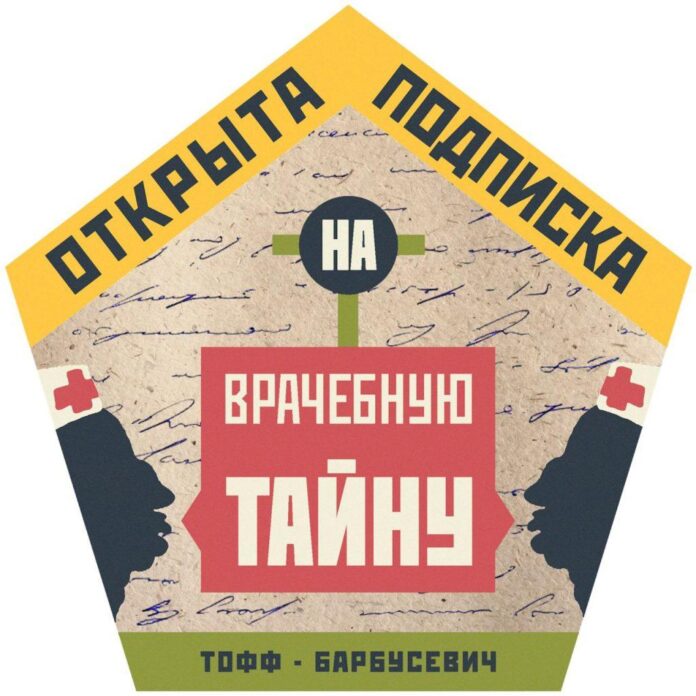 Attending Cosmoscow last year felt like tapping into the pulse of the Moscow art scene. Queues were long, performances pushed political boundaries and there was an industrial chic vibe, as well as the largest gallery participation in the fair’s 10-year history. This year, however, exhibitors were down to 72 galleries (from 80), and they were all Russian, though 13 booths showed works by international artists.

Due to Russia’s invasion of Ukraine, I could not attend the fair (which ran from September 14-18) in person. Instead, I reconnected with those dealers I had met in 2021 and asked a friend, Moscow-born cultural advisor Aleksei Afanasiev, to talk to new participants on the ground.

It is telling that Art & Brut brought the acid-colored glitch-pop aesthetic of Ukrainian artist Alexander Zabolotny to the fair again this year, now with a dramatically changed context. His artist statement says, in part: “I have never been attracted by trauma (although I have to reckon with its inevitability).” 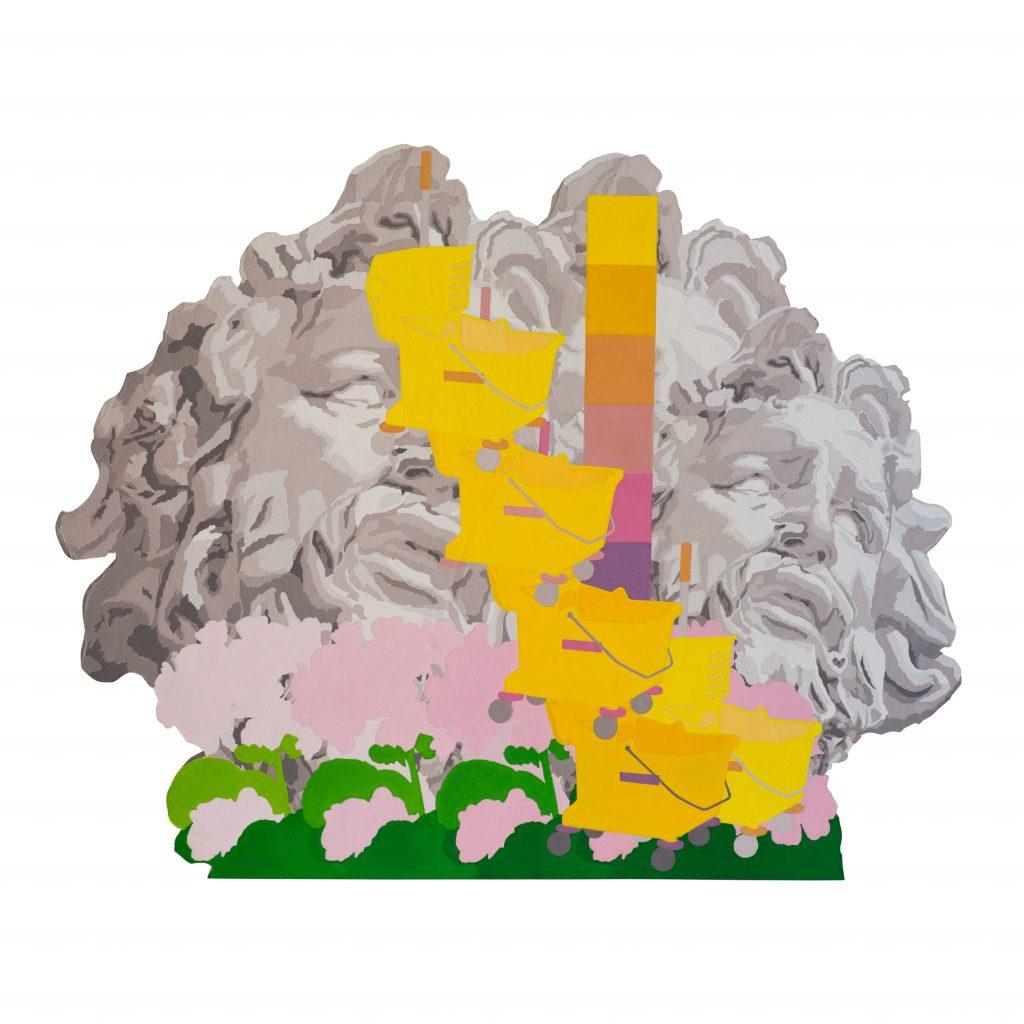 Zabolotny has moved from his former studio base from Russia to Turkey, but, according to the gallery’s co-founder Irina Markman: “The current political crisis, though appalling, hasn’t broken our close relationship with Alexander.”

Through my outreach, however, I discovered that Fragment gallery, which was behind a peeing performance at last year’s fair by the artist Dagnini, has permanently relocated to New York; Anna Dyulgerova, a co-founder of Blazar, Cosmoscow’s satellite fair of affordable art (September 13-19), moved to Berlin; and Nadya Kotova, an Antwerp-based dealer focusing on Russian contemporary art, opted not to participate partly because she was advised by her Belgian peers that it would be interpreted as supportive of Russia’s war against Ukraine.

According to Cosmoscow’s founder Margarita Pushkina, continuing with the fair was a collective decision—and not an immediate one. The event only sent out its call for submissions in June. “Of course there were different opinions,” Pushkina said. “People commented on social media, noting that the entertainment nature of the event was inappropriate at this time.”

“However, it is important to understand that many peoples’ lives are tied with the fair professionally,” she added. “The response from our community was very supportive, and after a long time of reflection, our gallerists and artists plunged into work.”

Vera Glazkova, who established Arka gallery in 1995 in Vladivostok, a region bordering China and North Korea—and naturally focuses on the Asian market—agreed. “It’s important to continue working,” she explained of her decision to be among a handful of galleries showing at Cosmoscow for the first time. 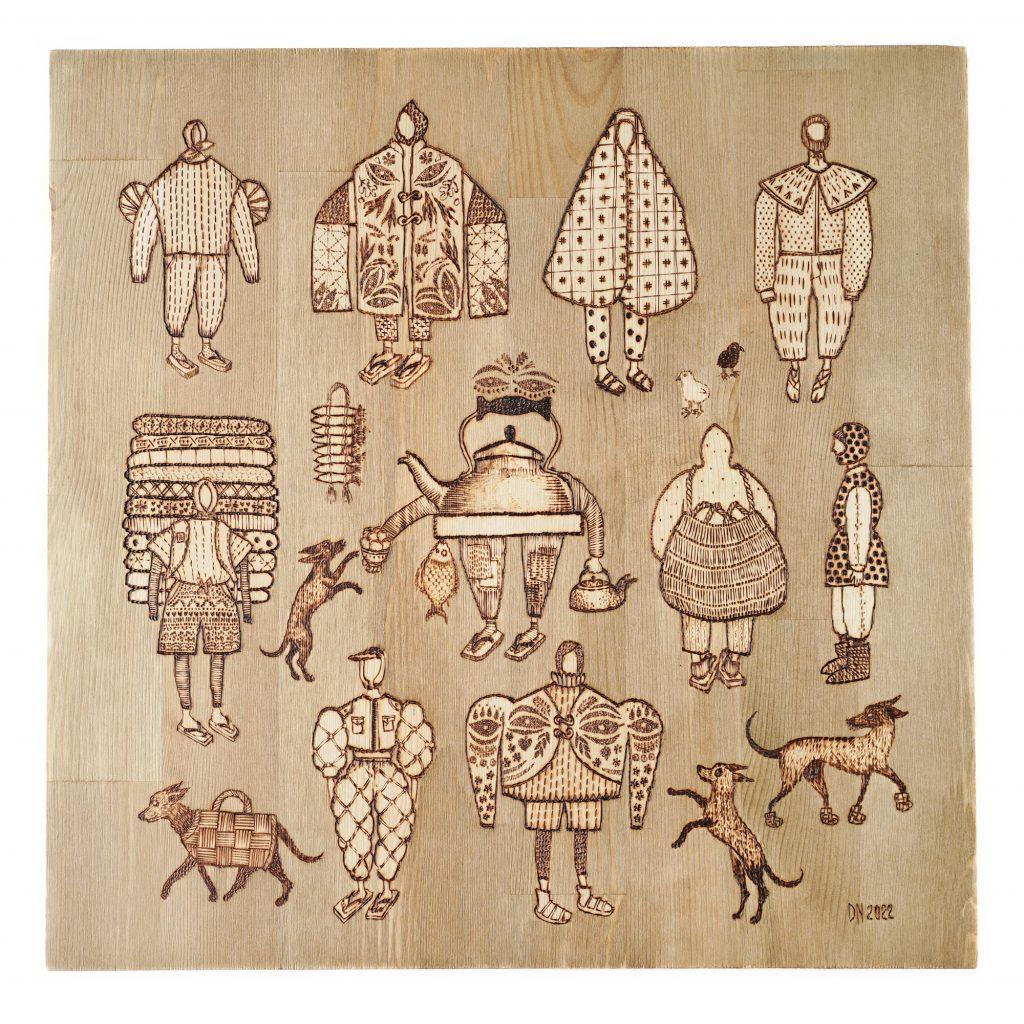 The decision whether or not to participate in the fair was a complicated one for many dealers, and art world professionals tend to be divided about the effectiveness of cultural boycotts, since it makes a country’s creative sphere pay for a government’s sins. Olga Temnikova, of Tallinn-based Temnikova & Kasela gallery, for example, decided not to participate in Cosmoscow this year because of the war. “But we are not cancelling Russian culture in any way, since none of the artists or curators I know support the current regime,” she added, “And for this reason, the opposition needs all our support.” 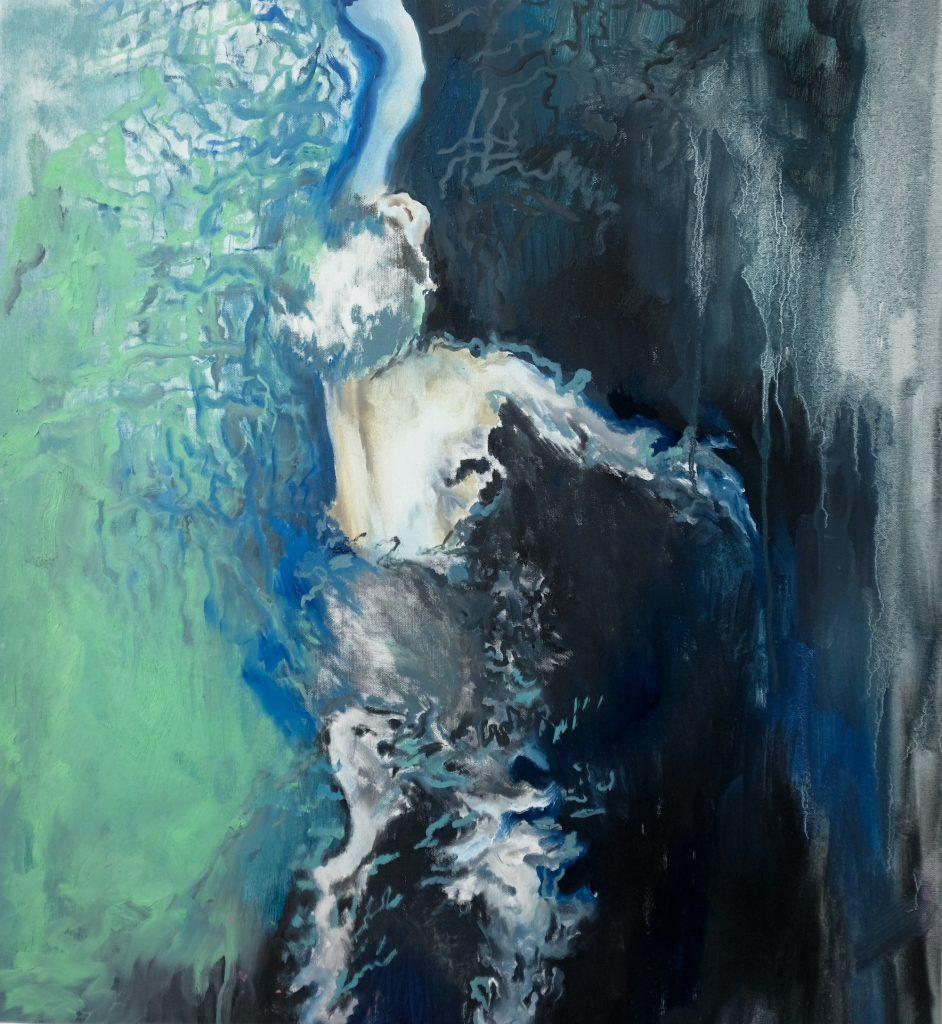 Aleksandr Blanar, a curator working with Shilo Gallery, another Cosmoscow first-timer said that “many artists question whether they have the right to continue their activity, because there are risks of clashing with the authorities if you speak up. Some artists covertly make statements about the war, while others just continue their work to distract themselves from the reality.”

Artwin gallery took the opportunity to take a closer look at this reality by inviting a group of their artists to create new works for the fair. “It feels like the main concern for artists at the moment are the issues of freedom and the opportunity to express one’s opinion,” said the gallery’s owner Mariana Guber-Gogova. Her booth included works, such as framed mirrors with scratched-out centers in fluorescent green by Evgeny Granilshchikov. “An attempt of a statement is possible even in a vacuum, and perhaps in this vacuum it is especially important,” Guber-Gogova said. “We’ve never encountered any censorship—whether it will continue to be so is the question.”

Still, several artists did incorporate more overt statements in their work. There was Osip Toff’s signboard art at Ural Vision’s booth, which included quippy phrases like “Yesterday is over”; Alexander Kipsone’s spray-painted canvas 14,600 Days in the Desert, which included the word ANGER in all caps, on view at DiDi, a St. Petersburg gallery known for showing avant-garde artists from the 1950s; and text-based iconographic compositions by Cosmoscow’s Artist of the Year Valery Chtak, which featured phrases like “Only the truth” or “There’s no choice.” Whether these works are seen as subversive or not, their impact was too subtle to elicit any prohibition from government officials. 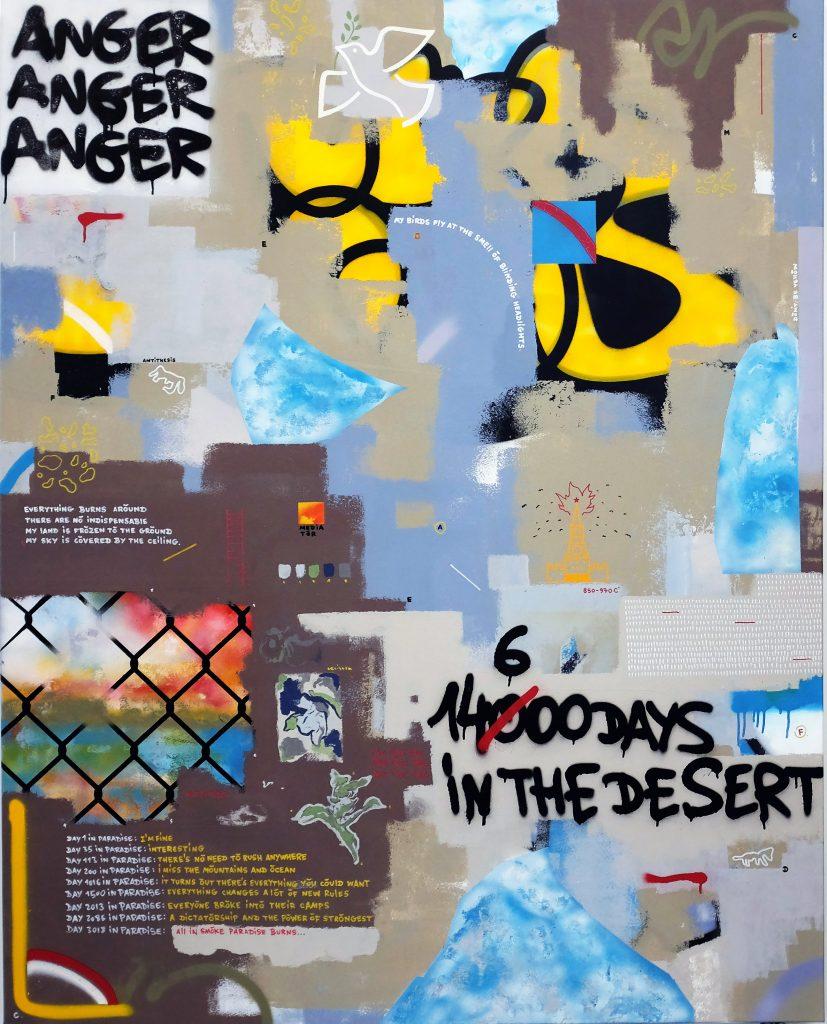 According to gallerist Ekaterina Iragui who has participated in Cosmoscow from the first edition, “Contemporary art remains one of the few independent resources to activate thinking. What happens cannot be dictated or controlled.” While she admitted that there are instances of self-censorship by the country’s artists and art spaces, the Cosmoscow fair is “the only free platform of such a scale” for Russia’s contemporary art scene. “On opening night, the hugs were stronger than ever,” Iragui added. “I could feel that people’s relationships have strengthened. Everyone was happy that such a platform still exists.”

Other standouts at the fair included Vladislav Efimov’s textural, meditative photographs of forests at Pennlab gallery and Alexander Lemish’s ironic digital paintings such as Pizza with precious stones at Fabula gallery, most of which sold for up to $5,000. Kirill Gashan, known for his Soviet-style hyperrealism, was showing his striking “Bestiary” series of animal portraits in haunting environments at Szena gallery. Four of the works sold on the first day of the fair for between $6,000 and $12,000. 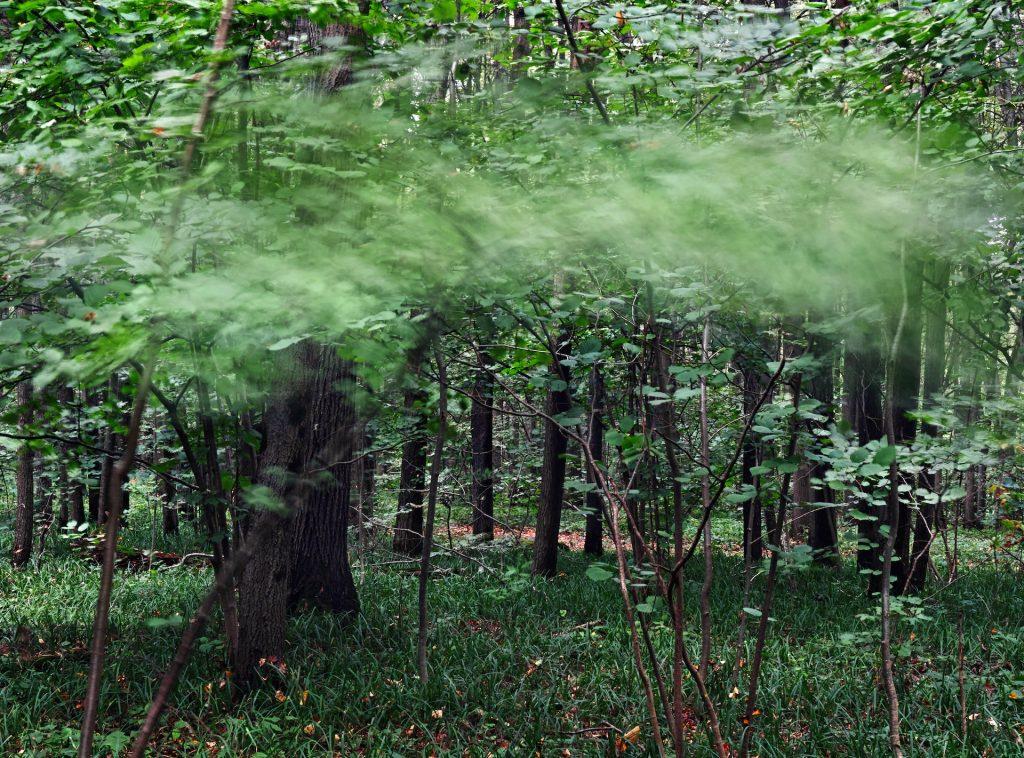 “I think now is a difficult time for young Russian artists, who can only rely on financial support from within the country, which is very limited,” said Szena’s director Anastasia Shavlokhova. “The responsibility mainly falls on the galleries to act as micro-institutions, and not just sell the works, but also look for fundraising opportunities and realize museum-grade exhibitions in their spaces.”

The digital sphere has been bringing in new sources of funding to Cosmoscow, with the online bank Tinkoff Private and the Swiss-based tech company 4ARTechnologies (which owns a collection of works by Andy Warhol, Kevin Abosh, Ai Weiwei, and others), collaborating with local galleries and institutions on NFTs.

The digital art section of the fair has also become a permanent feature (and not just a special project), curated by the art collective Instigators. This year’s edition saw exciting themes such as the digitization of ancient skulls by Russian NFT artist Kirill Rave, and children’s toys viewed as the first avatars, in a collaboration between Uzbek multimedia artist Denis Davydov and Georgian-American artist Uta Bekaia. 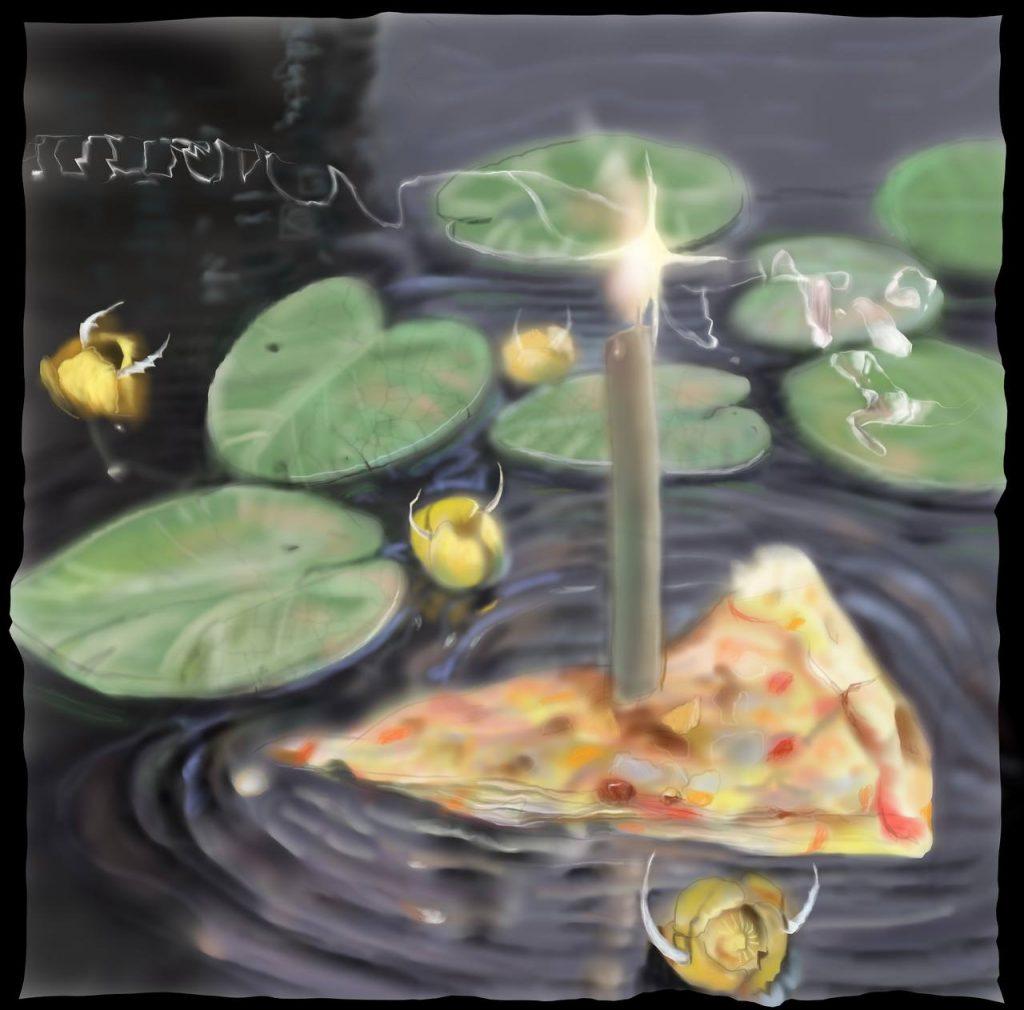 By many accounts, there was strong local buzz about the fair this year, with public figures attending as well as the usual art-world suspects, such as museum director Shalva Breus of the Breus foundation and recently announced Museum of Contemporary Art in Tbilisi.

Sales were comparable to last year’s $2.7 million, indicating that Russian collectors are still primarily buying Russian art. But with the recent resignation of the fair’s artistic director, Simon Rees from New Zealand, and foreign sponsors like Ruinart, Breguet and Audi pulling their funding, it remains to be seen how much Cosmoscow can buffer the war’s impact on the country’s artist community. And, in turn, how isolated that community will become from the international scene.

“The international art community was very supportive to me personally,” Iragui added, “and I can say that personal relationships prevail mainstream or government-led opinions.”

Japan Boasts the World’s Third Largest Economy. So Why Does It Still Have a Disproportionately Small Share of the Global Art Market?

Anna Delvey, Out of Jail but Still Under House Arrest, Pulled in More Than $300,000 From Her Art This Year